When I heard Dileesh Pothan’s new film Joji being described as a “Macbeth adaptation”, I mailed the information to my film-club group (with whom I had discussed cinematic treatments of Macbeth just last month). I hadn’t watched Joji at the time, but had heard good things about it, which wasn’t surprising: it stars Fahadh Faasil, who has been one of the most admired Indian actor-producers of the past few years; Pothan himself had helmed two slice-of-life films I enjoyed greatly – Maheshinte Prathikaaram (Mahesh's Revenge) and Thondimuthalum Driksakshiyum (The Mainour and the Witness) – in addition to being associated with Kumbalangi Nights, Ee.Ma.Yau., and other films that have helped create the huge recent buzz around Malayalam cinema; and Syam Pushkaran, who co-wrote Pothan's earlier films as well as Kumbalangi Nights, also wrote Joji. 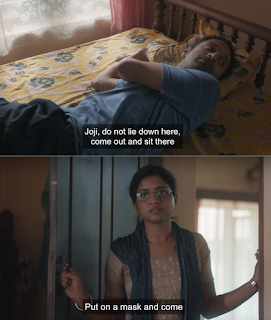 When I did get around to watching Joji, there were little moments that struck me immediately as Macbeth homages, e.g. the witty scene where Joji’s sister-in-law Bincy tells him to “put on a mask and come” (outside his room, to participate in a ceremony for his dead father). With the story playing out in a Covid-19 world, “put on a mask”  is a practical instruction — but it is also a nod to the many mask references in the play. (“False face must hide what the false heart doth know.” “…make our faces vizards to our hearts/ Disguising what they are.” And of course: “Your face, my thane, is as a book where men may read strange matters ... look like the innocent flower, But be the serpent under it.”)

And then there’s a wry take on Lady Macbeth’s “Out, damn spot”. Bincy at the washing machine in a pivotal scene – and later issuing another instruction about washing clothes. 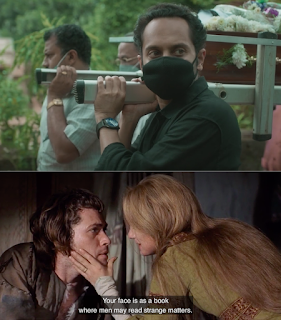 Fun as it is to play this connect-the-dots game between Pothan’s film and Shakespeare’s play, and much as I enjoyed Joji on its own terms, I ended up puzzled by how many people were rushing to label this a "Macbeth adaptation" – even if Pothan was inspired by the play and wanted to pay tribute to it. This film doesn’t really play like a spiritual descendant of Macbeth, and I wouldn’t have thought of it in those terms if it hadn’t been for all the publicity (including the pre-credits acknowledgement). Too many little points to mention [with the big differences in plot being the least important], but here’s a relevant one made by one of my film-club members Meet Modi: the Joji character isn't internally conflicted — remorseful or guilt-ridden — in the way that Macbeth is [I think of him as being closer in some ways to the pure psycho Faasil played in Kumbalangi Nights]. And once that conflict, and what it leads to, is taken away, how much of the soul of the play remains?

(Comparisons have also been made, story-wise, to King Lear; and someone on my Facebook post about the film suggested that Joji is more like Richard III in some ways – presumably because Richard is the Shakespearean character who is closest to the coldly amoral protagonist of this film. But this also implies that the film can quickly turn into a Rorschach inkblot where anyone can see any source text.)

All this, of course, brings us back to the old questions of what an adaptation is, and where the "essence" of Shakespeare lies – questions that have been raised even in discussions of films that follow the plot of a particular play much more closely than Joji does. Most of us can agree that the essence doesn’t lie in the plots, which were heavily borrowed from older sources. So is it in the actual language/poetry used in the plays (in which case a question mark hangs over even the canonised non-English adaptations by Kurosawa or Vishal Bhardwaj or Grigori Kozintsev), or in how character arcs and inner conflicts are brought alive through that poetry? Or in the juxtaposing of different tones, with scatalogical/slaptick comedy sharing a throne with deep tragedy?

Also: do we sometimes err by using "Shakespearean" in the most over-generalised sense to describe just about any story that is about a character grappling with strong negative emotions and moral conflicts? I’m not sure what the point of that would be.

All that said, Joji is a fine film with much to recommend it (though I’m not sure I liked it as much as Maheshinte Prathikaaram) – and if it encourages you to enter the particular world of Dileesh Pothan, or the broader world of Malayalam cinema, all the better. It is on Prime Video.