I have been working, on and off, on a nostalgia/memory project: some personal writing centred mostly on the late 80s and early 90s, when many intersecting events helped shape my life as a viewer, reader and writer. (Two of those: the birth of an obsession with old Hollywood in the summer of 1991, when I watched films like Psycho for the first time and bought my Leonard Maltin film guide; and the arrival in early 1992 of our first “satellite TV” connection, which opened doors to many new sorts of nourishing experiences, from music videos to daytime soaps. Have written about some of this before, for columns and features – but am trying to do it in a more free-flowing way, and as part of a series.)

Excavating the past has involved rereading my 1990s diaries, a process that can get very morbid if one does it for hours on end (it feels like one is in danger of being lost forever in another time) but also provides some strange epiphanies. When very old diaries are available for reference, you often find big gaps between the narratives you’ve constructed about specific incidents over time and how you actually seemed to experience those incidents when they happened.

Here are fragments from a diary entry from 30 years ago today. Friday, April 12, 1991, when Shashi Kapoor’s Ajooba was released:

“We finally managed to put it on at 3.45. At around 5, nani left the room, muttering to herself what a terrible ‘picture’ it was. I enjoyed it though I’m feeling bad that it will be a super-flop. (We’ll know for sure in about 15 days.) Shashi Kapoor really worked hard on it, and it’s sad that it won’t be appreciated.”

We had been waiting for the film for months, possibly even years, ever since reading in magazines about how this “expensive” “international” fantasy-adventure would be a game-changer for Hindi cinema; more technically polished than anything we had experienced before.

As was always the case in those days, I had bought the audio-cassette when it came out a few weeks before the film’s release – there was nothing too special about the Laxmikant-Pyarelal soundtrack but I spent hours listening to the songs and imagining how they would play out on screen: what would be picturised on whom, the order in which the songs would appear, the specific situations involved. The energetic “Chakdum Chakdum” was my favourite, and for the longest time I was sure it would be sung onscreen by Rishi Kapoor (Mohammed Aziz’s voice seemed a good fit for RK) – later, of course, I watched the film to find that the song was built around Saeed Jaffrey swaying about on a flying carpet with poor back-projection.

In those years I almost never watched films in a movie hall: this was partly out of laziness but also because a family unit made up of my single mother, her widowed mother, and an adolescent me wouldn’t have felt comfortable or safe going to a hall like the nearby Anupam as it was then, decrepit and somewhat shady, years before it became a PVR multiplex. So it was always a video-cassette, rented (usually on Friday evenings) from an uncle who ran a tiny video parlour in his scooter garage just a few feet from our building. As soon as he had got the VHS print (original, pirated, whatever) of whichever film was released that day, he set about making copies so he could rent them widely. On a day when there was something really in demand, like a new Bachchan film, he had a lot of work to do. 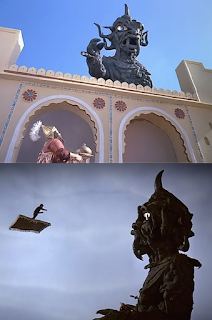 In the build-up to April 12, my friend Amit and I had told this uncle that we wanted the film as soon as we returned from school; on the afternoon itself, we must have been so pesky that eventually he invited us up into his own flat to watch some of the film while he was recording a copy for us (and also so we could ensure that nobody else got this copy before we did). Thus it was that before watching Ajooba in its entirety in my own house, I got to see parts of its final half-hour – and felt the first stirrings of disappointment when the giant metallic monster in the climax turned out to be a walking scrap heap with a doleful expression, looking more reluctant than scary when it picked up Shammi Kapoor in its huge claws.

Though the grand action setpieces that we had been anticipating were a let-down, once expectations had been dialled down I remember liking the overall pace of the film and some of its more regular narrative sections. At the same time, that diary entry about “enjoying it” may have been a defensive reaction to the bad press it was getting from everyone else (even from my mother, the most egalitarian of viewers and a big Shashi Kapoor-Bachchan fan). In any case there was almost no way that the actual film would have matched the version I had had playing in my head for days, having waited so long to see Bachchan in another masked-superhero avatar after his appearances in the Supremo comics. 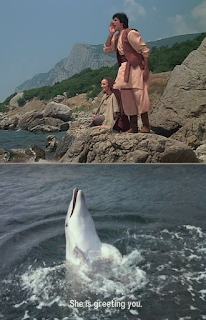 Today when I think of Ajooba (which I have never watched again in full), three images come to mind: that tragic-looking mechanical giant; a miniaturised Bachchan and Rishi Kapoor cavorting inside the blouses of their girlfriends; Bachchan referring to a dolphin as his mother (and more problematically, calling it a “machli”). These are all moments that have contributed to the current impression that many people have of Ajooba as a film that was always intended to be high camp; whereas those of us who were around then and tracking news about the film knew that it was meant to be an A-list epic on the grandest canvas, the Sholay of its time, or a proto-Bahubali. It didn't quite work out that way, and I remember feeling bad again a few weeks later when I read a self-berating interview of Shashi Kapoor – being more decent and candid than most others would have been in these circumstances – where he said he had "let down" the many people who had worked with him on the film.

The next few months, starting with May and June 1991, would be some of the most important in my life as a movie nerd – but more on that later in this series. For now, enough to say that the disappointment of Ajooba not being everything one had wanted it to be was a contributing factor to my leaving the world of Hindi cinema (for more than a decade, as it happened) and moving in other directions. So long, dolphin ma, I might have said while I was checking out, and thanks for all the fish.

(To be continued. Also, some trivia that can only be found in old diaries: in the week that I watched Ajooba I also finished George Eliot’s The Mill on the Floss, and read my first PG Wodehouse, which was Doctor Sally. And on one of those mornings, in school, a boy was sent out of the classroom for replying "Gandhi-ji" to the question "Who ordered the Jallianwala Bagh firing?")

Posted by Jabberwock at 1:09 PM