(Did this short review of The Longest Kiss: The Life and Times of Devika Rani, for India Today. Grateful for the book's existence, and for the amount of research done in putting it together, but mixed feelings about the actual writing.)
------------

Anyone who has researched Indian film history knows well the frustration of discovering that much of what they have to work with is hearsay, and that countless important documents are forever gone. Given this, one’s first response to Kishwar Desai's The Longest Kiss – a detailed account of two decades in the life of Devika Rani, pioneering actress and studio head – is to be glad for its existence. 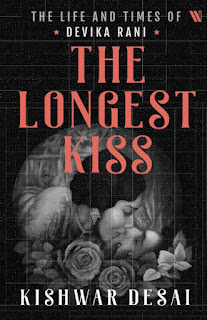 Though Devika lived till 1994, the period covered here is mainly from the late 1920s – when she met and fell in love with the actor-producer Himanshu Rai, with whom she would establish Bombay Talkies – to the mid-1940s, a few years after Rai’s death, when she married the Russian painter Svetoslav Roerich and quit the industry. This period, a pivotal one for Hindi cinema, included her stint as one of the first well-educated Indian women to become a film star; the deterioration of her relationship with Rai; and her later running of the studio in the face of many obstacles. Along the way, Desai offers a counter-narrative to the contemporary ones provided by Saadat Hasan Manto and others, who saw Devika as cold and calculating rather than as someone who had dealt with emotional and physical abuse in her personal relationship (along with the professional pressures of being a woman in charge in a male-dominated world).

“I had struck gold,” the author says in her opening note, referring to her discovery of the old papers that had carefully been preserved by Devika. But it couldn’t have been easy to make sense of thousands of documents and shape them into a coherent narrative. Some of that effort comes across in the finished book, which is occasionally swamped by much-too-detailed information about the Bombay Talkies board meetings, resolutions and legal skirmishes, with Desai’s accompanying commentary on the letters and documents.

Perhaps because she realised how dry some of this material inherently is, Desai makes a stylistic decision that might be troubling to some readers of historical writing: she includes novelistic flourishes in her descriptions of meetings and conversations. A businessman speaks with Rai while “slowly twirling the heavy silver paperweight, crafted in Sheffield, on his desk”; when Devika and Himanshu consummate their relationship, her saree, tightly wound at first, “lay unspooled on the floor”. One intriguing example of the book’s constant shifts between imaginative prose and fact-recounting is in a description of Devika reading a letter from Prithviraj Kapoor, introducing his son Raj. This fascinating 1943 document is reproduced on the opposite page, but the author also adds this: “She noticed that his handwriting was very reminiscent of Svetoslav’s. Did all handsome men write the same way, in this strong style with a sharp slant, she wondered idly.”

Of course, Desai’s reasons for doing it this way are understandable – it makes the book a more fluid read, the characters more immediate. And there are places where the conjecture works well: for instance, when Devika suppresses her feelings and supports Rai who has run into legal trouble with an ex-lover, Desai cleverly uses the line “she absorbed the story and got into character” to create the sense of a woman who must follow a script even in real life.

A reader’s response to the extrapolations is a matter of individual taste, but few film buffs will argue with the value of The Longest Kiss as documentation. Or how poignant it is to be drawn back into an era when a silent Indian film like Prem Sanyas/The Light of Asia had a special screening at Windsor Castle – and when a woman in a managerial position helped shape the careers of future legends like Dilip Kumar and Raj Kapoor.

Posted by Jabberwock at 8:09 AM