For this nostalgia piece for Mint Lounge, I revisited a few old episodes of the Doordarshan TV show Wagle ki Duniya… and watched a bit of the new, shinier Wagle reboot currently showing on Sony Liv.
(Of course, I then got sucked into a time warp and ended up watching a few episodes of Jaspal Bhatti’s Flop Show as well. But that’s for another time.)
------------

“Before the time of mobiles, internet and social media, everything moved at its own sweet pace,” goes the opening voiceover of the acclaimed web series Scam 1992. In its first scene, a man enters a newspaper office with an important scoop. Seeing an elderly gent who looks like a senior editor, he offers to give him the breaking news. “No, no,” says the old man, who turns out to be the legendary cartoonist RK Laxman, determinedly modest even though the whole office is in awe of him, “I am just a common man, you see.” It is a witty beginning to a show about the rise and fall of stockbroker Harshad Mehta, who started off as a “common man” too, but finished his career and life in very uncommon circumstances. 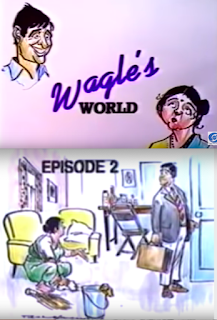 A few years before the Mehta scam unravelled, an RK Laxman-scripted TV show featuring another – much less ambitious – common man was staple viewing on Doordarshan: Wagle ki Duniya was about the sweet little middle-class world of Srinivas Wagle (played by Anjan Srivastava) and his sometimes-exasperated wife Radhika (Bharati Achrekar). Director Kundan Shah, who helmed many of the early episodes, told me once about the experience of working with Laxman on the show. “He was one tough nut – like a snake, always ready to strike with hard-hitting humour, and cantankerous if the right idea for his daily comic didn’t come to him.”

It's easy to romanticise the past, to go on about the “golden age” of television in the 1980s, when the whole family watched TV together. (Strictly speaking, with just one channel, there was no choice; if you didn’t like your family you had to sit around waiting for the internet to be invented – or at least for satellite TV to arrive – so everyone could crawl into their separate bubbles.) Revisiting Wagle ki Duniya today, you won’t find much of the sharp-edged comedy that Kundan alluded to (or the caustic satire of his own film Jaane bhi do Yaaro). What you have instead is a quietly absorbing show, gentle but firm in its humour (like the Laxman daily strip), deriving most of its pleasures from the chemistry between the two very likable leads.

It was about everyday things that worried middle-class Indians. The stress that comes with buying a second-hand car or a TV set. Dealing tactfully with a new maid who has her own problems at home. Giving a bribe for the first time, and doing it nonchalantly. Running an office without an assistant. (Wagle works for a company called Ambica Suppliers, and he and his colleague Mr Bhalla help each other out with little chores apart from exchanging advice about daily matters.) Averting a crisis when a date is printed wrong on invitation cards for a residential-society music performance. (Today it would be a matter of seconds to get it corrected on the WhatsApp group.)

In this setting, high drama could reside in the quotidian: thus, rousing superhero music played in a scene where Wagle brought home a large plastic drum for water-storing (packed atop a taxi). When his neighbours learnt that his was the only house getting regular water supply, the soundtrack turned menacing and there were murmurs of “This is corruption.” There was Wagle’s own catchphrase “See the fun!” which could be used in any context, to express annoyance or amusement. And once in a while, there were traces of the zaniness you’d associate with Kundan Shah, as in a scene where a TV salesman recites a list of improbable Japanese brands (“Fujiyama! Kabuki! Haiku 11! Karate 13! Kobe 122!”) to the perplexity of the Wagle family.

We sometimes over-stress the differences between the soft-socialist “then” and the consumerist “now”, but shows like Wagle ki Duniya are reminders that there were fewer things competing for one’s attention back then. How strange it is, with our experience of smart-phone multi-tasking, to see an office-goer feeling harried when the phone on his desk rings as he is heading out to post a letter. Or to hear Wagle worry about his children’s posture when they watch TV. Or to see Mr Bhalla, brows furrowed, tapping away at a small rectangular object in his hand – and to realise, after a few disoriented seconds, that he is holding nothing more lethal than a pocket calculator. 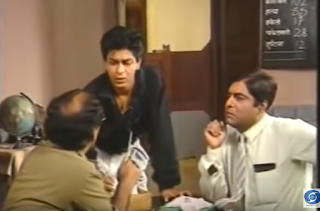 In the scattered moments where Wagle ki Duniya departed from its trademark laidback tone, it was only to reaffirm the “slow and steady” rule. Take the police-station episode in which Shah Rukh Khan, years before movie stardom, plays a youngster who scrapes against Wagle with his car. The YouTube video has comments about SRK’s “over-acting”, but his nervous energy, the swagger and the whines of “Come on, old man!” provide an enjoyable contrast to the show’s overall zeitgeist. Something similar occurs during another episode with Salim Ghouse as a smooth-talking job applicant whose behaviour is seen as rude and inappropriate. The scene builds up to one of Wagle’s funnier lines, delivered by Srivastava in his trademark preoccupied, deadpan style. “Waise woh bura nahin tha,” he tells Radhika (“He wasn’t bad”), and then quickly corrects himself: “Bura tha. But he was qualified.” It is “bura” to be anything more than quietly diligent and self-effacing. But with economic liberalisation just around the corner, one might say these impatient youngsters are trying to drag Wagle into a faster-paced world. 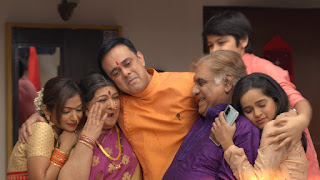 Which brings us to Wagle ki Duniya: Nayi Peedhi Naye Kisse, in which Srivastava and Achrekar reprise their roles, this time as supporting characters, while the focus shifts to their son Rajesh, his wife Vandana and their children. One might initially be cynical about this sequel-cum-rebooting: its bright saturated colours are worlds removed from the reassuringly dull palettes of 1980s Doordarshan, and the devotional opening scene – with a well-scrubbed family praying and looking gooey-eyed – set off alarm bells for this viewer, suggesting the onset of a standard-issue soap opera that promotes sanskaari “values”.

And yet, if you settle in and watch enough episodes (I watched five), you may find that despite the patches of sentimentality – of the sort that one didn’t associate with the first Wagle ki Duniya, Laxman or Kundan Shah – and at least one grating character, a doggerel-spouting society secretary, the new show replicates something of the good-natured charm of the original.

This is partly because the interactions between the next-generation couple (pleasantly played by Sumeet Raghvan and Pariva Pranati) feel natural and lived-in. But also because there are enough reminders that some middle-class problems, challenges and sensibilities don’t go away – notwithstanding the cosmetic changes in Indian society over the past two decades, or the manicured glossiness of the show’s set design. In one episode where Rajesh and family make a very rare outing to a “posh” restaurant and end up with a bill no one anticipated – leading to imagined panic about having to wash plates (“veg and non-veg dishes!”) – both their embarrassment and the small waves of humour around it feel authentic and relatable.

The original Wagle couple, in their first scene, appear on a video call, which immediately sets up a contrast from the old days. But it is also made clear that there isn’t such a big difference between ancient voice recordings on a dusty audio cassette and a family video being recorded on a modern phone; the technology has changed, the texture of the nostalgia is the same. When Rajesh speaks about the sacrifices his parents made for him, it harks back directly to scenes from the 1980s show, such as Wagle going out of his way to entertain his kids with a picnic outing.

“Dadar ki aapki saari purani cheezon ko use kar ke yeh naya mahaul banaaya hai humne (We have used all the things from your old flat to create a new environment),” Rajesh tells his parents after moving them to his building – for instance, he has turned their ancient box TV into a retro-table for the new flat-screen TV. It’s a goofy but oddly moving scene about taking the old and the outdated and situating it in a new context. This is also what the new Wagle ki Duniya is trying to do with our memories of the older show, and with Srivastava and Achrekar around, it may well work. So what if Senior Wagle has turned into a version of the uncle who fumblingly sends motivational messages on WhatsApp at 5 AM? The essence of the man remains, and in his hesitant efforts to make sense of a new duniya you can still “see the fun”. 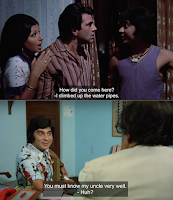 P.S. Watching a couple of episodes for this piece, I wondered about the actor playing Wagle’s colleague Mr Bhalla. There was something about his voice and gestures that seemed familiar, but I couldn’t place him until I looked him up: his name is Harish Magon, and a decade before Wagle ki Duniya he appeared in small but very memorable roles in two of Hrishikesh Mukherjee’s best-loved films. In one of Chupke Chupke’s funniest scenes, he is the thief who disturbs Dharmendra and Sharmila Tagore; and in Gol Maal, he is the cocky job applicant who unwisely tries to impress Utpal Dutt by giving his uncle’s reference and talking about his fondness for sports (Black Pearl!).

One Wagle ki Duniya episode, in which Wagle and Bhalla try to hire an office assistant, has Harish Magon in a nice inversion of his Gol Maal role – as an interviewer who isn’t impressed by the posturing of an over-smart youngster. Wonder if it might partly have been an inside joke (though I can’t picture RK Laxman referencing Gol Maal in a Wagle script).
Posted by Jabberwock at 3:23 PM