On Shadow Craft, a book about the aesthetics of black-and-white Hindi cinema

For anyone who loves black-and-white cinema – and also likes the idea of a creative work being encountered in its original form rather than disfigured to meet contemporary tastes – the computer-colourisation of old films is cause for teeth-gnashing. Almost equally bad is the current trend, on Instagram and elsewhere, of colourising old photos, such as publicity shots or candid stills of 1940s and 1950s movie stars – and doing this garishly, with little respect for the integrity of the original. 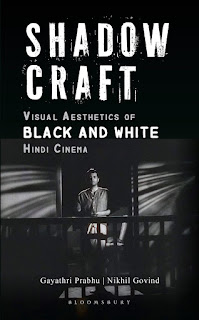 The idea that black-and-white cinema had its own visual grammar, that it wasn’t just a case of creativity being constrained by technology, remains surprisingly hard to grasp for many of today’s film students (this reviewer once had a teaching experience involving a student who said black-and-white images in old films literally made his eyes hurt). At purely a conceptual level, then, Gayathri Prabhu and Nikhil Govind’s visual study of some key Hindi films made between 1948 and 1963 is a very welcome project. Happily, Shadow Craft turns out to be more than just a worthy idea: this is an invigorating cinema book that is serious and detailed without being dense or inaccessible. Assuming, of course, that the reader has an appetite for intense subtextual analysis.

As the authors put it in their Introduction, the period they cover involves films that were watched by "the last generation that would not ‘see’ black and white as an absence of colour but as an assertive elaborate palette of textures, of intricate filigrees of dappled light, of deep tones of shadows, a complex vehicle to capture human interiorities and frailties at their nuanced best". Having made this strong claim for black and white filmmaking, they set out to justify it by closely examining specific sequences. After starting with Kamal Amrohi’s Mahal (1949) – billed as Hindi cinema’s first major ghost story – they turn to the three filmmakers who are generally regarded the most important Hindi-film auteurs of the 1950s: Raj Kapoor, Bimal Roy and Guru Dutt.

Major works such as Dutt’s Pyaasa and Kaagaz ke Phool, Roy’s Bandini and Sujata, and Abrar Alvi’s Sahib Bibi aur Ghulam are discussed, but so are lower-profile films such as the 1955 Seema (a Nutan-starrer that prefigured her acclaimed roles with Bimal Roy and offered a pointer to how a more skilled director might use her distinct screen presence). Even when it comes to the big names, some of the choices made are pleasingly atypical. For instance, it would be easy to discuss the many striking scenes in a well-known film like Awaara (1951), such as the elaborate dream sequence used to represent the protagonist’s desires and fears. Instead, the authors go back a few years to look at Raj Kapoor’s first directorial venture, the less polished, less-seen Aag (1948), for hints of thematic and formal signatures to come.

Along the way, there are insights about framing, camera placement and movement, the use of foreground and background in set design – and as the book’s title (as well as its powerful cover image from Sahib Bibi aur Ghulam) suggests, much discussion of the interplay of light and shadow. This is particularly relevant in the context of black-and-white Indian cinema because, for a long time after colour became the norm, Hindi films were content to forego visual nuance; most directors lit every corner of the frame to make a film as bright and colour-drenched as possible.

Of course, no serious discussion of a film’s aesthetics can be about the use of light and shadow in isolation; when watching a well-constructed film, one finds form and content working in conjunction, many elements coming together in barely perceptible ways to create the entirety of a scene. Accordingly, the insights provided by this book  are many and varied. Discussing the opening sequence of Mahal, for example, the authors describe the shot where a gardener pulls at a chain to lift a chandelier to the ceiling and the camera simultaneously tracks in to show the face of the protagonist (played by Ashok Kumar) for the first time. The moment represents a familiar trope of Hindi cinema, the stylised reveal of a star-actor; but in this case, given what has come before in the sequence, it also marks “an obscuration between the corporeal and the shadowy, the living and the dead”. 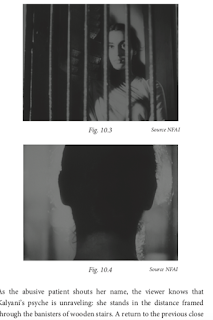 Similarly, the Aag chapter dwells on the many meanings of the film’s title (“the fire that sanctifies marriage is also the fire that irredeemably singes”), Raj Kapoor’s use of a theatre’s proscenium as “a mystery space full of unsuspected and obscure aural depths”, the tension between stage and cinema that may be found in this first film, and the foreshadowing of elements in later works like Mera Naam Joker and Satyam Shivam Sundaram. The Nutan-Bimal Roy chapter analyses pivotal visual moments such as the rain scene in Sujata where the protagonist contemplates suicide, and the scene in Bandini where she is driven to murder; but also discusses in more general terms how Nutan “performs with her entire body” and expresses rage, and how Roy “restores the actor’s centrality by keeping the props to a minimum, both in terms of the horizontality of the frame as well as its depth”.

Finally, the segment of the book that can be seen as centred on Guru Dutt (Abrar Alvi, the director of Sahib Bibi aur Ghulam, acknowledged that Dutt had helmed the film’s song sequences) examines cinematographer VK Murthy’s use of very low light readings for Pyaasa and Kaagaz ke Phool (“this technical choice explains several frames in both the films that feel like they have barely enough light for the human eye to see and for the silver nitrates on the frame to register”), the notable use of dissolves in Sahib Bibi aur Ghulam, and the subtlety with which a song sequence – where Bhoothnath (Dutt) hears Choti Bahu (Meena Kumari) singing from a distance – “turns aurality into a visual semiotic”. 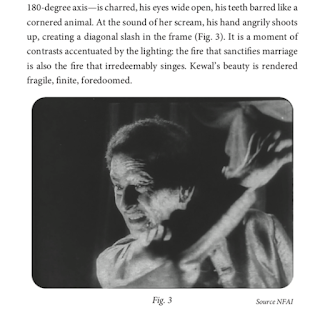 The analyses are complemented by still images from the sequences in question – and the story of how the authors acquired these images from the original prints sourced through the National Film Archive of India (NFAI) is related by Prabhu in a poignant “Outro”. However, Prabhu and Govind are also upfront about the “deception involved in reducing movement to stillness” – that is, the limitations of a printed book in conveying the special impact of watching a live film unfold before your eyes.

Which is a reminder, for potential readers, that any meaningful engagement with this book must entail experiencing the films too. This can mean extra effort, but the results should be rewarding for any cinephile. This reviewer found himself a little lost reading the first few paragraphs of the Mahal analysis, for instance, but things changed completely after an online viewing of the opening sequence. So it is for the rest of the films, and the journey should be enlightening even for those who think they know a particular classic inside out.

When one talks about watching old films with any seriousness or attention to detail, the question inevitably arises: how to watch these films, in what condition, what prints? In the aforementioned Outro, Prabhu mulls the importance of preserving original prints, seeing frames the way they were meant to be seen (“watching the 35 mm film, I found that the eye travelled on the image differently and one revelled in the elegance of the 4:3 dimension, rather than the more prevalent widescreen ratio of 2.35:1”), and frets about a fungus-affected reel of Sahib Bibi aur Ghulam, which may or may not be salvaged. This reminder of the fragility of old films underlies the whole book, and is echoed in the poignant story about VK Murthy, master of shadows, saying after Guru Dutt’s death, “I did not cry for him. I cried for myself.”