50 years of Anand: a tribute 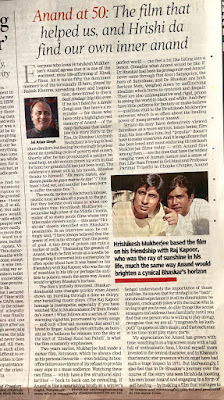 (Wrote a short tribute to Hrishikesh Mukherjee's Anand on its 50th anniversary, for the Sunday Times of India. My appreciation for the film has deepened over the years -- I didn’t gush about it when I wrote the book -- and I think it’s easier to see now why so many people think of it as Hrishi-da's definitive work.
Here’s the piece, in case the text in the image isn't clear)

Everyone who loves Hrishikesh Mukherjee’s Anand agrees that it is one of the warmest, most life-affirming of Hindi films. As it turns fifty, the dominant memory is of the terminally ill hero, played by Rajesh Khanna, spreading cheer and inspiration, determined to live a badi zindagi (big life) even if he isn’t fated for a lambi (long) one.

But here’s a reminder – for those who have only a highlights-reel memory of Anand – of the deep darkness that underlies this story. Early in the film, Dr Bhaskar (Amitabh Bachchan) is trying to heal slum-dwellers but feeling increasingly hopeless about an unending cycle of poverty and misery. Shortly after he has pronounced a patient beyond help, an old woman comes up with mithaai for him; her grandchild has just been born. The celebratory sweet still in his mouth, Bhaskar thinks to himself: “Ek mara nahin, aur doosra paida ho gaya marne ke liye!” (“One hasn’t died yet, and another has been born to suffer the same fate.”)

The words, spoken in Bachchan’s intense, caustic tone, are startling, almost a punch to the gut. But they become even more so when one considers this: Hrishikesh Mukherjee – avuncular high priest of the Middle Cinema, maker of so many gentle films whose very titles make viewers smile – this same “Hrishi-da” closely identified with Bhaskar’s pessimism. In an interview once, he cuttingly said, “I have always believed that the power of evil is far stronger than the power of good. A tiny drop of poison can ruin a bucket of milk.” Discussing the genesis of Anand, which he first wrote as a novella before getting it converted into a screenplay, he often spoke about how it was based on his friendship with Raj Kapoor, who was the ray of sunshine in his life (or perhaps the antidote to poison), much the same way Anand would brighten Bhaskar’s horizon.

The film’s initially downbeat, Bhaskar-dominated tone changes quickly when Anand shows up, bursting through a door as chirpy, star-heralding music plays. (The Raj Kapoor homage is inescapable, especially if you have watched “Kisi ki Muskurahaton Pe” from Hrishi-da’s Anari.) What follows are a series of heart-warming vignettes, punctuated by lovely songs – and only a few sad moments that aren’t allowed to linger. Anand’s own attitude, as buoyant as the balloons he releases into the sky at the start of “Zindagi Kaisi hai Paheli”, is what the film constantly emphasizes.

Two years earlier, Mukherjee had made a darker film, Satyakam, which he always cited as his personal favourite – even holding its box-office failure as evidence of its refusal to provide easy sops to a mass audience. Watching these two films – which have a few structural similarities – back to back can be revealing. If Anand is like nourishing broth on a winter’s night, Satyakam – about an uncompromising man who is repeatedly disappointed by an imperfect world – can feel a bit like biting into a lemon. (Imagine what Anand would be like if Dr Bhaskar had been its protagonist and Anand never came through that door.)

Satyapriya, the hero of Satyakam, and Dr Bhaskar are both Serious Men, weighed down by unflinching idealism which turns to cynicism and despair. They are also unimaginative and rigid, prone to seeing the world in black and white. And they have little patience for fantasy or make-believe – qualities that were vital to the Hrishikesh Mukherjee universe, which is so often about the healing power of masquerade or naatak.

Hrishi-da may have defensively viewed Satyakam as a more serious, hence better, film than his box-office hits, but “popular” doesn’t have to mean unserious. And it is significant that the best-loved and most enduring Hrishikesh Mukherjee films today – with Anand first among them – are the ones that have the widest ranging view of human nature and a sense of fun. Like Ram Prasad in Gol Maal and Professor Parimal Tripathi in Chupke Chupke, Anand Sehgal understands the importance of those qualities. He knows that for zindagi to be “badi”, one should experience it in all its dimensions: be flippant, crack goofy jokes with the nurse who is trying to get you to rest, do silly things like accost strangers and address them familiarly (until you find that one person who is willing to play along); recognise that we are all “rangmanch ke kathputli” (puppets on life’s stage), and that each man in his time must play many parts.

My appreciation for Anand has grown with time: watching it on a big screen once with a hall full of enthusiastic fans, I found myself more invested in the central character, and in Khanna’s charismatic star presence which must have had such a huge impact in 1971. But increasingly, I also feel that in Dr Bhaskar’s journey over the course of the story one sees Hrishi-da locating his own inner Anand and engaging in a form of self-healing – by making a film that manages to be breezy and meaningful, playful and profound at the same time.