'Morality' in horror: how I learnt to stop worrying and love the sanskaari, chainsaw-wielding monster

Uday Bhatia wolfishly asked me to write a horror-related essay as an adjunct to this week’s Mint Lounge cover by Rituparna Sengupta. It was a tight deadline (plus I watched Bhediya in between, liked it a lot, and got confused about whether I should include one of the many talking points around that film) – but eventually I wrote something about one of horror’s pet themes, the often passive-aggressive dance between tradition and modernity. (Also touched on this in my Intro for Shamya Dasgupta’s Ramsay Brothers book.) And how the genre messes with the moral impulse. Here is the piece.
-------------------------------------------

Mini-horror films – or terrifying moments worthy of a good horror film – can reside within movies that are not, strictly speaking, from the genre. Consider a chilling sequence from the 2019 Malayalam thriller Ishq, about young lovebirds who run afoul of two men posing as policemen. The scene begins with Vasudha (Ann Sheetal) and Sachi (Shane Nigam) in an intensely romantic moment at the back of a car. Both are shy, uncertain, but also eager; he takes the initiative and asks her to kiss him on the cheek – it is the first time they are getting even this physical. 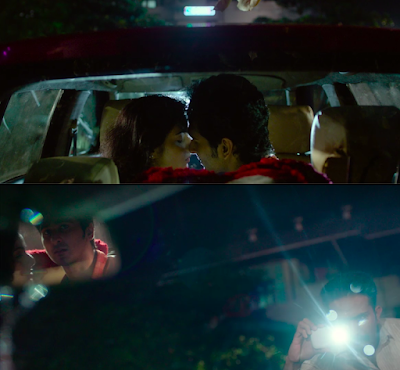 After some hesitation she complies, then asks that they sit together for a while before driving back. The air is thick with unarticulated desire, their lips draw close… and the blinding, invasive light bursts in on them (and on us, since the camera is right behind the lovers). A private space becomes a public one; what follows is creepy and claustrophobic, though there isn’t an actual physical assault.

The scene reminded me of a comparable situation in a very different type of movie – the raunchy Hollywood teen-slashers of the 1970s and 80s, which for many urban Indian kids of my age were introductions to the horror genre at its most base and accessible. This horror – as experienced on creaking video-cassettes – was inextricably linked with sex; it was often our best hope of seeing onscreen nudity without being closely monitored by parents. Here is Halloween with its artful opening sequence through the POV of a child wearing a pumpkin mask, culminating in the murder of a big sister who has been “naughty” with her boyfriend. Here are the Evil Dead and the Friday the 13th franchises, wherein horny teens make out in the woods before being dissected by knife or chainsaw.

For many of us – young boys, at least – the homicidal monster in these movies was bad only because he ended this glorious vision of heaving nude bodies. Other viewers, from an older generation, might agree. One of my favourite writers, Danny Peary, described the traumatic experience of being an adolescent in 1960, watching the shower murder in Hitchcock’s Psycho with no clue about what was to come: it felt like the naked woman was being punished for allowing all these male viewers to look at her, Peary said; the killer’s knife was aimed as much at the lascivious audience. (“I believe one reason we were so terrorised is that we related it to our own mother bursting through an unlocked door and ripping apart a dirty magazine she caught us with.”)

In the Indian 1980s, there were the cheaply made B and C films such as the work of the Ramsay Brothers: skimpily dressed youngsters –unmarried! Of both sexes! – went off together in an imported red convertible but arrived at a very Indian haveli, only to be nastily surprised while showering in swimsuits or wriggling beneath bedsheets. Much later the Pakistani film Zibahkhana (2007) would offer a self-aware look at how such tropes play out in a milieu where teenagers merely doing drugs together could invite hellfire. (“Jahunnum mein jaa rahe ho, mere bachchon!” yells an old man as the young reprobates prance off together. Soon enough, a burqa-clad psychopath arrives.)

Ishq is a more refined and sensitive film, more about critiquing the male gaze than indulging it (this remains true in the second half, when the nominal good guy sets out to take revenge and becomes a monster himself). But the effect of its predatory scenes – as in all the above films – hinges on the fear of being watched, or burst in upon, during a very vulnerable moment. And from a strictly conservative point of view, the predator in all these cases is simply being moral – or “moral” in quote marks, if you prefer.

Throughout horror-movie history, there have been many manifestations of this “moral” monster. The surgeon in the French classic Eyes Without a Face is a loving father who wants the best new face for his disfigured girl. The busboy in Roger Corman’s A Bucket of Blood yearns to be an acclaimed artist (and perhaps this means making clay statues with real people underneath). Leatherface and his family in The Texas Chainsaw Massacre are social outcastes who need to eat (and they sit together at the table like a good sanskaari clan). Mrs Bates doesn’t want her boy despoiled by city women. Looked at in the proper way, these are all reasonable justifications for murder. 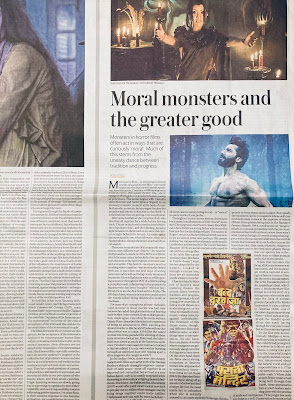 Closely related to this is one of horror’s most enduring themes: the uneasy dance between tradition and progress, past and present, old and young; how an archaic or fading world threatens a modernizing one, or vice versa; how family or community values come up against individuality. The treatment of this theme varies, though, and different films pick different sides, or leave things open to interpretation. On one hand, there are plenty of stories where youngsters are gratuitously slaughtered for defying social strictures. On the other hand, there are films about strong, outspoken or desirous women who are presented in sympathetic terms – from Irena in Cat People (1942), the disturbed heroine trying to shrug off an ancestral shadow and lead a happy life (but the beast inside her is unleashed when she is sexually aroused) to, in a more explicitly Woke age, the protagonists of recent Hindi films: such as Phobia (2016) in which a once-free-living artist is confined to an apartment, made dependent, because of a psychological trauma; Aatma (2013), in which a man exercises supernatural power over his glamorous ex-wife because he can’t control her in the usual ways; or Ek thi Daayan (2013), in which another man struggles with a romantic relationship, because who can say when a woman might turn into a witch?

So the monsters can be conservative moral policers who would take away the agency of young people or keep status quos in place. But equally, the monsters can be youngsters whose self-centred hedonism comes at the expense of others. (When those philandering kids in the Ramsays’ Purana Mandir condescend on “junglee” tribals, you almost sympathise with the pre-modern demon Samri who arrives to show them what’s what.) And in this light it’s worth noting what happens when the parameters shift from the terrible things that humans do to each other (across the lines of gender, class, caste, ethnicity, religion or what have you) to the even more ghastly things that our species has collectively done to other animals and to the environment.

When that becomes the focus, all of us are in some way implicated, and this unpleasant truth is captured in ecological horror/creature films like the recent Aavasavyuham: The Arbit Documentation of An Amphibian Hunt, which uses a mockumentary-like format to tell the story of a strange man who enters and exits the lives of various groups of people in the Kerala backwaters. It is also a subtext in Tumbbad (2018) – one of our most elegant supernatural films – which uses as an epigraph the Gandhi quote about the earth having enough for everyone’s need but not for everyone’s greed.

In the fine new horror-comedy Bhediya – a werewolf story that is mindful of the unfairly bad press given to wolves in folklore and fables – a young man goes into the Arunachal jungles for a profit-minded corporation, unconcerned about the natural world and our responsibilities to it. (“The only hariyali I know is hara patta – cash.”) When older people firmly resist a road being built through their forest, these mercenaries turn to youth leaders, seducing them with the promise of malls and multiplexes. (“The jungle has made you frogs in a well. Conservation ke naam pe kab tak junglee bane rahoge?”)

But then the protagonist gets in touch with his inner wolf, gets a guided tour through the wild, and starts to appreciate its importance. The lines between good/bad tradition and good/bad modernity are blurred, as is the very meaning of “progress”. And the bhediya becomes the best kind of moral monster, chomping on a few people now and again, but always with an eye on the greater good.

Posted by Jabberwock at 8:57 AM