A classroom tryst with nepotism: on the obscure origins of Princess Leia

Whatever your views on nepotism in cinema, it can make things a lot easier for a film teacher trying to provide points of identification to young students. During a panel discussion on Satyajit Ray at Jindal University a few weeks ago, we oldies were chattering familiarly about Sharmila Tagore, with full confidence that everyone in the audience would know who she was – then I noticed the students looking blank or confused, and briefly considered interrupting my fellow panellist and yelling out “We are talking about Sara Ali Khan’s grandmother!” (Something similar could have been done with Jaya Bhaduri – whose name also came up – as Navya Nanda’s nani.) 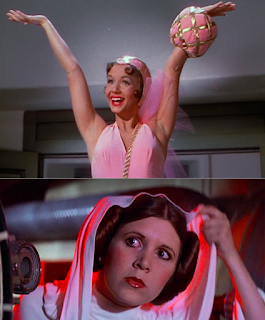 And then there are serendipitous moments like the one I experienced while showing a short clip from Singin in the Rain in class a few weeks ago. The scene in question was mainly to illustrate a point about the difficult transition from silent films to “talkies”, but as I ended the clip it happened to pause at the exact moment where Debbie Reynolds makes an appearance, jumping out of a cake at a party.

Hit by sudden inspiration, I asked if any of the students knew the Star Wars films. Yes, came the response from many of them. You know Princess Leia? I asked (briefly nervous that they would only know Star Wars through recent fan fiction, and nothing at all about the original films). Yes of course, they said. “Well,” I said, feeling like a magician pulling a rabbit out of a hat, or a Jabba out of a Hutt (or a Debbie out of a cake), “Princess Leia was played by an actress named Carrie Fisher, and this young woman you see here was her mother – in real life, I mean.”

Interested murmurs filled the classroom, but in this moment of triumph I went and overreached. Remembering who had played Leia’s mother in the Star Wars prequels, I said “Does she look anything like Natalie Portman to you?” Blank stares. They had probably watched the original Star Wars because their parents had made them, but they were too young to know who Natalie Portman was…