The boy stood on a sinking island: about Anees Salim's The Bellboy 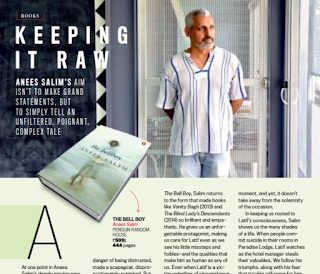 I loved Anees Salim’s latest novel The Bellboy, and rank it with earlier favourites such as Vanity Bagh, Tales from a Vending Machine and The Small-Town Sea. Here is another demonstration of how Salim can bring so much life and vigour – and, yes, joy – to a story that, in a broader sense, is arcing towards tragedy and decay. (This was also particularly true of The Blind Lady’s Descendants, a book-length suicide letter that somehow managed to be uplifting and even affirmative.)
Wrote this short review of The Bellboy for India Today…

At one point in Anees Salim’s deeply moving new novel, the protagonist Latif – a young island boy working at a lodge on the mainland – mulls a newspaper headline he had read earlier. “Saffron Sweeps Nation” was the headline, but since Latif, with his very limited English, can’t be sure, he rearranges the words in his head as he tries to fall asleep. Was it “Nation Saffron Sweeps”? “Nation Sweeps Saffron”? Much later, when the words reappear at a crucial moment in his life, he will still be unable to understand their import.

In the hands of many writers, this political headline – and its appearance in Latif’s story – might be used in a straightforward way to underline the plight of the lower-class Indian Muslim: in danger of being hounded, distrusted, made a scapegoat, or disproportionately punished. But Salim is such a fine storyteller, so good at immersing us in his characters’ worlds, he seems incapable of being pedantic in that way. The beauty of the final, shattering passages of The Bellboy (including a menacing conversation between Latif and a policeman) lies in the fact that while this *can* be read as a story about the vulnerability of minorities, stranded on a fast-sinking island, it doesn’t have to be read that way; either way, it retains its power as a specific tale about a specific person.

Anyone who has experienced Salim’s work over the past decade will know this quality. As a long-time fan, I felt his last novel The Odd Book of Baby Names was a little less effective than his best work, mainly because it moved between the stories of a dozen characters, so we never got much time with a single one of them. With The Bellboy, Salim returns to the form that made earlier novels like Vanity Bagh and Tales from a Vending Machine so brilliant and empathetic. He gives us a single unforgettable protagonist, makes us care for Latif even as we see his little missteps and foibles – or rather, the qualities that make him as human as any of us. Even when Latif is a victim – of poverty, of circumstance, possibly of bigotry – he is so many other things. He is the boy who, in one marvelous tragic-comic passage, finds himself in the blasphemous position of reading surahs from the Quran for a just-deceased uncle while aware that he is still wearing a condom under his trousers. It’s a laugh-out-loud moment, yet it doesn’t take away from the solemnity of the occasion – and there are countless passages like this across Salim’s body of work. (I think about Hasina reflexively shouting “Allahu Akbar” right back at a “terrorist” during an airport drill in Tales From a Vending Machine.)

In keeping us rooted to Latif’s consciousness, Salim gives us – as he so often has in the past, particularly with characters like Hasina, Imran and Amar – the many shades and layers of a life. When people commit suicide in their rooms in Paradise Lodge, where Latif works, he watches as the hotel manager tucks away their valuables before calling the police. Witnessing an awkward moment involving a woman, her lover and the doleful husband who has been cuckolded – and surprised by how quickly matters are hushed up, even with the police involved – he wonders if the two men had shaken hands at the end, or exchanged shirts the way footballers did.

We follow his little triumphs, along with his fear that trouble will come for him precisely at a moment of glory, his attempt to be a saviour when a boat carrying a group of convent girls stalls, his crippling sadness about the death of his father, his concern for his mother and sisters, and for the island that has been declared doomed by visiting ecologists, his creation of an alter-ego named Ibru, when he tells stories to a sympathetic co-worker. There is no idealising – instead there is a portrait so truthful and multi-layered that it no longer seems useful to think of a person in such limiting terms as “good” or “bad”, “happy” or “unhappy”, “ours” or “theirs”. This makes Salim’s work more capacious than many novels with grander canvases can be, and The Bellboy is a worthy addition to his oeuvre.

Posted by Jabberwock at 2:47 PM