(Wrote this review of a new series for Money Control. P.S. a Juhi Chawla-starrer called Hush Hush and a Sunny Deol-starrer called Chup released on the same day?! This gave me a major nostalgic flashback to watching Sultanat in a hall in 1986)
-------------------

During episode two of the new thriller series Hush Hush, there was a point where I felt like the show was starting to come together. Near the end of the first episode, we had seen Ishi (Juhi Chawla), a powerful and controversial lobbyist, in an altercation with an unknown man – and the chain of events that led to her three closest friends Saiba (Soha Ali Khan), Zaira (Shahana Goswami) and Dolly (Kritika Kamra) becoming caught up in this situation. Now, just a few minutes of screen time later, Ishi is found dead in her apartment – suicide or murder? – and the friends, grief-stricken, are trying to process the events of the previous night, how they have been implicated, and what options lie ahead for them. 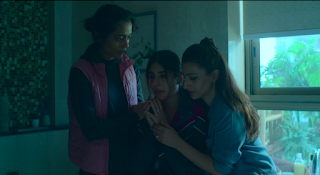 As the confusion and guilt mount, Saiba and Zaira are snapping at each other, while Dolly – the most traumatised of the group at this stage – is staring vacantly at her friends, feeling like a caged bird (a running theme for this character), unable to articulate her own thoughts. Meanwhile, in a separate thread, the cops led by Geeta (Karishma Tanna) arrive at the death scene for the investigation. All the principal characters – the five women who get star billing in the show’s opening credits – have now been introduced. There is a focused intensity in these scenes, in the anxiety of the interactions of Dolly, Saiba and Zaira, which comes together marvellously and is aided by sharp performances.

And it is such a pity that Hush Hush never finds this focus and rigour again. As the show progresses it continues to be engaging in a way that almost any moderately well-put-together crime series can be if you have enough time as a viewer (or if you *have* to see it for reviewing purposes): you keep watching, since there are minor cliff-hangers here and there, you have become invested in a couple of the characters, you like the actors… and most of all you’re hoping, even as your gut instinct tells you no, that the narrative and the pace will somehow get better. But Hush Hush lets itself become diffused and loosely structured. And this despite having done a reasonable job of setting up its premise and giving us basic information about the lives and challenges of its high-society protagonists (for instance, Zaira is managing the many stresses and deadlines that come with running a fashion label that has gone international; Dolly learns that her ovulation cycle is being tracked by her persistent mother-in-law who wants a grandchild to carry on the family legacy; Saiba is ostensibly in a more settled family unit, but there seem to be dormant tensions in her marriage, and a question mark about why she left her career as a journalist). 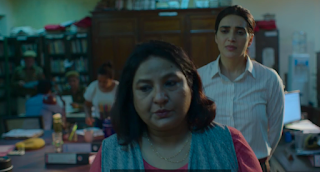 The other side of the class line is represented too, in the form of Geeta, and through some amusing asides in the screenplay. “Sir-ji, siyaappa ho gaya,” we are told a building security guard said after Ishi’s body was discovered in her plush apartment – it’s a direct, rustic, wide-eyed exclamation that seems worlds removed from the rarefied lives of the La Opulenza complex and its air-kissing residents. There is also some on-the-nose dialogue: a cop saying “Inn ameeron ke life ka ‘behind the scenes’ kuch aur hee hota hai”, another remarking “Inn ameer logon ke alag hee chochlay hote hain.” And a little lecture from Geeta’s mother, along the lines that rich and poor people may not be innately different from each other, but money changes everything.

An earlier, better series, Made in Heaven – which also started by seeming to be exclusively about the lives of rich socialites before turning into a more nuanced examination of class conflict – got much of its frisson from what we gradually learn about the protagonist Tara and her journey into wealth. One isn’t, of course, demanding that every show employs a similar structure or method, but given how much Hush Hush seems to invest in its principal characters (and how sincerely the main actors approach the material given to them) there are too many holes, and not enough providing of back-story. It would certainly have been useful to know a little more about how Ishi, Zaira, Saiba and Dolly came to become such a close-knit group of confidantes in the first place. (This is especially relevant because there are notable age differences between them; the show’s first scene, a flashback set in 1978, makes it clear that Ishi is now in her early fifties, while Zaira and Dolly must be at least a couple of decades younger.)

Conceptually and thematically, there is much of interest in Hush Hush, which begins with an allusion to Frances Hodgson Burnett’s novel The Secret Garden – about an orphaned girl undergoing a process of healing – and goes on to suggest that life-affirming secret gardens for lost children may be much harder to come by in the real world (or at least in the farmhouses of Gurugram). But the series becomes a slog in its execution, the kinetic energy of that second episode giving way to long ponderous encounters between characters where too much is said too slowly, with dialogue that doesn’t feel like it could have come from Juhi Chaturvedi (who has written some fine films in the past decade). In one embarrassingly poor family scene, Benjamin Gilani as a patriarch harps on about tradition while his son stands up to him with a “You keep your fucking money and you keep your fucking legacy”. Some seemingly important side-stories – such as Geeta’s romantic relationship with another young woman who is being pressured to get married – aren’t fleshed out or given the weight they need. 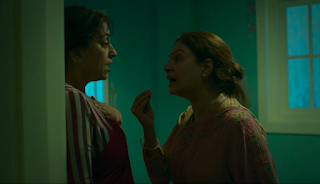 As the boy who had crushed on Juhi Chawla for a short while in the 1980s, it pains me to say this, but her droning dialogue delivery made me thankful that she had such a small part during the show’s midsection: though Ishi is central to the plot – the enigmatic figure whose past life is the key to the psychological mystery – she appears mainly in short flashbacks, setting up (inadequately realised) suspense about what led to her fate. She does get more substantial screen-time in the end-section, though, and a few scenes with Ayesha Jhulka (who plays Ishi’s childhood friend Meera) that can be mildly nostalgia-evoking if you’re in the right mood. For an 80s or 90s kid, there is some honest enjoyment to be had in watching Chawla and Jhulka, actresses from a very different era in Hindi cinema, speaking unselfconsciously melodramatic dialogue to each other. (“Main tumhein kaise chhod ke ja sakti hoon?” “Tum toh mujhe bahut pehle chhod ke chali gayi thi.”) At the same time, perhaps because we have become used to today’s OTT shows being grittier, more subdued, there is something anachronistic about these scenes – especially since Hush Hush’s uneven structuring means that the younger women are suddenly off screen for large patches of time.

All this notwithstanding, some sense of resolution or closure would have been welcome. But my overall disappointment with the series coalesced into a sinking feeling in its final moments when I realised that season 1 wasn’t attempting to be a stand-alone story: at the end threads are still untied, the bad guys are running free, there is a new death and the arrival of a new character, all of which provides the set-up for a presumed second season. I won’t be queuing up for that one.

Posted by Jabberwock at 2:25 PM