Relishing A Trip to the Moon on a big screen (also: A Page of Madness) 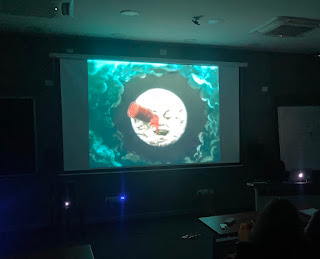 In my latest class at the OP Jindal University in Sonipat, I experienced the pleasure of showing a group of young students a sci-fi film that was made more than a hundred years before they were born, and hearing them say it was the most entertaining film they had watched all week. A Trip to the Moon, 1902, in a colorised version (available on Mubi India, and also here) that captures the spirit of Georges Melies’s hand-painted versions of the film when he first made it. And with a funky/punky score that might seem jarring at first, but again fits the mood and spirit of this film really well. 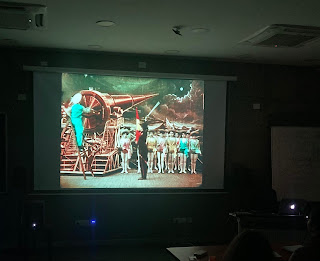 Crucially for me, it was the first time I was seeing this print on a biggish screen... it was quite the experience. (I also played the part of a Benshi for the students, standing at the back in the dark and providing them a bit of context here and there while the film was playing… hopefully without disrupting their enjoyment of it.)

And while on Benshi narration, another great silent film I watched recently was Teinosuke Kinugasa’s A Page of Madness, which is also on Mubi. This film was missing for decades, and rediscovered in 1970; there are scholars who believe film history might have been different if it had been widely available for study and analysis during those missing years. 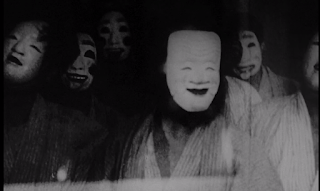 A Page of Madness doesn’t have any inter-titles/subtitles because when it was originally screened in 1926 there was a Benshi explaining aspects of the plot to the audience. This means that the plot can be hard to follow for an audience today (briefly: it involves an asylum janitor who is trying to help his incarcerated wife), but the plot is not so important here: what’s more important is how brilliantly the film uses lighting, close-ups, superimpositions and double exposure to create a sense of a claustrophobic world (and an equally claustrophobic inner world). It’s quite an experience.
You can also watch it on YouTube.

(I plan to host an online discussion around silent cinema sometime next week, will update soon.)

Posted by Jabberwock at 6:42 PM