Friendship and vendetta in 1984: on the new film Jogi

My chief memory of the anti-Sikh riots of 1984 is how distressed my grandfather – a proud man who had retired from the Army as a Brigadier a decade earlier – was when he had to blank out the “Singh” on the nameplate of our house in a posh South Delhi colony. That this was probably the worst thing to happen to my immediate family during those days means, of course, that we were very privileged compared to scores of other Sikhs who bore the brunt of the violence – and it was only years later, through news reports, literature (Ranjit Lal’s The Battle for No. 19, Jaspreet Singh’s Helium) and films (Shonali Bose’s Amu), that I began to process the full magnitude of what had happened. 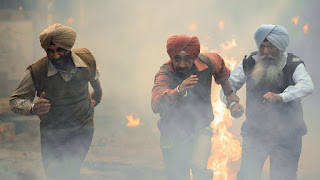 Ali Abbas Zafar’s new film Jogi, set in the immediate aftermath of Indira Gandhi’s assassination, is about the horrors visited on some of those less fortunate families. Jogi (played by the always-likable Diljeet Dosanjh) lives in east Delhi’s Trilokpuri. As a day that began like any other quickly turns surreal, he watches uncomprehendingly; before anyone can even understand what is going on, his brother-in-law has been burnt alive in his shop, and goons are coming for every Sikh they can find.

Many of these goons, we soon learn, are convicts who have been let out of prison by the local councillor Tejpal (Kumud Mishra), for the express purpose of collecting bounty. Rs 1,000 per dead Sikh. Or Rs 5,000 if the victim has a high profile. An infrastructure is in place for the slaughter: weapons, large quantities of diesel. Science teaches us that every action has an equal reaction, the councillor explains – words that echo Rajiv Gandhi’s famous line about the ground shaking when a big tree falls. 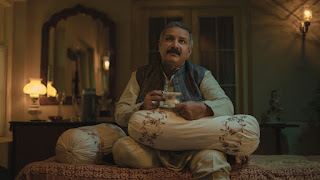 Shortly after Jogi and a few dozen others hide in a local gurudwara, his childhood friend Ravinder (Mohammed Zeeshan Ayyub), a cop defying Tejpal’s political orders, offers to transport Jogi and his family to safety in Punjab – an operation that wouldn’t be too difficult to pull off with just a small number of refugees. But Jogi insists that everyone else – close to a hundred people – must be taken along, and this becomes the film’s plot-mover, the engine that turns it into an action-adventure thriller about escaping a cauldron.

This is, it almost goes without saying, a very well-intentioned film, telling a story of horrific times with dignity and compassion – and also perhaps with an eye to making a larger, more universally applicable statement about the vulnerability of minorities in a country where the politics of bloodthirst and vengeance play out quickly (and where police can be given instructions to cooperate with the agenda of the moment). It is full of images that are clearly at the service of larger idealism: Sikhs being given shelter in a dargah, for instance, with food served to them by maulvis. (Jogi and Ravinder get essential help from another friend, a Muslim, who owns a truck company; so here are people from three faiths coming together to deal with communal hatred.)

There are issues at the execution level, though. Jogi firmly believes in spelling things out – no such thing as too much exposition – and protracting the emotional moment as much as it possibly can. Which can defeat the purpose in a race-against-time narrative like this. It’s understandable that there is much sentiment to be milked from a scene where Jogi tearfully cuts his hair in slow motion; but the languorous pace here and elsewhere belies the urgency of the situation. Responding to Jogi’s mother’s shock about the loss of his hair, a Sikh priest pedantically explains that he has made this big sacrifice to save them all, so it will bring him closer to God. This need to constantly underline is also manifest 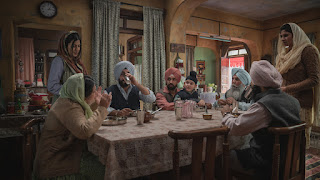 in the film’s Incessant Flashback Syndrome – too often, just a few minutes after we have seen something happen, we are given sepia images and dialogues from the same episode as a character recalls them: this is the sort of spoon-feeding that seems based on the assumption that viewers have such low attention spans now (perhaps they do, or perhaps they are constantly checking their phones while watching) that they need every dramatic moment regurgitated.

While there are a few hard-hitting images of riot violence, there is also some fairly basic visual shorthand – repeated aerial shots of Delhi with smoke plumes rising from one or two spots, for instance – and some old-fashioned storytelling: a widowed woman continuing to stitch a shirt for her husband (even though she knows he was killed) before embracing reality and breaking down; an altercation in a bus where Jogi and his father are improbably the only ones who don’t know yet about the assassination.

The performances are as sincere as everything else in the film, though Ayyub, a fine actor, has little to do beyond looking worried (and being understandably startled by Jogi’s explosions of anger towards him). The major acting chomps are divided between the antagonists: veteran Mishra (who just about succeeds in transcending the very stereotyped aspects of his role as the power-obsessed councillor using Sikh bodies as a stepping stone) and Hiten Tejwani as an enigmatic, stone-faced character named Lali who turns out to be very central to the plot, since he has an old score to settle with Jogi. 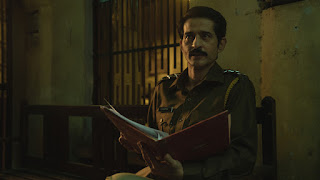 That score-settling is explained in a flashback sequence that comes late in the film and feels structurally very off – it involves the sudden, very belated introduction of an important person in Jogi’s life, and the hurried depiction of a life-changing episode. This also brings a strange, hard-to-define friction to the narrative. On one hand, this is a big-picture story about a major national tragedy and about a man who chooses to look out for his whole community rather than just his own family and loved ones; but on the other hand, as the full scope of the relationship between the protagonists becomes clearer in the final act, the line between personal and political is blurred; we see how events of the past define the actions of people in the present. Jogi sometimes moves uneasily between being a social commentary about one of modern India’s biggest tragedies and being an intimate thriller about private vendetta.