On Jaspreet Singh's Helium, fiction as lecture, and the 1984 riots

[Did a shorter version of this for GQ India]

Being all of seven when the anti-Sikh riots following Indira Gandhi’s assassination took place, I don’t have vivid memories of the time, apart from knowing that my grandfather had to remove the “Singh” nameplate from outside our south Delhi residence. That must have been distressing enough for a proud man who had retired as a Brigadier in the Seventies, but it doesn’t compare to the horrors visited on other, less privileged – or less lucky – members of the community during those lawless days. 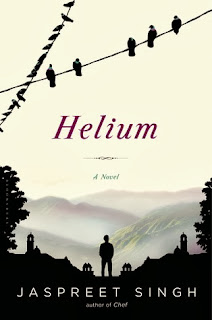 The writer Jaspreet Singh must have had a more immediate relationship with the tragedy: it is evident on nearly every angry, mournful page of his new novel Helium, written in the voice of a Hindu man returning to India after 25 years in the US. That quarter-century is a form of self-banishment: as a 19-year-old student in 1984, Raj witnessed the killing of his Sikh professor and later realised that his own father – a senior police officer – was complicit in the riots. But an even more complex guilt, rooted in Raj’s relationship with his professor’s attractive wife, may be at play. Now, decades later, he has returned to make sense of the past and possibly slay some of his demons. This is promising material for a novel, but Helium tries to be too many things at once, which could be a pitfall inherent in its genre.

When fiction takes on real-world tragedies – especially manmade tragedies that are still fresh in the collective memory – it often happens that the grotesqueness of actual events becomes overwhelming; reality threatens to dwarf the novelist’s imaginative skills. This may be why so much writing of this sort moves beyond realist storytelling and employs surrealism, magic realism or jet-black humour: consider Mohammed Hanif’s A Case Of Exploding Mangoes, a dark satire about the twilight days of the Pakistani dictator Zia ul Haq, or Mario Vargas Llosa’s The Feast of the Goat, about another real-life tyrant, the Dominican Republic’s Rafael Trujillo, or Raj Kamal Jha’s ambitious but overwritten Fireproof, which approaches the 2002 Gujarat riots tangentially, using the metaphor of a father saddled with a deformed baby on the day after the Godhra killings. By being deliberately over the top, such books often provide a buffer for the reader, shielding us from the full-on assaults of hard reality. But it goes without saying that such flourishes are inherently risky things – very few writers can pull them off with consistent success.

Helium makes some intriguing stylistic choices too. Singh – who has studied chemical engineering – is deeply influenced by The Periodic Table, Primo Levi’s memoir about working as a chemist in fascist Germany: that book is an acknowledged guiding light for him, as he contrasts the shape and movements of chemical elements with the colliding paths and destinies of human beings. But the spirit of another major writer also inhabits these pages. Like W G Sebald, Singh is interested in the variability and unreliability of memory, and collective forgetfulness when it comes to human tragedies; like Sebald, he uses the method of interspersing text with black-and-white images, which testify to the inadequacy of mere writing when it comes to remembering. (Unlike Sebald, he links rheology – the study of the flow of matter – with the viscosity of memories, a natural enough association given Raj's profession and educational background.)

Reading Helium, I was also reminded of Indra Sinha’s Animal’s People, a fictionalised account of the aftermath of the Bhopal gas tragedy. Sinha’s novel, which begins with the words “I used to be human once”, is narrated by a misshapen youngster called Jaanvar because he walks on all fours. One can note that Raj in Helium is another stunted narrator – stunted not physically, but emotionally – and the best passages here are the ones where we sense the fragility of his hold over past and present, his fear that paranoia and guilt may have unbalanced his perceptions. The writing often has a breathless, quivering vulnerability, as if Raj is using a rush of words to mask his own uncertainties; the narrative is swamped in excessive detail, often provided in parentheses (such as a note about Raj’s sleeping habits and the colour of the kurta-pyjamas he has just been given to wear), which can become annoying if you take it at face value, but works if you consider the fevered mental state of this man.

But stimulating as this book is on some levels, I was discomfited by its use of a fictional framework for purposes that seem better left to reportage. 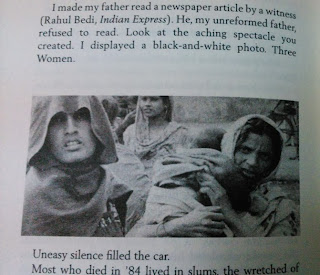 What good literary fiction in this genre can do is to show us, in abstract terms, how tragedies may occur through a confluence of character, circumstance and history. The emphasis is on uncovering poetic truths about people and situations, as distinct from investigative journalism, which is built on hard facts and explicitly sets out to name real names and ensure that justice is carried out. Helium blurs this distinction. It begins as a moving portrait of a man crippled by guilt (personal guilt as well as guilt by association – on behalf of his father, the hardliners in his community and ultimately even his country) but soon becomes a much more specific harangue against the Congress and the Nehru-Gandhi family. Using real people in a fictional narrative is not in itself a problem – Hanif’s novel, for instance, has brilliant comic passages such as the one where Zia ul Haq goes out into the streets in disguise at night – but Helium does this in a ham-fisted way that takes the reader right out of the story.

For instance, one important passage where Raj meets a Mr Gopal, an estranged friend of his father, who launches into a monologue about the political cover-up behind the riots, doesn’t read as something that flows organically from the narrative: instead the book grinds to a halt as Gopal Uncle lists the tyrannies of the Indira Gandhi government and the specifics of the riots, spits out phrases like “that failed aeronautical engineer Rajiv Gandhi (Mr Clean)...” and supplies pedantic commentary on the state of the nation in general (“We Indians call ourselves spiritual but we never give away a single rupee. We produce Tatas and Mittals and Ambanis and polyester princes and mining millionaires – while 500 million lead lives more impoverished than the most wretched in Africa”).

The point is not whether this is true (much of it is), or whether fictional characters should be allowed to express their own strident views (of course they should), but that Helium becomes less effective as a novel – as an exploration of Raj's interior life and his attempts at catharsis – at precisely the points where it makes these clumsy, long-winded detours into verisimilitude. It turns to documentation, narrating stories about real people such as the ministers Lalit Maken and H K L Bhagat (The same Congress leader, H K L Bhagat, who, according to witnesses, had ordered his men to kill thousands of Sikhs and rape the women, was now there in the camp distributing blankets and food […] I am unable to forget the face of that monster H K L Bhagat. Member of Parliament. Cabinet Minister. Ex-Mayor of Delhi), and introduces characters who aren’t so much properly realised people as obvious mouthpieces for the author. Watching this novel lose focus and direction is a lesson for writers attempting similar ventures, and a demonstration that well-intentioned lectures don’t usually leave much space for good storytelling.

P.S. I was unsurprised to read a laudatory international review that says:

The novel argues that such acts of violence were not spontaneous, not simply bloody revenge for the killing of Indira Gandhi by her Sikh bodyguards; the novel states that the killers were actively encouraged and orchestrated by well-known government officials and condoned by the police and authorities who, over a course of days, allowed mobs to maim and kill (blood for blood, the murderers cried).

This makes it sound like Helium is uncovering things that have not before been brought into public discourse, which is far from the case; but even so, are these adequate grounds for endorsement? The suggestion that this novel's worth lies in its “controversial” or "revealing" take on an important real-life tragedy amounts to elevating intention over execution, while neglecting the unevenness of its tone, the meandering floridity of its prose (“I sketch birds,” I lied. “What kind?” “The ones that live inside me. I need to draw every day. My daily exorcisms.” “You appear to be an intense man”) and, of course, the heavy-handedness of its pamphleteering.
Posted by Jabberwock at 7:38 AM