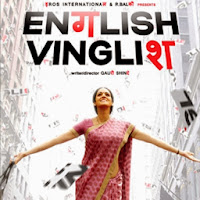 One of last year's most popular feel-good films was Gauri Shinde’s English Vinglish, with Sridevi as a diffident, middle-aged woman visiting America and barely knowing how to get by, given her limited knowledge of English. On arriving in New York, she is beset – both on the streets and in her sister’s house – by words spoken in incomprehensible accents, and generally disoriented by the pace of life around her. At one point the film’s music track expresses her state of mind through a melange of sounds coming at her from all directions; meanwhile the title song gently combines English with Hindi in ways that are familiar to most middle-class Indians. (“Badlaa nazaraa yun yun yun / Saara ka saara new new new.”)

I thought about the hegemony of language again recently while watching scenes in two very different films, scenes that showed how fluency or lack of fluency in a language can affect our perceptions of people: the powerful can seem like underdogs, good guys may appear ridiculous, bad guys almost admirable. The first was Mani Rathnam’s 1987 classic Nayakan, fuelled by Kamal Haasan’s stunning performance as Velu Nayakan, who becomes an underworld don and a godfather to the South Indian community in Bombay. I had a strange moment watching Nayakan: having become immersed in the story, and taken its “Tamil-ness” for granted (this was a clearly South Indian film, I had to read subtitles to understand it), I temporarily forgot that the setting was Bombay, and that people outside Velu’s immediate, enclosed environment speak in Hindi or Marathi.

This came home in a scene where Velu – already a well-respected don – has to interact with dons from other parts of the city. Suddenly traces of uncertainty, wariness, even vulnerability, appear on his face as he tries to size up these potential rivals or enemies, whose speech he can’t easily follow. As viewers, we have been thinking of Velu as a larger-than-life figure, firmly in control of his fiefdom, but now we see him in more human terms. There is also something moving about the suggestion that Velu, despite spending almost his entire life in Bombay, never properly learns the city’s majority languages – this gives his situation a nuance that differentiates it from the story of the young Vito Corleone in Little Italy in The Godfather Part II (a film that Nayakan has clear links with), slowly picking up English as he makes his way in the world, so that the transition from the Italian-speaking Vito (played by Robert de Niro) to the English-mumbling patriarch (Marlon Brando) seems wholly natural. Nayakan, on the other hand, gets much of its edge from Velu’s immutable foreignness. No wonder Mani Rathnam expressed dissatisfaction (in one of his interviews with Baradwaj Rangan) with the Hindi remake of the film, Feroz Khan’s Dayavan: the remake was about a Mumbaikar in Mumbai, where he is culturally and linguistically at home, which meant an important subtext about alienation was absent.

The other scene is a comic one, but provides food for thought too. It is from Quentin Tarantino’s Inglourious Basterds, a wish-fulfilling alternate history in which Nazi hunters save the day during World War II. The villain here is Hans Landa, played by Christoph Waltz: he is terrifyingly smooth, sharp... and a polyglot, which gives him an edge over the good guys, the “Basterds” led by Aldo (Brad Pitt), all of whom are barely fluent in one language, English (more accurately American, spoken in a distinct Southern drawl). One of the film’s funniest scenes has Aldo and team disguised as Italians at a party, while Landa – well aware that they are imposters – toys with them like a cat slowly prying open a box of inauthentic but tasty pasta. (Earlier, when we heard Brad Pitt say “I can speak some Aye-talian” - in response to his German informer contemptuously asking if they know any language other than English - we could tell these boys would soon be treading on thin ice. And so it comes to pass.)

It’s an excellent comic premise, one that combines tension with laughs, and also invites the viewer to consider his own responses to the characters. Here are Aldo and company trying to save the world by infiltrating the dens of the Nazi top brass, and yet they barely understand a word of German. We are supposed to be rooting for them, but they look and behave like hicks – the Three Stooges handed a World War and unsure what to do with it – confirming every stereotype of the insular, ignorant American; in comparison the nasty Landa seems like a higher, more cultured species. We cringe when Aldo says “Bonjourno”, enunciating the word much too deliberately. Then we chuckle when Landa (who seems able to toss off any language as if he were born speaking it) turns out to be a fluent Italian speaker too, and when he deferentially asks the “Italians” if his pronunciation is right. (“Si si, correcto,” Aldo replies, before grunting “Arrividerci” - or "A river derchy" - in a ludicrously fake accent.)

Almost in spite of their tomfoolery here, the good guys do eventually get the job done. But when Aldo gets the better of Landa in the film’s last scene, he does it not by winning a verbal duel but by using a knife to carve an incriminating swastika on his adversary’s forehead. The caveman comes out on top because he knows how to use crude tools – and speech be damned.

[Did a version of this for Business Standard. An earlier post here on Tarantino's Django Unchained, in which Christoph Waltz plays another character who uses language so fluidly that everyone around him looks like they've just stumbled in from the Paleolithic]
Posted by Jabberwock at 7:30 AM