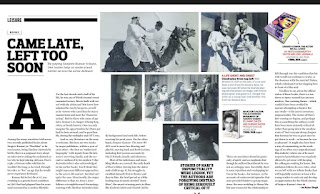 (The latest India Today has this piece I wrote, touching on the two new Sanjeev Kumar biographies. As you can see, I have borrowed their cheeky headline for my post.
I also moderated a book-club chat a couple of days ago with Sumant Batra, co-author of An Actor’s Actor. A video of that chat is on the Books Etc Facebook page, and should be accessible even if you don’t have an FB account. The link is here.)
--------------------

Among the many anecdotes told across two recently published books about Sanjeev Kumar (or “Haribhai” as he was known, being Harihar Jariwala by birth), there is a poignant story about an interviewer asking the acclaimed actor why he kept playing old men. Hari’s reply: a fortune-teller told him he wouldn’t live long, so he tried, through his roles, to “live” an age that he would never experience firsthand.

Kumar did in fact die at 47, succumbing to a genetic heart condition that had plagued him for years (and was not helped by a careless lifestyle filled with late-night eating and drinking sessions). For the last decade and a half of his life, he was one of Hindi cinema’s most canonised actors. Movie buffs who are well-versed with the 1970s and 80s know how admired he was by his peers, as well as by viewers who cared less for starry mannerisms and more for “character acting”. 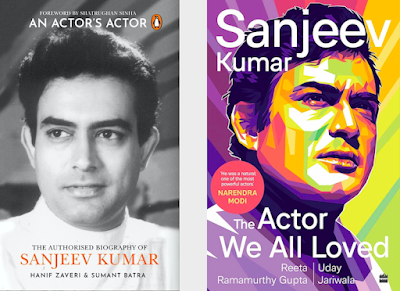 But for those who came of age later, Kumar is in danger of being forgotten (or even barely-known). Despite having worked in many sorts of films, including formally adventurous works by Basu Bhattacharya (Anubhav), the relatively grounded “Middle Cinema” of Gulzar, Basu Chatterji and Hrishikesh Mukherjee, and Satyajit Ray’s only Hindi film (Shatranj ke Khiladi), much of the cinema he is most associated with is today seen as quaint and creaky. Unlike many of his contemporaries who continued working – with varying results – past their sixties or seventies, he has been off the radar for well over three decades: one can only imagine the opportunities he would have got if he had been around, and had stayed fit enough to do good work, during the multiplex and OTT eras.

And so, any literature on the man is welcome. But here are two books by major publishers, within a year of each other – the first an “authorized biography” with inputs from the late actor’s surviving family, and the second co-authored by his nephew Uday Jariwala (who is also acknowledged in the earlier book). You’d think they might represent different approaches to the actor’s life and art, but that isn’t quite the case. Structurally, the major difference is that An Actor’s Actor follows a straightforward chronology, starting with Harihar Jariwala’s family background and early life, before covering his peak years. On the other hand, Sanjeev Kumar: The Actor We All Loved is more free-flowing and playful, moving back and forth in time, including first-person accounts by Hari’s friends, family and admirers.

Most of the milestones, pitstops and stumbling blocks are covered: the early death of Hari’s father, leaving him the oldest male child at age eleven; his struggles to establish himself as an actor, first in the theatre and then in film; the brief period as a leading man in much-derided “stunt films” (this was a lithe Sanjeev Kumar – or “Sanjay Kumar”, his initial screen name – at his most dashing and hero-like); the award-winning parts in films like Koshish and Dastak. There are anecdotes about his generosity of spirit, and an emphasis that though he suffered heartbreak he was not an unhappy man. Inevitably there is some repetition and overlapping between the books – for instance, in the accounts of controversial episodes that once provided fodder to gossip magazines: the near-wedding to Hema Malini (one reason for the relationship to fall through was the condition that his wife would not continue to work), or the closeness with the married Nutan which culminated in her slapping him in front of a film unit.

Needless to say, given the official or near-official status of these publications, there is a tendency to tiptoe around less savoury matters. One running theme – which couldn’t have been avoided or glossed over by anyone attempting a Sanjeev Kumar study – is the actor’s notorious unpunctuality. Even with the knowledge that mainstream Hindi cinema was far from an exemplar of professionalism in the 1970s (remember all those stories about actors doing multiple shifts in a day, stumbling from one shoot to another, often unaware of the name of their character in the film of the moment), the stories of Sanjeev Kumar’s late-coming are legion. Perhaps this is something the authors could have been more seriously critical of, rather than going down the anodyne route of “but everyone always forgave him because he was so good once he did get down to work” or “he was so pleasant and had such a warm smile, it was impossible to stay angry at him”. It might also have been a way of commenting on the workings of an industry where one of its most respected practitioners was regularly allowed to get away with keeping his colleagues waiting for hours.

Adulation follows its own path, though; what we are left with are tribute books that will hopefully motivate at least a few young readers to seek out and develop an appreciation for the Hindi cinema of Sanjeev Kumar’s time.

(Here is a column from a few years ago, awaiting a Sanjeev Kumar book and discussing my ambivalent feelings about him)