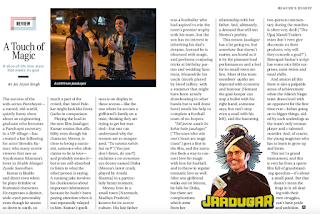 (Did this review – of a film that has drawn lukewarm responses, but which I enjoyed a lot – for this month's Reader’s Digest India)

The success of the web-series Panchayat – a rooted, old-world, quietly funny show about an engineering graduate who becomes a Panchayat secretary in a UP village – has created a fan following for actor Jitendra Kumar, who many movie viewers first saw as Ayushmann Khurana’s lover in Shubh Mangal Zyada Saavdhan. Kumar is likable and direct even when he plays irritable or frustrated characters (as he often does in Panchayat, navigating village protocols and bureaucratic red tape). He expresses a distinct, wide-eyed personality even though he seems so down to earth, so much a part of the crowd, that Amol Palekar might look like Greta Garbo in comparison.

Playing the lead in the new film Jaadugar, Kumar retains that affability even though his character, Meenu, is close to being a narcissist, someone who often claims to be in love – and probably means it – but is too self-absorbed to listen to what the other person is saying. A running joke involves his cluelessness about important information because he hadn’t been paying attention when it was repeatedly relayed to him. Kumar’s goofiness is on display in these scenes – like the one where he accosts a girlfriend’s family on a train, thinking they are heading off to get her married – but one can equally understand why the women are so exasperated. “Tu sunnta nahin hai na?!” exclaims a no-nonsense eye doctor named Disha (Meenu’s latest crush, played by Arushi Sharma) in a particularly funny moment. 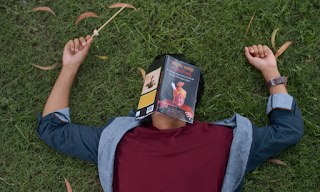 What offsets Meenu’s cockiness – and lets us root for him to a degree – is that the screenplay keeps pulling the carpet out from under his feet: another comic motif is that of this “hero” saying grand-sounding things that prepare us for him to do something big… but then in the next shot we see that hard reality has struck.

Meenu lives in a small town (Neemuch, Madhya Pradesh) known for its soccer culture. His late father was a footballer who had aspired to win the town’s premier trophy with his team, but the son has no interest in the sport or in being the inheritor of his dad’s dreams. Instead he is obsessed with magic, and performs basic tricks at birthday parties and wedding functions. (“Main hoon Magic Meenu. Part-time lover, full-time jaadugar.”) Meanwhile his uncle (nicely played by Javed Jaffrey, with a stammer that might have been actorly showboating in other hands but is credibly done here) needs his help to complete a football team of no-hopers, and to challenge for a trophy that has been out of reach. 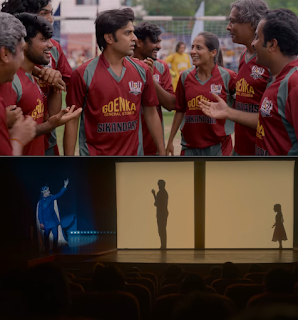 “Dil jeetne waale ko kehte hain Jaadugar,” goes a line in the film, and the script finds a way to connect love for magic with love for football, and to throw in regular romantic love as well. After one girlfriend walks out on Meenu (you can’t fault her) he falls for Disha, but there are complications which stem from her relationship with her father. And, ultimately, a demand that will test Meenu’s probity and create some suspense for the final match played by his team.

Which means Jaadugar has a lot going on, but somehow that doesn’t matter, anchored as it is by the pleasant lead performances – and, importantly, by a feel for its small-town milieu. Most of the soccer team members (and their interrelationships) are depicted with economy and humour (Hemant the goal-keeper can stop even a bullet with his right hand, someone says; but he can’t stop even a snail with his left), and the bantering two-person commentary during the matches, with director Sameer Saxena as one of the commentators, is often very droll. (“Doosri team ussko aise gher rahi hai jaise woh paani-puri waala ho” – though of course the subtitles turn this into “They have surrounded him like he’s the last slice of pizza at a party.”) Biswapati Sarkar’s script has nice little surprises, mini-twists and tonal shifts, including the balancing of pathos with comedy: consider that the protagonist is someone who lost his parents to an accident as a boy – and his uncle feels guilty about this – but the screenplay still manages to derive some low-key fun from their interactions.

And amidst all this there is also a palpable sense of achievement when the Adarsh Nagar team draws level with an opponent for the first time ever in a league match – before going on to bigger things, aided by underdogs such as the team’s only woman player, an outsider who hadn’t expected to be included… and of course the self-absorbed young magician who has to learn to grow up and listen. This isn’t a grand tournament, and this is very far from a sports film full of inspirational speeches – it’s a small pond. But that doesn’t mean the frogs in it can’t have a sense of pride and aspiration, while dealing with their own struggles.

Posted by Jabberwock at 1:32 PM