You know those musical sequences that accompany the closing credits in Hindi films now? The ones where the actors go from performing a song straight to breaking character, so that you can’t tell if this is a promotional spot or a collection of goofy outtakes or an elaborate home video made for future generations of the crew’s family. I usually tune out of those scenes quite fast, but with the new film Good Luck Jerry – a comedy-thriller about a young Bihari woman who works for Punjabi drug dealers to raise the money for her mother’s medical treatment – I watched the closing-credits sequence all the way through. 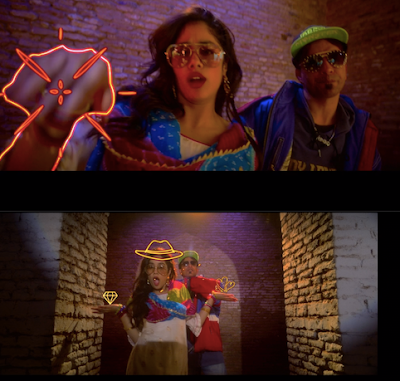 The song is called “Snake Bite”, wherein Janhvi Kapoor and Deepak Dobriyal strike hip-hop poses while animated neon designs – serpent tongues, hearts, bat-wings, a Jughead Jones hat – bedeck them now and again. The scene has only a very tenuous connection with the film that preceded it, but this seemingly mismatched duo is having fun: Dobriyal is always good to watch (we see so little of him anyway these days) and Janhvi made a few naagin gestures that reminded me of her mom, and it’s all nice and goofy in a good way. It made me wish there had been more of this particular brand of zaniness in Good Luck Jerry.

What there is – in a story adapted from the Tamil film Kolamaavu Kokila, and transposed to a still-very-much-udta Punjab where one can now apparently find drug-runners under every rock – isn’t bad. It would be difficult to make a poor film anyway when you have performers like Dobriyal and Mita Vashisht in important supporting roles, an appealing enough Kapoor in the lead, a colourful cast of characters, a quick-paced plot, and Raj Shekhar lyrics that smoothly incorporate words like “paracetamol” and lines like “Beauty beauty beauty beautiful tu / Tootte sitaaron waali dhool tu” in describing this small-town milieu and the state of mind of the aspirational characters in it.

Jerry (Kapoor) is working in a massage parlour as the film opens, to the disapproval of her mother Sarbati (Vashisht) who makes and sells vegetarian momos for a living (“Darjeeling ke hain, bana Bihari rahe hain aur pel Punjabi rahe hain”). Worse is to come for the family, though, when Sarbati is diagnosed with lung cancer – curable, but the treatment will cost over Rs 20 lakh. After Jerry and her younger sister Cherry (Samta Sudiksha) inadvertently have a run-in with cocaine dealers, Jerry discovers that transporting the maal can be very lucrative business, and thus begin her adventures with various oddballs, from the smitten Timmy (Jaswant Singh Dalal) and his gang to the distributor Malik (Saurabh Sachdeva) who trades not just in drugs but also in fish metaphors (and even places Jerry’s cellphone in an aquarium to ensure that no one eavesdrops on them). 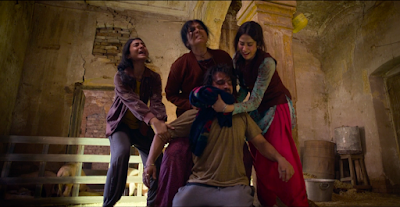 Meanwhile, each of the women has a swain in waiting: an elderly neighbour has a soft spot for the widowed Sarbati, a young man perpetually dressed as a groom wants to marry Cherry, and of course there is the nominal “hero”, the swaggering roadside Rinku (Dobriyal, with a wider palette of colours in his hair than Janhvi has in her clothes). But part of the film’s purpose is that these male characters – who might have been protectors in another sort of narrative – are destined to remain side-kicks and more often than not turned into comic figures, while the women are perfectly capable of taking care of themselves. This motif will reach its logical conclusion in a promising but overlong scene where a lecherous villain, a possible sexual threat to Jerry and her family, is efficiently dealt with by them (while the three suitors wail away outside as they imagine what might be happening).

Good Luck Jerry has a few enjoyable moments, especially the ones involving a limited number of characters: the family scenes between Jerry and her mother and sister (after her cancer diagnosis, the pragmatic Sarbati gets all made up for a photo-taking session for the picture to be used after her impending death; may as well do it now, she says, while my face is still healthy). Or the ones where the over-confident Rinku keeps misunderstanding everything and coming up with the explanations that suit him best (“Oh, she doesn’t want me to drive the van because she wants me to sit with her”)… until the tables are turned on him and he realises that “his” girl has been leading a more adventurous life than he could imagine.

But there are a few too many supporting characters trying too hard to be eccentric in their different ways, and things inevitably get diluted as people randomly pull out guns and wave them around (an elderly drug-dealer named Daddu is treated as important by the script, but he did nothing for me). The film also has a tonal problem: on the one hand, it seems to want to be an out-and-out black comedy with cartoonish undertones in the vein of a Delhi Belly (also a story about innocents caught up with unsavoury types), but on the other hand the mother-child-cancer story can’t avoid making a few detours into sentimentality.

Hindi cinema has set a low bar for itself in recent times, and a moderately entertaining, sincerely made film like this one probably deserves some respect. But Good Luck Jerry is too often inert, and weighed down by the conflicting tones and the busy-ness of its plot, much like the bed filled with dozens of little bags that Jerry has to transport around in one sequence – a few containing the promised stimulants, others just salt or powdered sugar or maida.

(My other Money Control pieces are here)

Posted by Jabberwock at 4:20 PM