Sweet Cocotini: in which Shirley MacLaine rolls back the decades

(Wrote this tribute to Shirley MacLaine for Mint Lounge, after seeing her brief appearance in the second season of Only Murders in the Building. My review of the first season is here)
---------------- 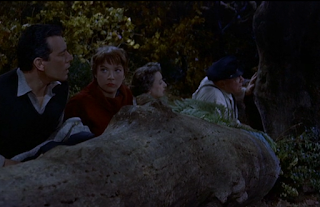 In a droll scene in Alfred Hitchcock’s 1955 film The Trouble with Harry, a talkative old Captain, believing he has accidentally killed a man, hopes to be alone with the corpse so he can figure out what to do; unfortunately people keep showing up, even in this secluded Vermont forest. When a painter sits down and begins drawing the dead man, it’s too much for the Captain, watching from behind a tree. “Next thing you know they’ll be televising the whole thing,” he mutters, and you have to feel for him – don’t an unwitting murderer and his victim deserve some privacy?

Television, being quite new at the time, could be used as shorthand for intrusive new technology – but one wonders what this ancient crab would make of our current era where podcasters-cum-investigators can reach out to a large online audience in real time, breathlessly relaying information even as a crime is being committed or a suspect pursued. As in the enjoyable new show Only Murders in the Building, season two of which has begun streaming on Disney-Hotstar.

I draw this line between these two generally unrelated works because they have one delightful thing in common. Shirley MacLaine made her movie debut in The Trouble with Harry (as Jennifer, a young single mother who recognises the dead man as her ex-husband… and is none too perturbed about it). Now, nearly ninety, she makes a guest appearance in the new series (as the mother of another murder victim). The two roles are separated by seven decades, or more than half of film history; and yet one of MacLaine’s signature traits – a knowing, world-weary, vaguely suspicious glint in the eye – is still intact. 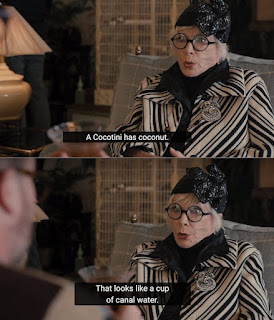 Her entry in Only Murders in the Building – idly wondering who killed her daughter, then asking for a Cocotini and complaining when someone hands her a chocolate syrup concoction instead of a coconut cocktail – adds a layer to a story that has already derived much of its humour from generational interplay. Of the show’s three protagonists, Charles and Oliver, played by veterans Steve Martin and Martin Short, are in their seventies; then there’s the millennial Mabel, played by Selena Gomez. This unlikely trio, true-crime podcast addicts living in a posh New York building, team up to solve murders (or bungle investigations). And with MacLaine’s arrival, the goalposts briefly shift, because Steve Martin now looks like a boy in comparison.

Actually, he could have played Jennifer’s little boy in The Trouble with Harry – the one who draws her attention to the deceased man. “Thank providence! That’s the last of Harry,” she says with a smile, and then tells her son she will make him some lemonade when they get home – a wholesome young mom in a wholesome, Eisenhower-era America. From her very first scene in her first film, MacLaine combined an ice-wouldn’t-melt-in-her-mouth surface with an honest, unaffected sweetness. 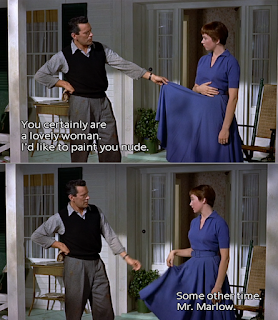 She was an unusual Hitchcockian heroine for this period, considering that he made this film in the middle of three films with Grace Kelly – all silky elegance, primed to become a real-life princess. There are many ways of emphasizing the contrast between these two women: through the clothes, for example (see the simple grey dress worn by MacLaine in TTWH and compare it with the haute-couture wardrobe that Kelly brings to James Stewart’s apartment in Rear Window). If Kelly epitomised the mysterious Hitchcockian blonde, feminine and reserved on the outside, but with a sly side waiting to emerge, MacLaine was the opposite: made up to look boyish, she had a frank, insolent gaze and a sharp tongue, but there was a current of warmth underneath. And she was breathtakingly poised for a 20-year-old, with a straight-faced playing of outrageous moments that must have pleased Hitchcock: a climactic scene where she explains the complicated chronology of events to a doctor is done with an assurance that a senior actor might have envied.

MacLaine’s high tide as a star-actress came a few years later, with Vincente Minnelli’s Some Came Running, and then most notably with Billy Wilder’s The Apartment, a classic portrait of a wisecracking, seemingly self-reliant working-class girl who is also emotionally vulnerable, ripe for exploitation by powerful men. Her performance brings a devastating charge to scenes like the one where her character is callously handed a hundred-dollar bill for Christmas by the married man who is stringing her along. To cite a modern reference point, it is easy to draw a line from MacLaine’s elevator girl Fran to the characters of Peggy and Joan, working 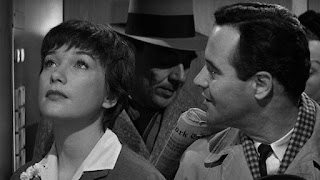 in a male-dominated office environment in the series Mad Men, which is set around the period that The Apartment was made in. One early Mad Men episode even referenced Wilder’s film. (Though it’s also worth pointing out that the young working women played by MacLaine and by Janet Leigh in Psycho the same year – also getting unwelcome attention from her boss’s crass buddy – could sometimes seem more in control, more capable of using wry humour to deflect bad behaviour.)

In the 1960s and 70s, when MacLaine’s kid brother Warren Beatty was becoming a big star, there was a sense that Hollywood didn’t quite know what to do with her; even at a time when women’s roles were more varied, she may have been too kooky and self-deprecating a presence. Many of the films she did during this period (among them The Yellow Rolls-Royce, The Bliss of Mrs Blossom, and Sweet Charity) acquired cult followings (my mother and her south Bombay friends remembered them fondly decades later) without ever entering the “essential movies” canon. She made an unexpectedly funny pairing with Clint Eastwood in the Western Two Mules for Sister Sara (perhaps the first time Eastwood appeared onscreen opposite a strong or unpredictable woman) but the shooting wasn’t smooth and director Don Siegel felt she was “unfeminine”.

Yet she never stopped working, and inevitably the worthy roles in decent films (along with salvaging appearances in clunkers) came every few years: from The Turning Point in the late 70s to an Oscar win for Terms of Endearment, and author-backed parts in Steel Magnolias and Madame Sousatzka. The qualities that had set her apart from the more conventionally glamorous female stars of her age (Sophia Loren, Elizabeth Taylor, Natalie Wood, Audrey Hepburn), and had made her more difficult to cast, also aided her longevity. She could effortlessly match shoulders with someone as zany and volatile as Jack Nicholson. She could stare down Eastwood’s macho cowboy, even determining the form of a film (a comical zoom shot to capture the astonishment on his face as he realises this nun isn’t quite a nun), or adeptly play comedy with a man thirty years her junior (Nicolas Cage in Guarding Tess).

And she’s still around, and still bringing a distinctive energy to the frame. “Your husband’s dead?” Jennifer is asked in The Trouble with Harry. She nods and asks: “Is your lemonade okay? I like it tart.” That’s what Shirley MacLaine has been for decades, but with a touch of syrup – like chocolate added to a Cocotini – when you don’t expect it.

[An old post about Two Mules for Sister Sara is here]