Thought I’d take out the time for a personal/photo post about some of the events and signings I have participated in for the two animal anthologies that came out a few months ago: Cat People, edited by Devapriya Roy, and The Book of Dog, edited by Hemali Sodhi. This is also, of course, another reminder about these two splendid books, which have some excellent writers and excellent pieces in them even if you don’t specifically identify as a “cat person” or a “dog person”. (More information in this post.)

Be warned that these photos feature a series of animal-themed T-shirts bought specifically in the enthusiasm of having these books out. 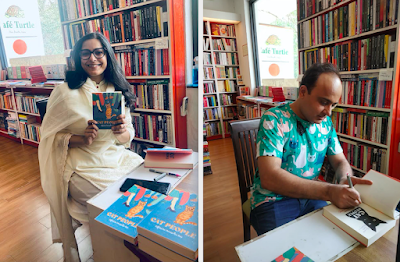 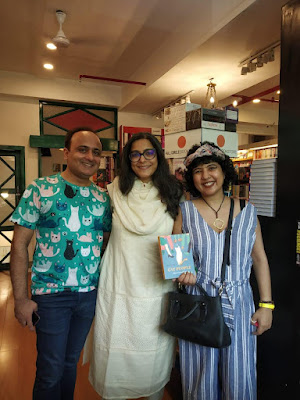 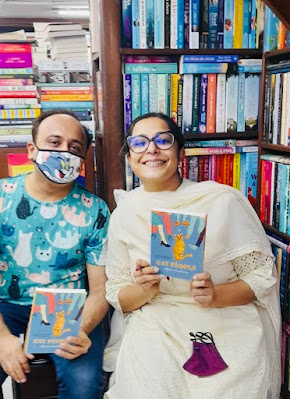 After the signings we met Samit Basu (who isn’t in the book but who used to prowl the blogosphere as Putu the Cat many decades ago) for a good solid lunch at Andreas. 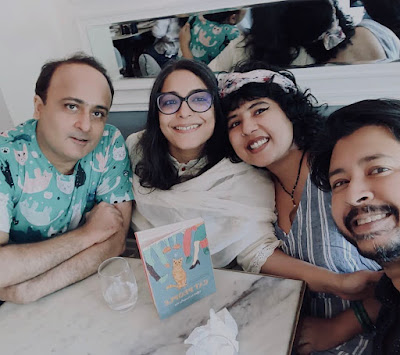 (Coincidentally it was at Samit’s birthday party in December 2019 that I got to hear of the cat anthology for the first time – through a casual chat with Simon & Schuster editor Himanjali Sankar, after which I pestered Devapriya to let me be in it. “I thought you were a dog person!” she said… quite reasonably, given what my social-media posts of the past few years have looked like. But the cat essay, which I worked on during the first lockdown, became one of the most satisfying personal pieces I have written, being as much about my mother as about the cats in our lives.) 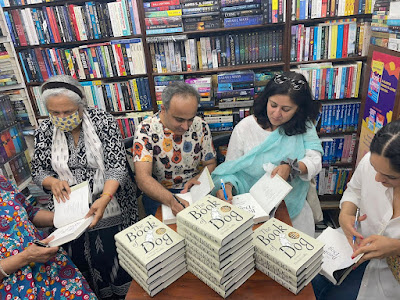 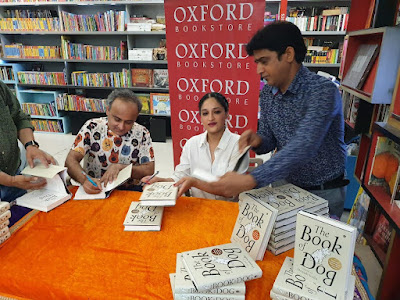 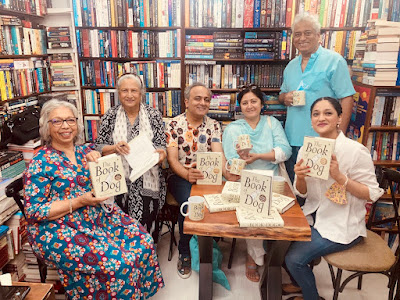 Also a pic with old friend and fellow dog person Udayan Mitra, my editor for The World of Hrishikesh Mukherjee in what now feels like another lifetime. 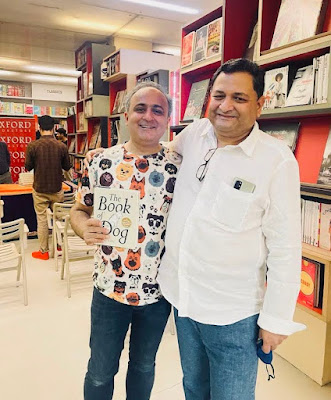 Cat People book signings at Bahrisons Vasant Kunj a couple of months ago – this one with a few of the other contributors to the book, including Vangmayi Parakala, Aneela Zeb Babar, Maneesha Taneja, Anukriti Prasad, and the youngest writer, Arhaan Babar. Please don’t miss the cat shirt here, it is the brassiest one I have (so far). 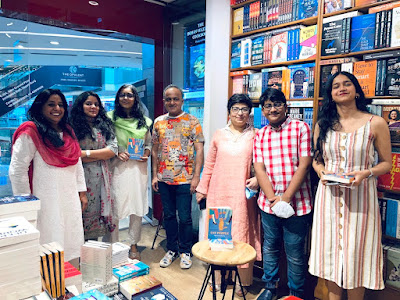 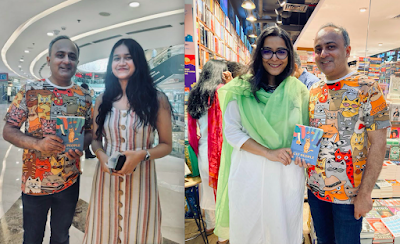 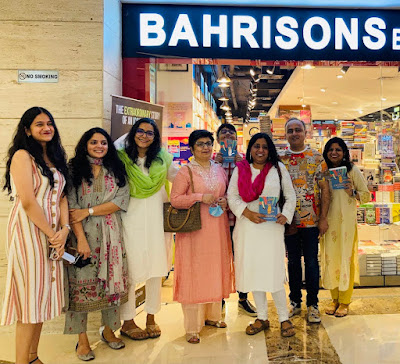 And a cosy little Cat People event at the newly opened Kunzum store in Vasant Vihar just yesterday. Contributors Aditi Sriram and Gayathri Sankar joined us for this one, and Maneesha, Aneela, Arhaan and Anukriti were there too. 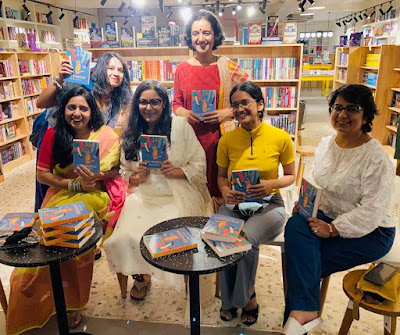 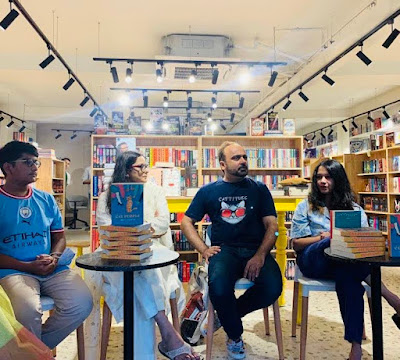 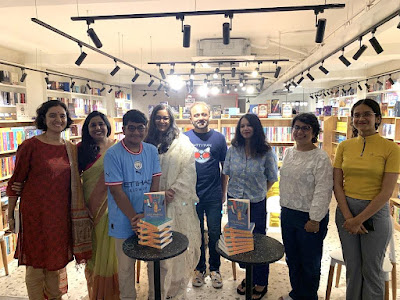 In a cat shirt with dog-lady Hemali Sodhi 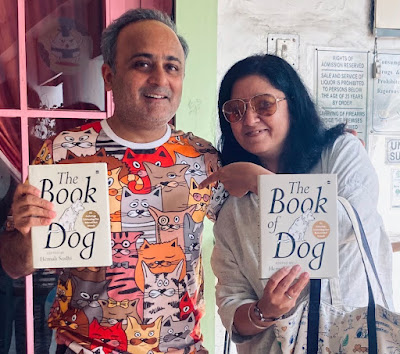 In a dog shirt with cat-lady Meenakshi Reddy Madhavan (and a very noir-ish photo this is too). 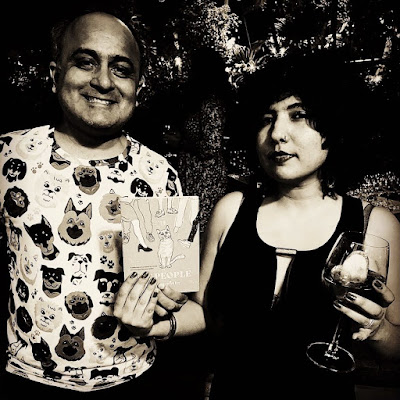 Lara and Kaali with the books. 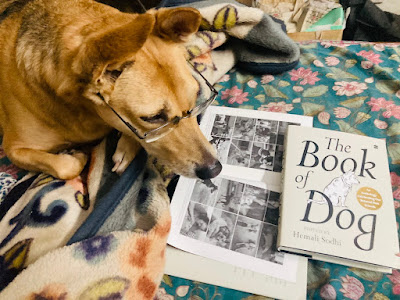 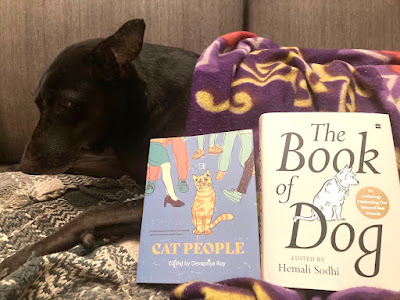 An online discussion about the cat book with a few contributors who couldn’t be there for the later physical events. 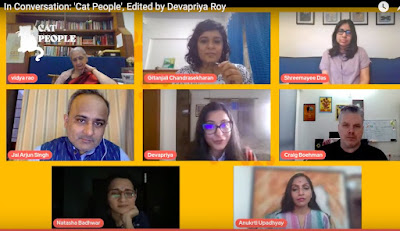 And in my catty sweater last December, when Cat People had just arrived. 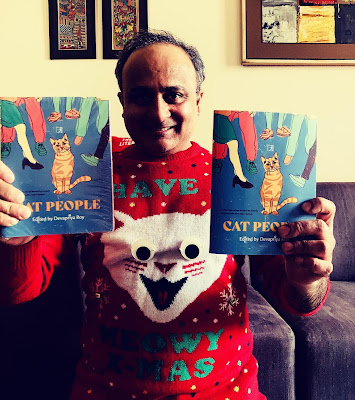 Now, try to forget about the flashy apparel and go buy the books...