Hum log: why a peepal tree in our park has a dog spirit in it

If you’re a dog person but feel daunted by the nearly-three-hour running time of the new Kannada film 777 Charlie (I haven’t yet taken time off to watch it), you could prep yourself with a 60-minute Tamil film instead. Produced by and starring Vijay Sethupathi, the 2021 Mughizh is about a young girl drawn out of her shell through the arrival of a family pet, but then traumatised when the dog dies in an accident – whereupon her parents try to help her heal. 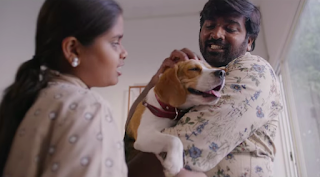 It’s a sweet film, full of likable people (including Sethupathi’s real-life daughter as the girl, Kavya, and Regina Cassandra as her mother), and it’s good to see a big star get behind a project like this. I had minor reservations about the story’s use of the animal as a Macguffin, a cipher for the playing out of human emotions and relationships (which are presumably the important things). But one scene that resonated with me involved a dhobi, given the task of burying the dog, trying to comfort Kavya by saying the body would be a good fertilizer for a nearby tree: “Just wait and see, the leaves will bloom soon.” Faced with a disapproving stare from Kavya’s dad, he sheepishly adds, his voice trailing off, “The dog has not died, it will always be with us… in the form of a tree.”

Of course, this provides no solace to the girl; such grand-sounding big-picture narratives – with the implication that the deceased pet will in a sense “live on” – mean little during an intense grieving process.

In a month that marks ten years since the darkest day I have known – the sudden and untimely death of my canine child Foxie, aged just four, in June 2012 – I can relate with both Kavya’s refusal to be consoled and the grave-digger’s big-picture wisdom. In the immediate aftermath of Foxie’s death, I would have bristled if someone had offered me such platitudes. And yet, as time went by, I found comfort in two peepal trees that were linked to her.

One of those trees was the one we planted just behind Foxie’s grave at the animal shelter where she was buried; I only see that tree once a year or so, when I visit the place. But the other tree is one that I walk beneath every day. It has no connection with Fox’s mortal remains, it certainly isn’t being “fertilized” by her, but it grows in the middle of our colony park where she spent many of her happiest moments. 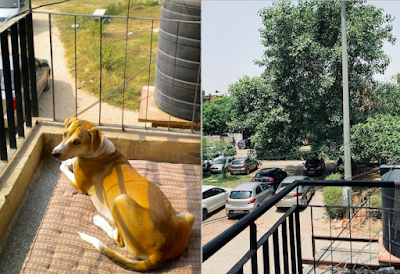 “I began planting saplings to mark births and beginnings,” writes Sumana Roy in her extraordinary book How I Became a Tree, a series of unusual, interlinked reflections on (among many other things) the differences between tree time and human time. The peepal tree in our park was planted just a few months before Foxie died; by the time she left, it had grown to around six feet. Today it is gigantic. In a few old photos I have of Fox sitting in our DDA flat balcony overlooking the park, a barren spot with a bench is visible in the middle distance. This was where the sapling would be planted; it still takes my breath away to look at those photos and then to look at the huge tree occupying the same space today.

On the pace at which plants go about their lives in contrast to the frenetic, deadline-driven world of humans, Roy writes: “I began envying the tree, its disobedience to human time […] It was impossible to rush plants, to tell a tree to ‘hurry up’.” This reminds me that the day after Foxie’s death, when time had seemingly come to a standstill, I saw an urgent, threateningly worded letter from the electricity office about an unpaid bill, with a last-date deadline for that very day, which had me scrambling to find my chequebook and get the cheque delivered to the office on time – on a day when I hadn’t expected to be preoccupied with such matters. 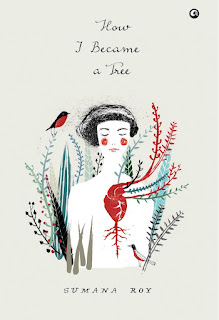 In the long run, of course, tree time seems very languid compared to ours (“Here I was born, there I died,” says Madeleine in Hitchcock’s Vertigo, tracing her lifetime on the cross-section of a tree that had lived for a thousand years, “It was only a moment for you, you took no notice”) – but saplings can seem in an awful hurry to grow up. I can never forget the day when Foxie and I came across the young peepal tree after the removal of the protective wire mesh that had been placed around it for its first few months. Freed of its cage, it was suddenly more visible and had personality; we noticed it as if for the first time. She circled it hesitantly, got up on her weak hind legs to get a closer look; she opened and closed her mouth in that goldfish-like way that always seemed like she was muttering to herself; she took the end of her leash in her mouth like she did when she was nervous around someone new. Finally, after a few soft growls, she decided the tree could stay. 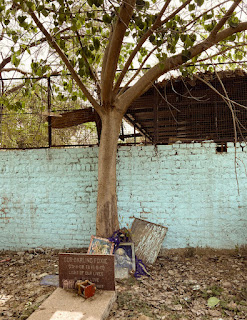 A couple of weeks later, she was gone, and in my more sentimental moments I feel like that encounter, and the attentiveness she showed the tree, was a way of passing some of her feeble spirit into it – as if to say, I’ll still be around here in this park in some form. As Roy writes, “turning into a tree seems a safe enough shelter for the dead who want to remain alive in some way”. It’s reassuring to think that the life of this majestic presence, which will probably be around for many decades to come, intersected momentarily with my Foxie’s brief stint at the crease.

P.S. pleasing that the Economic Times page carried this picture of Foxie with the column... 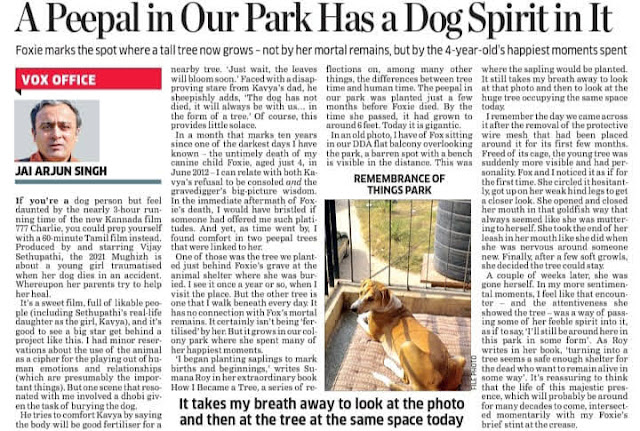 Posted by Jabberwock at 8:26 AM