On Manish Gupta’s 420 IPC: a low-key but engaging courtroom film

(It was good to see two excellent actors, Vinay Pathak and Ranvir Shorey, back together after a long time in the new film 420 IPC, now on Zee5 – though it would have been nicer if they had more to do. I wrote this piece for First Post)
-------------- 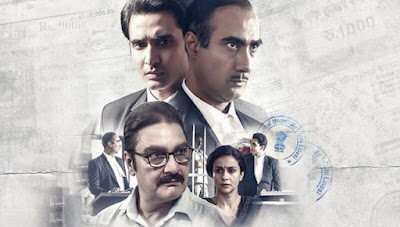 Few actors can play an unassuming, middle-class everyman as well as Vinay Pathak (whose skills have been sadly underused in the past decade), and this is emphasized by the opening scenes of the new film 420 IPC. Chartered accountant Bansi Keswani (Pathak) is with one of his higher-profile clients, the deputy director of the Mumbai Metropolitan Region Development Authority (MMRDA). “There should be different rules for the family members of government servants, no?” says this official during a chat about tax filing; Keswani responds with a quarter-smile and a politely unenthusiastic “Jee” – followed by a bob of the head and a “Main chaloon?” (“I’ll leave now?”)

An honest CA made uncomfortable by suggestions of power-mongering in high places, and by the entitlement of privileged people? Not long after this, we see Keswani disapprovingly muttering “Shakkar mein bhi paise bachate hain” (“They save money even on sugar”) after sipping bland tea served in an office that he knows conducts big financial transactions. At this point the line between the big-shots who pull the strings and the worker ants who serve appears to be fairly well-defined.

And so, when Bansi and his wife Pooja (Gul Panag, in the unglamorous avatar of some of her early films like Dor and Manorama Six Feet Under) find CBI officials raiding their house, the sense of violation is palpable. “Sir, main karze mein dooba hua aadmi hoon, main EMI nahin bhar paaya hoon,” Bansi protests as the officials tear his house apart looking for evidence of financial scams. We don’t know many details yet, but the sight of a middle-class family under siege can raise the hackles of a viewer who knows how vulnerable such underdogs are to miscarriage of justice.

Though Keswani is cleared of suspicion, a couple of months later he finds himself in trouble again when forged cheques adding up to 1.5 crore rupees are stolen from the office of another of his clients. This time matters are serious enough for him to be taken into judicial custody, and courtroom proceedings begin.

Some ambiguity about characters and incidents is built into this scenario, and 420 IPC makes the most of this uncertainty. While Pathak is ostensibly playing a Decent Man here, he is also a good enough actor to suggest sinister currents below a quiet surface, and he has done villainous or sleazy roles before – so a small question mark hangs over this persecuted-man narrative. What if…? Could it be…?

420 IPC is written and directed by Manish Gupta, who also wrote the 2019 film Section 375, about the legal proceedings surrounding a rape allegation. Both films have a comparable arc: an accusation or an arrest is made, we are privy to different versions of what might have transpired, new information comes in, people’s motivations and interrelationships are seen in a fresh light, there are little twists. Lawyers bicker, discuss the workings of the legal system. 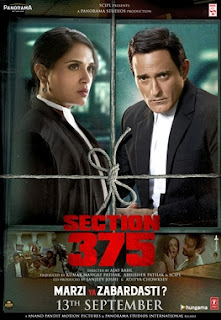 Section 375 involved a courtroom faceoff between an experienced senior lawyer (played by Akshaye Khanna, all eyebrows and smirk) and an idealistic younger one (Richa Chaddha), with the former patronisingly imparting life-and-law lessons as the trial proceeds. Initially it seems like 420 IPC will take the same route: in one corner we have the seasoned Parsi prosecutor Jamshed Ji (Ranvir Shorey), in the other the twenty-something defence attorney Birbal (Rohan Vinod Mehra). Shorey (who, in what seems another cinematic lifetime now, worked wonderfully well with Vinay Pathak in such films as Bheja Fry and Mithya) has played some unlikable characters recently, and here he is now, hair slicked back, giving his opposite number a smug once-over; meanwhile Mehra (son of the late Vinod Mehra who was one of the most genial performers of his era) has a fresh-faced earnestness. It seems likely that for much of the film’s duration, the cards will be stacked in the prosecutor’s favour.

But something more intriguing happens along the way. Without giving away plot spoilers: the greenhorn Birbal turns out to be more street-smart and willing to stretch the rules than one initially thought – this naïve-looking attorney knows how to be manipulative and extract data through police sources and hacker friends, and says things like “Information is power”. At the same time, Jamshed Ji becomes relatively marginalised, or at least not very threatening. There are subtle shifts in our perspective of these characters and others. 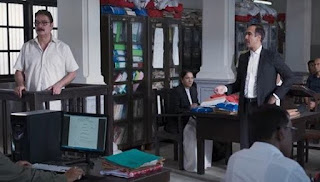 In its own way, this is also a story about social relationships and power equations across strata – how the nature of our interactions change depending on who we are with, and also on the language we speak. In the courtroom Birbal speaks crisp and fluent English, which might seem to give him an advantage, but there is a little moment where he is briefly excluded when Jamshed Ji and the judge (also Parsi) engage in a casual aside in their own dialect. There are glimpses of the different ways in which people behave with those who are more privileged and less privileged than they are (though by the film’s end, such categories and hierarchies will be blurred): in one scene, the usually mild-mannered Bansi speaks peremptorily to a security guard outside a bank; frustrated that the bank is closed and that the guard doesn’t recognise him, he mutters “Idiot!” as he walks away. The sophisticated-seeming Birbal growls “Side ho jaao na!” to two men who are taking a selfie on his scooter’s route.

There are a few jarring elements too, such as the occasional underlining of information and the repetition of statements, first in English and then in Hindi, or vice versa. “Woh faraar ho gaya,” someone says, and then after a pause, “He’s absconding.” (This sort of thing continues to a point where Jamshed Ji even ends up saying “Your Honour, shaayad accused ne handkerchief use kiya ho ya roomaal use kiya ho.”) There is also an annoying character, a junior lawyer, whose main function seems to be to ask Birbal at regular intervals (mercifully outside the courtroom): “But what if Keswani’s guilty?” In the process reminding us viewers – not that we needed these jogs – that that is an option too.

Formally speaking, 420 IPC is a subdued film, employing the aesthetic of a moderately well-produced Hindi television drama – not “cinematic” in the obvious ways (and especially not if you’ve just come from watching an Annette or a West Side Story). But it harks back to a type of cosy, comforting, low-budget indie film from a decade or two ago, including some of the ones that Pathak, Shorey and Panag used to work in. Despite the occasional stretching out of dramatic moments (and the little bilingual exercises mentioned above), it knows how to keep the plot moving, and the storytelling is largely to the point. In its better moments, this an engrossing depiction of a world where the line between small finance and big finance – or small scams and enormous ones – isn’t clear, and where it is hard to say who holds the reins of power at any given time.

Given all the balls it has in the air, and the (small and big) revelations that are made in the second half, I almost wished the film was a bit longer. It felt rushed at the end, as if a producer had looked at his watch during a trial screening, turned to the editor and said “Okay, eight minutes more max.” Another advantage of a longer running time could have been that Pathak and Shorey – two terrific actors who don’t have quite enough screen time despite their central-seeming roles – might have been given more to do. Hopefully a meaty role in a high-profile series is around the corner for them.

Posted by Jabberwock at 7:36 PM