Wrote this short piece for India Today about the newly restored Sabz Burj – a 16th century mausoleum – in Nizamuddin. It looks especially brilliant now with the lights on at night, and it’s a very good idea to have a look while visiting Sunder Nursery or Humayun’s Tomb.
(And yes, that’s Cereberus the hound in the first photo, guarding the tomb’s gates. He was happy to pose…)
--------------------------------- 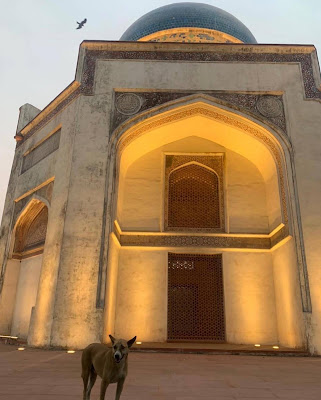 If you crossed the roundabout at the juncture of Delhi’s Lodhi Road and Mathura Road a few years ago, your eyes may have dimly registered the unremarkable-looking monument standing there; one among countless old structures that dot this city of many histories. Take the same route today and your sensory experience will be very different: even through dust and haze and the eyesores of bumper-to-bumper vehicles, the newly renovated Sabz Burj, its blue-tiled dome gleaming, will catch your eye from some distance away. The identity of the nobleman for whom this octagonal mausoleum was built – probably in the 1530s, during Humayun’s reign – is unknown, but there is no longer any question that the burj was an important part of the large necropolis that existed around the Hazrat Nizamuddin Aulia Dargah.

For the Aga Khan Trust for Culture (AKTC) team that began work on the renovation a few years ago, the challenges were obvious. Much of the incised plaster patterns on the eight walls (each a different design) had faded or disintegrated, as had some of the striking large medallions with Quranic inscriptions. Previous restorations had created problems: the use of cement, for instance, leading to increased water penetration. The entire set of turquoise-blue tiles on the dome (approximately 8,000 in number) have now been replaced and fixed with lime mortar, as have a large percentage of the tiles – in four distinct colours – on the monument’s drum or “neck”.

As Ratish Nanda, CEO, AKTC, points out, something of this vintage can’t magically be restored to exactly what it was hundreds of years ago; a certain degree of conjecturing – rooted in careful studies of Timurid architectural trends and construction methods – is inevitable. Take the burj’s sandstone jaalis (lattice screens), which no longer existed and had been replaced with aesthetically jarring metal grills – possibly during a period in the early 20th century when the structure was used as a police station. In recreating these jaalis, the team didn’t know the precise 16th century design, but as Nanda says, the important thing was to restore the integrity of the material originally used, and the processes by which the screens were made.

The big discovery during the restoration was the uncovering of what survived of an intricately painted ceiling in the domed chamber – the earliest existing painted ceiling for a Mughal Era structure. Faded though it is in its current form, a decision was made not to tamper with it to make it look shinier and more “touristy”. “We differentiate between craft and art, and have different approaches for them,” Nanda says, making it clear that the uncovered ceiling was being treated as an example of the latter. A reconstruction drawing has been made by the painter Himanish Das, however, and it creates a mental image of now-forgotten artists lying, Michelangelo-like, on their backs as they did this painstaking work.

There is a poignant subtext here: located where it is, at a congested roundabout that’s tricky to cross, the Sabz Burj is not the sort of tourist attraction that will draw large crowds the way the nearby Sunder Nursery or Humayun’s Tomb do. Relatively few people will step into the interiors and see the remains of the grand ceiling. Many will, however, get to gawp at the beautiful exterior – a reminder that a diligent restoration can make the past feel more real and, well, present.

Posted by Jabberwock at 8:49 AM