‘Wood’ you like a parenting manual with that child? On Annette and Richard Matheson

There are many things to say about the new film Annette, a delirious rock opera-thriller-melodrama about a sullen stand-up comedian named Henry, his soprano wife Ann, and their baby girl Annette who inherits her mother’s singing voice. I wouldn’t try to summarise them all here, but one of the more obvious talking points – in a film that keeps breaking Fourth Walls and drawing attention to its own building blocks – is that the title character is “played” by a wooden puppet.

To clarify, Annette is not supposed to be a marionette in the story: she is no Pinocchio, she is very much a real child and treated as such – she just happens to be depicted in puppet form, right from the time she makes her first appearance as an amniotic fluid-covered newborn. (I was reminded of the chalk drawings representing the exteriors and interiors of real houses in Lars von Trier’s Dogville.) In any case it might be said that Annette’s adult protagonists, though played by flesh-and-blood actors, are puppets too, as well as their own puppet-masters – dragging themselves across their respective stages, polishing a persona (Ann is tragic, forever dying and bowing; Henry is sneering, self-absorbed, pugilistic).

Given the playful nature of this film, the gimmick of the puppet-child doesn’t really have to mean anything – it can be just another instance of Annette breaking narrative rules and wearing its artifice on its sleeve. But for those who like venturing into the thorny thickets of analysis, there is an obvious interpretation: the idea that children, even well-loved children, are to some degree playthings and blank slates for their parents. In this case, here are two artists or performers who each, in different ways, use their puppet-poppet for their own enhancement. Ann imbues it with her greatest skill, turning it into a voice-box that will outlive her; Henry milks the “magical” gift to bask in reflected fame – and continue leading a hedonistic life – long after his own star fades. 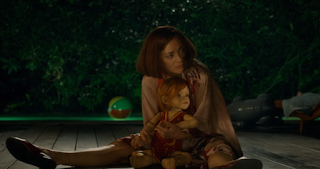 It all becomes very poignant in the end, but the darker, more savage aspects of this film – and the use of the puppet device – reminded me of another parent-child equation (also involving an artistic couple and their baby) in a literary work that is as formally unconventional as Annette: Richard Matheson’s 1954 short story “The Doll That Does Everything”.

At first this tale might seem to be the obverse of Annette: here, the child – a destructive little boy named Gardner – is the one in satanic control, and his parents, trying desperately to concentrate on their creative work, are the victims. But when they try to resolve matters by buying an almost-sentient doll as a companion for Gardner, the story moves towards a twisted resolution – and towards an image of a part-human, part-automaton family that resembles the midsection of Annette.

In terms of content alone, Matheson’s story must have been frowned upon in circles where the institution of parenthood is viewed as deeply sacred. (I wouldn’t know.) But equally central to its effect is how it is told, and this is another quality that links it to the avant-garde new film. A young Matheson used language boldly and fearlessly, taking big risks, paying no heed to the anodyne rules – “don’t use big words”, “be direct” – that get taught in so many writing classes. As the poet Ruthlen and his sculptor wife Athene despair at the balefulness of their child, a litany of startling descriptors (“Foaming moonstruck octopus! Untrammeled farrago!”), phrases (“Ulcers within ulcers throbbed”), and sentences (“Ruthlen, bogged in sticky pentameter, looked up one morning eyes marbleized […] At hipless sides, his fingers shook like leprous stringbeans in a gale”) leap out at the reader from the page. The author is having as much fun here as the cast and crew of Annette must have had putting together their most flamboyant long takes.

There are many delightful passages here to warm the nihilist’s soul, including a climactic scene where the doll starts misbehaving too and the couple are at their wits’ end – until epiphany strikes. “It’s not the doll’s fault!” screams Athene, “What good will tearing up the doll do? It’s Gardner. It’s that horrid thing we made together!” 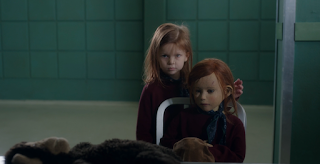 One can picture little Annette speaking a reversal of those lines: “It’s those horrid things that got together and made me!” No wonder that when we finally do see her as a “real” girl late in the film, it is at a point where she is free from her parents’ control. “Can I forgive what you have done?” she sings to her dad, “And will I ever forgive mom? / Her deadly poison I became / Merely a child to exploit / Can I forgive you both?”

[A couple of earlier posts about Richard Matheson: The Shrinking Man; the "anyways" conundrum]

Posted by Jabberwock at 9:23 AM