It’s all about bludgeoning your family: on the new show Tabbar

Really liked the new series Tabbar, on Sony Liv – and not just because I remember the frequent and boisterous use of that word by Punjabi grandparents and aunts as I was growing up. Wrote this for my Sunday Economic Times column
------------

The eighth and final episode of the gripping new series Tabbar – about a Jalandhar-based family in escalating trouble – opens with a flashback. Much of the show has centred on the retired Sikh cop Omkar Singh and his wife Sargun (played by Pawan Malhotra and Supriya Pathak), but now for the first time we see the younger versions of these characters, bantering and flirting during an early meeting.

“I don’t trust policemen,” young Sargun says teasingly, “They get so busy protecting other people, they forget about their own families.” In response he makes a grand yet intimate gesture, taking out a page from a notepad, writing “I, Omkar Singh, will always protect my family”, and handing it to her. 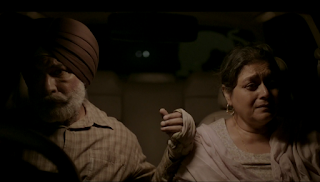 Shy smiles are exchanged; a relationship is on the brink of being solidified, a new world is about to begin. But sweet as the scene is in itself, there is something unsettling about it. And that isn’t because a viewer like me remembers the young Supriya Pathak and Pawan Malhotra (two of our most likable character actors of the 1980s) and can’t quite relate to these faces in the flashback. It’s because Tabbar has by now given us a dark demonstration of what it might mean to “look after your family” – through a series of events that the Singh clan has become unluckily caught up in, but to which small missteps or transgressions have also contributed. By the end of the show (no spoilers), the idea of familial unity has been so diluted that you aren’t sure whom to root for. In fact, the flashback itself ends with a cut to the present-day versions of Omkar and Sargun returning from a horrific night-time car drive, after a tragedy that made nonsense of another promise that he had (very sincerely) made to her.

From unobtrusive beginnings – a mix-up involving two similar bags, one of which turns out to contain a drug stash – Tabbar builds and builds, one incident begetting another, one small lie necessitating a bigger one, with moments of tension located in such details as a red smudge on a shirt (explained away as beetroot juice) or someone surreptitiously examining a house’s walls while a prayer ceremony is underway. Though it briefly threatens to become a psychotic-road-killer show (via the introduction of two peripheral Bonnie-and-Clyde-like characters), it remains consistently engaging – unlike most other Indian series I have watched (even the generally excellent Scam 1992), it didn’t sag in the midsection. Part of the reason for this is that the episodes are mainly 30 to 40 minutes each, not hitting the one-hour mark that many other shows do. But also, Tabbar maintains its focus on a relatively small group of characters: the four-member Singh family living in their “Happy House” in a middle-class neighbourhood (Omkar and Sargun have two sons, Happy and Tegi); a nosy neighbour; a cousin named Lucky who is a diligent young cop; and the potential antagonist, the politician Ajeet Singh. Many other shows, as they expand their canvases, add too many characters and subplots to the mix. This one finds the right pacing, and the right level of identification, to tell its story.

In recent times there have been a few Indian films and shows about families – dysfunctional or otherwise – falling into a vortex: some that come to mind are Titli (2014), Gurgaon (2017) and the series Mirzapur (the first episode of which has a pulsating home-invasion action sequence that Tabbar offers a lower-key variant on). But the protagonists of many of those stories are already into some form of crime and there are enough reminders that being a good, united family doesn’t have to imply a good value system. (Leatherface’s family in The Texas Chainsaw Massacre was sanskaari too – staying together, eating together, roles neatly defined and allocated – even as they chopped up teenage passers-by.)

In Tabbar, though, the family that ends up claiming first outsiders and then its own is not just innately “nice” but also clearly outside the ambit of such corrupting things as crime or politics. (An early scene has Omkar riding along on his scooter, the epitome of the powerless common man, looking dazed and lost as he is ordered to take a detour because of a political rally.) The man who stumbles into their lives and gets killed isn’t an innocent kid in a teen slasher film but the drug-dealing brother of a local politician. In such a scenario, you’d think the Singh family would be our object of sympathy and concern. And so it is for the most part, but something shifts along the way as they perform cover-ups and as we learn more. And this is the show’s real complexity: we never stop thinking of Omkar as a decent, humble, well-intentioned man; yet, by the final moments, one is forced to question everything. 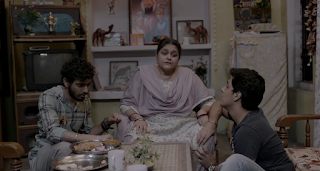 While a film like Titli was about a history of violence in a family ridden with masculine energies, the three-quarters-male family in Tabbar is more grounded and likable (even if the two sons are hiding secrets). But here too, a testosterone-driven idea of what it means to “protect” emerges. Inevitably, then, the Sargun character – who seems marginalised at one point – becomes the tragic figure, taking refuge in home and hearth but incurably haunted; even as she loses her bearings, she seems to be the only one who fully realises how far stepp’d they are in blood. A cynic (or a realist?) might say that she has seen families, and people within families, for what they are – and that madness is the only sane response to such understanding.

Posted by Jabberwock at 2:13 PM