For the Pleasure Without Guilt series: watching movie fragments 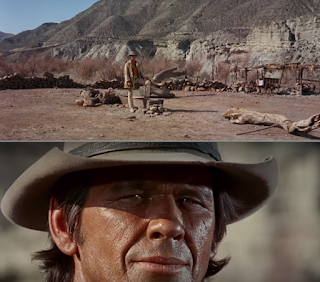 I don’t care for the term “guilty pleasure” when applied to reading or film-watching –there are many different ways of being positively stimulated by a film or book (we have complex reptile brains etc etc), and there should be no reason to feel guilty or sheepish about any of those engagements. So I was glad to hear about First Post’s new series titled Pleasure without Guilt, which offers a fresh take on the idea of the “guilty pleasure”. Could have written many pieces for it, but here’s the one I decided on: my increasingly tendency to re-watch fragments of films, and a special love for sequences driven by lush, opulent music scores.
--------------------------------------

As a teenage movie buff in the early-to-mid 1990s, a few years before the internet came into our lives, one of my prize possessions was a CD-ROM titled Cinemania, a collection of reviews, images and biographical entries – along with never-before-seen things called “hyperlinks” that took you to another page on the CD-ROM when you clicked on a highlighted word. (Oh, wondrous technology!) Most fascinating, though, was the section with short clips – two or three minutes at most – from around 20 major films. Up to that point, it had been literally unthinkable that I could watch a video on my fat desktop computer. 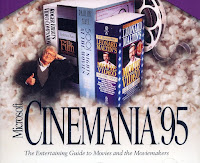 I hadn’t yet watched a few of these films, but I still enjoyed the clips, bereft of context: such as the tense scene from Taxi Driver where director Martin Scorsese plays a paranoid, menacingly soft-spoken man, one of Travis Bickle’s passengers. Or a fragment of the “Atlanta burning” setpiece from Gone With the Wind (which I found thrilling because I had recently read a Vivien Leigh biography which mentioned that producer David O Selznick first saw her and knew she was his Scarlett O’Hara when she visited the set during the filming of the Atlanta sequence).

At the time I felt sheepish about watching clips independently of films, and this feeling would continue during my first few years as a professional critic: after all, as a serious cineaste you’re expected to look at a movie in its entirety, to focus on whether it is a holistic or organic creation; you mustn’t obsess over specific bits of it. The earliest, most vapid reviews that most of us were taught to write were the ones that took a God’s Eye view of a film, dedicating a sentence each to the acting, direction, cinematography, story, editing and so on, practically adding up marks like we were assessors at a Board examination.

This is something in my movie-watching life that has changed over time: I am now unembarrassed about my propensity to watch and re-watch specific scenes. Being able to take pleasure in the small moment is, I find, as important and valid as anything else. I agree with the writer Paolo Cherchi Usai who lamented the fact that many cinema aficionados “hated fragments” – and that if the same attitude were applied to the other arts, “the Colosseum would be ignored by all; there would be no interest in the poetry of ancient Greece; no orchestra would perform Schubert’s Tenth Symphony”.

But there is another aspect to my obsessive scene-watching: many of the sequences I love are driven by lush, insistent background music, the sort that many people disapprovingly call “manipulative” – aimed at directing the viewer’s emotions, making us feel for a particular character or situation, or just getting our adrenaline flowing.

A few examples off the top of my head:

– The wordless, cat-and-mouse museum sequence in Brian De Palma’s Dressed to Kill: a middle-aged woman, visiting the Metropolitan Museum of Art, is first discomfited when she thinks an attractive man may be pursuing her – and then equally unnerved and indignant when she thinks he might be trying to get away from her. Full of De Palma’s visual flourishes – smooth, elaborate camera movements, many long unbroken shots – the scene builds in intensity with the aid of a deliriously over the top score by Pino Donaggio. Its own merits aside, one reason why I love this sequence is that it is a part-tribute to one of my favourite sequences from Alfred Hitchcock’s Psycho: Marion Crane’s long car journey after stealing a large sum of money, a drive that will lead her to a place of reckoning, the Bates Motel looming out of the darkness. (And that scene was also beautifully fuelled by Bernard Herrmann’s violin-driven score.)

– The climactic shootout between Harmonica (Charles Bronson) and Frank (Henry Fonda) in Sergio Leone’s Once Upon a Time in the West, again set to a stunning Ennio Morricone score that brings together at least three separate aural motifs that were used earlier in the film. This scene might on the face of it seem a classic depiction of screen machismo – two men playing a very male game of one-upmanship and revenge, the camera fetishizing them with magisterial long-shots and adoring close-ups and a dramatic flashback scene – but there is also something strangely poetic and courtly about it: in the prim way that Fonda removes his jacket and begins a tentative walk while assessing the position of the sun, and in Bronson’s fixed gaze on his adversary; it is like two dancers preparing for the most exhilarating performance of their lives.

– The operatic final moments of The Godfather Part III, with Michael Corleone’s silent scream after his daughter is killed, followed by a montage of dances with three different women at different stages in his life – all set to the intermezzo from Pietro Mascagni’s Cavalleria Rusticana.

– Though old Hindi cinema didn’t invest much care in sequences with great background music (as opposed to great songs), there are exceptions – RD Burman’s brilliant, multi-pronged score for Sholay, for instance, heard to best effect if you watch the film’s skilful opening-credits sequence which takes us across the whole topography of the village Ramgarh and its surroundings long before the narrative has brought us there. I have shown that scene in classes and shared in the pleasure of students pointing out little details that I hadn’t noticed before.
(A sidenote: I re-watch many wonderful song sequences from old Hindi films too – but one difference is that it’s possible to view most of those sequences as cut off from the rest of the film, occupying its own special dream-scape.)

Here’s a funny thing about the scenes mentioned above: most people would agree that the music in itself is brilliant; and that skilful visual filmmaking is involved. But somehow, when both things are brought together, it is seen as loud or underlined or too obvious, hence to be frowned on. But this is the very essence of melodrama, an artistic mode that has become unfashionable today with the constant – and often thoughtless – lionising of only understated or gritty films.

A species of “liberal” commenter (caution: there will be multiple quote-marks in this sentence) also tends to go batshit about the possibility that a film might be “endorsing” the actions of a “problematic” character by using rousing background music. To this I say: so what, if we agree that the writer or director has made an honest effort to get into the mind-space of this character – to understand his or her inner world and private motivations and multiple selves, regardless of the wider ethical issues involved? 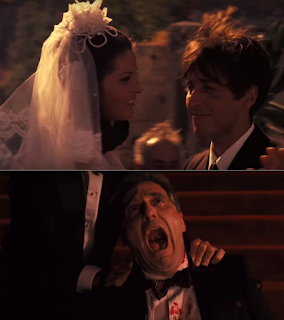 To be able to sympathize with Michael Corleone at the end of The Godfather Part III, or to feel stirred by those glimpses of his journey across three films from reticent outsider to brutal don, doesn’t mean approving of everything the character does. To feel absorbed in the beautifully scored scene in the TV series The Crown where the Queen Mother launches into a bitter monologue about how the modern royals are simply “marionettes”, puppets without any real power, or to be moved by the flashback scenes depicting Prince Philip’s childhood in boarding school, doesn’t mean that we have compromised ourselves by “supporting” an evil colonialist monarchy – it can simply mean that we have briefly related to individuals in a very specific situation; seen vestiges of humanity even in people who might in a larger sense seem over-privileged or unlikable.

And I feel that sweeping, hyper-dramatic sequences like the ones mentioned above are particularly well-placed to create that immediate thrill of recognition, of tapping into the primitive emotions that all of us share. Afterwards, of course, we can go right back to being detached and judgemental critics: looking at the film as a whole, coolly discussing its larger politics, not worrying much about the powerful little moments that had so moved us.

[My earlier First Post pieces -- on books and films -- are here]

Posted by Jabberwock at 6:07 PM