Given the controversy around Hardik Gajjar’s new film Bhavai – the original title Raavan Leela was changed after protests from our usual hordes of professional offence-takers and boycott-demanders – I went into the film wondering if it would be an irreverent, slanted take on the mainstream Ramayana; or at least something that might discomfit purists who have clear-cut ideas about good and evil, heroes and villains, in our epics. A sympathetic depiction of Raavan, perhaps – as a wise and devout king undone by hubris – or of Surpanakha as a wronged woman. 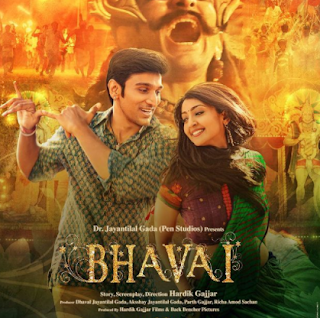 Such depictions are hardly new or radical things anyway. Children of my generation were encountering slightly watered-down versions of them even in Amar Chitra Katha comics (which are today seen by many as too conservative), and much high-profile literature and theatre across the country – along with famous studies like AK Ramanujan’s “Three Hundred Ramayanas” – has stressed the breath-taking malleability of the epics and their characters. (In a neat coincidence, I returned from the Bhavai screening to find the new book Living Ramayanas: Exploring the Plurality of the Epic in Wayanad and the World on my desk.)

Speaking just from that point of view, Bhavai is a determinedly inoffensive work, almost to the point of being a soporific – and as harmless as a Kumbhkarna who has just swallowed that soporific. It does, in its climactic section, suggest that “Ram Rajya” can become a pretext for lynching those who don’t follow societally approved paths – something that can be seen as a comment on current real-world politics – but that comes at the end of a film that mostly plays like a slow and safe TV drama.

The simple-minded plot has a drama company (or nautanki) arriving in the Gujarati village Khakhar to stage a Ram Leela, much to the delight of local boy Raja Ram Joshi (Pratik Gandhi) who harbours dreams of becoming an actor. (“Maine gehoon peesne ke liye janam nahin liya” – I’m not content with grinding wheat – he tells his disapproving father, a Panditji.) A series of random events result in this Ram playing the role of Raavan in the production, which is managed by the domineering Bhawar (Abhimanyu Singh) – and soon falling in love with Rani (Aindrita Ray), who plays Sita. But their romance is a no-no for reasons that may not be crystal clear to the viewer (it has to do with Bhawar wanting to maintain a tight control on his troupe, and with the inappropriateness of “Raavan” and “Sita” becoming involved in real life). Meanwhile, in the background, local politics is whirring away as it does: a “Vishwa Jagriti Sena” is organising rath yatras and such to spread the glory of Lord Ram (or more accurately, to use religious faith as a blindfold and secure power for itself).

The aesthetic and pace of Bhavai is often similar to those of contemporary Hindi mythological serials (Gajjar has also directed shows like Devon ke Dev… Mahadev and Siya ke Ram), starting with the opening credits in the Devanagari script, accompanied by perfectly sanskaari drawings and animation that tell the Ramayana story (and end it on a happy note with the triumphant return to Ayodhya – no tattling dhobi, no banishment for Sita). There are static reaction shots when the village audience watches the Ram Leela performance. There is romance in slow motion, complete with misty close-ups and beatific smiles and some lip-biting, and arguably more firefly metaphors and imagery than are healthy for a single film. (During an overlong conversation, both Ram and Rani compare themselves to the “jugnu” trapped with its own light in darkness, needing to fly away.) And there are attempts to manufacture dramatic tension from banal situations. (“Aaj se milna bandh,” the lovers are even told at one point.) 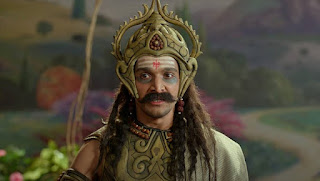 The leads are pleasant enough (though Pratik Gandhi, after his outstanding performance as Harshad Mehta in Scam 1992, deserved a better showcase) and the supporting cast – including Rajesh Sharma as Bajrangi, who plays Hanuman – acquit themselves well enough when they have something to do. The more engaging bits involve the film’s depiction of the drama troupe’s everyday routine, with gentle slapstick running through the performers’ interrelationships – and occasionally a sense of the pressures and disappointments of this life. Lachhu, played by Ankur Bhatia, is a good-natured prankster but also restless because he yearns to be “promoted” from Lakshman to Rama; the actor who does play Rama – Ankur Vikal – feels bad about being paraded about and “worshipped” but given nothing to eat or drink. (“Bhagwan bann ke galti kar di,” he mutters. In the current climate, the real Ram may well agree.)

There are also little pointers to how art and life are reflecting mirrors placed opposite each other, catching and bouncing light, offering new ways of seeing. Scenes from the Ram Leela contrast with or complement what is happening offstage: as they play Sita and Ravana, Rani and Ram can barely control their laughter when their dialogue touches on something that really happened a while earlier. When Hanuman and Vibheeshan separately warn Ravana to return Sita to her rightful place, it is played as commentary on the real-life situation. Some of this reminded me of another “Raavan Leela” film from a few years ago – Rohan Sippy’s Nautanki Saala!, in which the Ayushmann Khurana character plays Raavan in a theatre production titled Raavan Leela.

Unfortunately, much as all this is conceptually intriguing, Bhavai spells it out so explicitly (Rani and Ram even comment offstage on the double-meanings in their dialogues, just in case we missed it) that it feels like one is not being allowed to participate in the story, merely spoon-fed every detail. Too many lines in the script (“Darjee kabhi Ram nahin bann sakta hai”, “A tailor cannot become Ram”, or “Iss yug mein sabhi Raavan hain”, “Everyone is Raavan in this age”) turn out to mean much less than they might have. In the final analysis, all that handwringing and wailing about the title “Raavan Leela” may have been more interesting than the film itself.

Posted by Jabberwock at 8:40 AM