In which Steve Martin, Selena Gomez and Martin Short set out to solve "Only Murders in the Building"

Charles: “I’ll call Mabel.” (Pauses) “Or should I text?”
Oliver: (thinks about it for a second) “Calls bother them for some reason.”

This little exchange, one of many charming vignettes from the new mystery-comedy series Only Murders in the Building, takes place between Charles Haden-Savage (played by Steve Martin), a retired TV actor, and Oliver Putnam (Martin Short), a Broadway director full of wacky ideas that somehow never took off. The young woman they are trying to contact is their partner-in-investigation, Mabel (Selena Gomez) – and the “calls bother them” line is what makes the scene so droll. Because “them” refers to people of Mabel’s generation, who seem much more comfortable communicating through text messages as opposed to unsolicited calls. The two elderly men, who never had this option for the bulk of their lives, must make peace with this youthful idiosyncrasy. 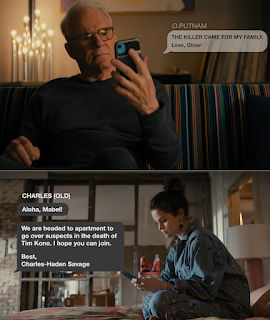 Their uncertainty about texting etiquette in general is captured in Charles’s next line:
“What sounds more casual – Dear Mabel or Greetings, Mabel?”

(He eventually opts for “Aloha Mabel.” And redundantly signs his name at the end.)

There is much to relish in Only Murders in the Building, in which the three leads are terrific as true-crime-podcast addicts who team up when a murder is committed in their big New York apartment building. But one of the things I enjoyed most was the show’s treatment of the vast generation divide between the two men and Mabel, who is more than four decades their junior.

That business of formally signing off text messages, for instance, or using all-caps for them. In one very funny sight gag, we see Charles reading a text that goes “THE KILLER CAME FOR MY FAMILY. Love, Oliver.” In another scene, Oliver is introduced – by youngsters – to a “vegan sea salt oil” flavour of ice-cream. “When did ice cream become a hand lotion?” he asks. In yet another scene, Charles and Oliver are outraged when Mabel seems not to know who the musician Sting is. (The twist is that she does know, but is having some fun at their expense. Though she then goes on to show her millennial creds by declaring that “Every Breath You Take” isn’t a love song but a stalker song.) 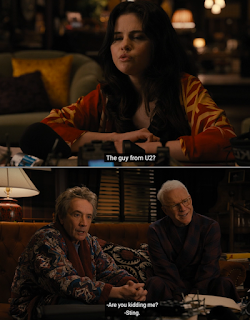 Perhaps one reason why I enjoyed this give and take is that I could, to a degree, relate with both age groups. Here lies the rub for someone like me, in his mid-forties: in terms of actual age, I am closer to Selena Gomez than to Steve Martin and Martin Short (Gomez is 29; the old fellers are in their seventies; all three characters are around the same age as the actors playing them), but that doesn’t necessarily mean much when it comes to recent technology. I didn’t grow up with smart-phones, or cellphones, or the internet for that matter (a part of me still feels like capitalizing the “I” in “internet” as we used to do in journalistic pieces in the first few years of negotiating this strange new animal), and consequently there were places where I could relate more to the awkwardness of the two men.

The setting too manages to be both modern and old-world – it’s a posh New York apartment building called the Arconia, but is also evocative of a certain sort of cosy detective story of yore: a confined setting, a relatively small cast of characters, one of whom is likely to be a murderer. While the mystery is engrossing enough in itself (and builds to a satisfying revelation, followed by another revelation, and finally a little twist at the very end), what matters more is the journey. We see three people becoming energized in different ways as they work together on solving a murder, start their own podcast, and gradually become more involved with the world around them. Charles and Oliver are well over the hill, but still enthusiastic and hopeful; Mabel is more hard-boiled and cynical in some ways; it’s a good match.

There are gradual revelations about the protagonists as the mystery deepens. The first big one is the episode 1 cliffhanger where we learn that the murdered man, Tim Kono, was one of Mabel’s closest childhood friends, one of her “Hardy Boys” – and that she has neglected to share this little detail with her new buddies. But other subtler bits of information also emerge about the characters: about Charles’s emotional reticence, for instance, and why he seems haunted by two people in Bugs Bunny and Porky Pig costumes. (Again, from the generational point of view, there is something touching about this little detail: how many youngsters of a certain age would relate to, or even know about, those two vintage comic characters?) 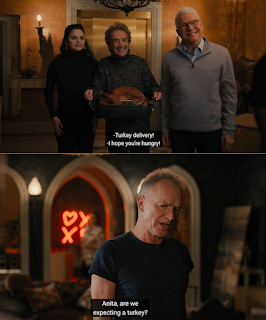 Other characters come and go, either coming under suspicion or playing detective or hindering the efforts of our central trio. An obsessive cat-lover keeps his deceased pet in his freezer. Sting shows up in a very funny subplot playing a surly version of himself as one of the building residents who briefly becomes a suspect (he becomes the subject of a "sting" operation, so to speak; later he thinks up a new song that includes the refrain “Tim Kono / Oh no”). Charles finds romance with a bassoonist (played by Amy Ryan) who wisecracks “You’ll see me around bas-sooner or later.” Nathan Lane guest-stars as Teddy, who reluctantly puts up the money for the podcast.

And then there are the meta-references or the stylistic innovations. One episode includes an appearance by some of the podcast’s die-hard fans, who camp outside the building and briefly even get to participate in the investigation. Another poignant episode is told almost entirely from the perspective of Teddy’s deaf son Theo – which means no audible dialogue, just a few background sounds and lip-reading subtitles. Compelling and unusual as this narrative device is, it also got me thinking: here is a show that centres around true-crime podcasts, with the show’s episodes corresponding with the podcast episodes that Oliver, Charles and Mabel are recording. But here is a character who can’t be part of such a world – because he can’t hear or speak – and yet he is central to the plot. It feels like an act of warmth and empathy to do this episode in this way – while also making a point about the inevitable non-inclusivity of some mediums.

Ultimately this gently funny series is about three people embracing their own messes, and finding themselves – or a version of themselves – even as they try to answer the question “Who is Tim Kono?” In one of the final scenes, in what feels like a rite of passage, Charles types out a text message, signs it “All best, Charles Haden-Savage” – but then goes back and deletes that last bit. He is learning. “As I said to Paula Abdul during our production of Hedda Gabler, we gotta think outside the box here,” Oliver says early on – one of the show’s funniest throwaway lines – but by the end, all three amateur detectives have stepped outside their private boxes. And it is great fun watching them get to that point.

Posted by Jabberwock at 8:51 AM