(One of my favourite recent discoveries on Instagram has been Rohan Chakravarty’s Green Humour page, which collects his detailed cartoons about the natural world. I reviewed his new book for Scroll)
------------------------

Despite being a hard-boiled urbanite who walks the mean streets of Delhi, I know a few mongooses – or feel like I do. The “nevlaa”, as we call him, makes an occasional appearance in and around my colony park: sauntering across a lane with a quick look around for cats or dogs or cars, standing on its hind legs for a better view – like the meerkats in Life of Pi – and even sticking its head out through a hole in the ground and staring at me and my dogs inquisitively before vanishing in a split second if the attention is returned. 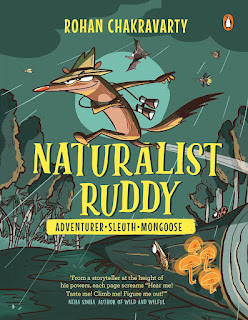 These brief but memorable visitations made it easier for me to relate to the protagonist of Rohan Chakravarty’s new graphic book Naturalist Ruddy, about the adventures of a sleuthing mongoose. Even if Ruddy is a ruddy mongoose from the Kanha National Park, not the common grey variety I know, the basic principle holds. Here is a creature that seems curious, thoughtful and well-travelled enough – and is just the right size – to make it plausible that he might roam the forests and reserves of India (even going as far as the Nicobar Islands), solving countless little mysteries of the natural world.

The book’s format is a straightforward one: thirty-nine cases that usually don’t take up more than two or three pages each. The resourceful Ruddy comes across a puzzle or mystery (mainly involving insects and birds, but occasionally larger creatures such as a black panther or a jackal) and, through observation and conjecture and sometimes with help from CCTV cameras or forensics, works it out. Why, for instance, would a group of Carpenter ants kiss a mealy bug and then walk past it instead of preying on it? What does the Mud Dauber wasp do with the bird droppings it carries away? What is with this twitchy “zombified” beetle, which moves like the undead, as if being remote-controlled by someone else? Why does a dead frog have what looks like a bullet wound (with no exit wound) below its chin? And what of the many “mimics” in nature – a spider that has evolved to look like a weaver ant, a caterpillar with a snake-like front appearance. 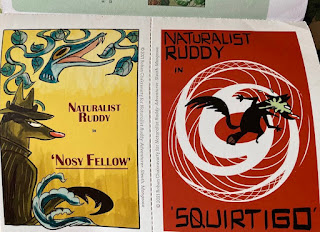 Through it all, Ruddy might be said to be mimicking a classic noir detective himself. When he takes a photo, he goes to a dark room to develop it even though he is using a digital camera, just to give the story some atmosphere. He wears a hat called “Hatson”. And though he is too health-conscious to smoke a real cigar, he pretends to smoke with a neem stick. Every once in a while the book makes a few nods to classic movie thrillers; there are also two postcards that neatly riff off famous posters of Hitchcock’s Vertigo and Polanski’s Chinatown.

Anyone who follows Chakravarty’s Instagram page Green Humour will know that it is a treasure trove of detailed and informative cartoons about the natural world, accompanied by witty commentary that often links the idiosyncrasies of non-human creatures with those of ours. The adventures of Naturalist Ruddy are as funny and easy on the eye, and there is an interactive element too: a number of single-pagers titled “Team Up with Ruddy”, where we are asked to figure out the answer to a puzzle.

And there are all those attentive, warm-hearted drawings: my personal favourites include the one of Ruddy diligently taking notes as a wailing termite shows him the remains of a destroyed mound; or watching in astonishment (with a Feluda book in his hand!) as a butterfly casually flies out of an ant’s nest; or chomping on a crispy crab during a vacation while a mysterious jet of water knocks his hat off. 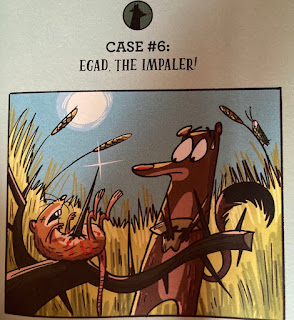 All this may suggest that Naturalist Ruddy is suited to young readers. In my view it is, but it’s probably best to be cautioned that there is plenty of violence (and some sex) in these pages. A mouse savagely impaled on an acacia thorn, a family of massacred jungle quails, a paralysed spider being eaten alive from the inside out, moths mummified in silky threads, amputated legs scattered around – these could be scenes from the gorgeously shot serial-killer “designs” in the TV show Hannibal. Elsewhere, Ruddy takes photos of an adulterous bird as it cheats on its spouse, and a bee copulates enthusiastically with an orchid.

But the gruesome content is a matter-of-fact reminder that nature can be unfathomably cruel, that enormous suffering occurs across the many hierarchies of the predator-prey relationship. And so, it makes sense that Ruddy isn’t the sort of detective who will dispense “justice” or play saviour if it means disrupting nature’s balance. A spider has used deception to ensnare an ant? Well, so be it. After solving the mystery of who murdered that impaled mouse, Ruddy doesn’t produce handcuffs; he sets off cheerfully with contemplations of having a snake barbecue of his own. (Imagine Miss Marple, having solved a poisoning case, getting the idea to kill a few people with that same coniine extract.) 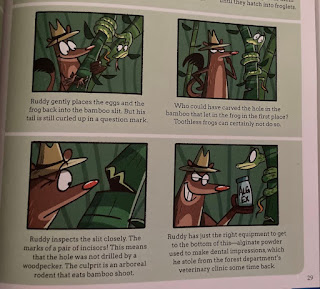 The closest this detective comes to playing “tough” with suspects is in an amusing passage where he makes a dental impression from a cut in a bamboo stem, and then holds down different rodents to see whose teeth is the right fit. But even here the goal isn’t punishment, it is simply the satisfying of curiosity. While there may not be justice here (the way we humans define it), there is a boundless sense of wonder – a view of the awe-inspiring versatility of nature as well as the many horrific things in it.

If I had to gripe about anything, it would be that storytelling fluidity sometimes takes a back-seat to the need to provide information – and that a few of Ruddy’s smart-aleck observations at the end of a case wear thin. (The punch-lines in Chakravarty’s other cartoons tend to be sharper.) But so fascinating is the information in itself, and so pleasing the drawings, that this is never a big problem.

Naturalist Ruddy ends with a goofy scene where Ruddy must turn his magnifying lens on himself. Funny as the moment is, I also felt it was thematically apt, since it amounts to telling the reader: we mustn’t only think of ourselves as detached observers – we are all participants in this mad carnival (or complicit, to use the language of the detective story). “These creatures and scenes of intrigue are all around us,” Chakravarty writes in a short Introduction where he mentions the gradual development of his interest in microhabitats, “but first, we must don the detective hat and set about on our own little adventures, turning leaves and pebbles over, picking up twigs and digging up some mud.” He is right, of course. Idealistic though this sounds, the world might be a marginally better place if more people encouraged their children to look closely at the life forms around them (including the obscure or distant ones), and to see that there is so much more to engage with than the things we humans have prioritised for ourselves. This book – along with Chakravarty’s other work – is a super way of making that acquaintance.

Posted by Jabberwock at 7:19 PM