The principles of Dadaism: on movie-stars and their grandchildren

(Did this for the Sunday Economic Times)

You know how it sometimes happens, while consuming news or watching films or reading, that you encounter a specific theme – and the next thing you know, you’re seeing a version of it wherever you look? I experienced this recently with the topic of movie stars and their grandchildren (who are also movie stars, or celebrities by association).

First, Google news decided to show me a clickbait headline about Amitabh Bachchan’s granddaughter Navya and Javed Jaffrey’s son Meezaan. Normally I would have scrolled on, but as soon as I saw this I entered daydream mode (if I were in an old TV comedy, you’d see me staring vacantly into space followed by an animated visual of concentric circles) and found myself in the Soorma Bhopali scene from Sholay. Why, you ask? Because the scene has Jagdeep (grandfather of Meezaan) in the same frame as Bachchan. (Dharmendra, whose grandson also recently entered films, is there too. Looked at today, you could say the scene – in which Veeru and Jai bully poor Soorma – involves two varieties of dada-giri.)

Anyway, a chain of associations had begun. While putting together notes for a class on Hindi-film song sequences, I revisited a scene from Jagga Jasoos where the stuttering protagonist, played by Ranbir Kapoor, confesses that he needs to sing the things he wants to say, so that it “comes out smooth”. (“Mere words bhi so-so ke nikalte hain / Isliye gaa ke bolta hon takay, you know, smooth ho jaaye,” he sings.) It’s a sweet moment in an often-enchanting film, but the circles began dancing again and I was in the 1959 Anari, where Ranbir’s grandfather Raj Kapoor is finding it hard to express his feelings to Nutan in dry prose; she asks him to sing instead, providing the cue for the song “Dil ki Nazar Se”.

It felt like these two scenes, in unrelated films, were calling out to each other across the decades. Which is not to insist that the makers of Jagga Jasoos were trying to involve Ranbir in a homage to his granddad – but it’s a reminder that such connections come easily when you’re a nerd who watches a broad spectrum of movies, and when the history of mainstream cinema is packed with generations of performers from a number of clans.

I’m not concerned here with hand-wringing conversations about the ethics of nepotism, but with what effect this legacy has on us as viewers, and on the actors who perform it. Though cinema is a relatively young form, it is self-obsessed enough that films about filmmaking were already being made decades ago. Last month saw the 50th anniversary of one of the best-known, Hrishikesh Mukherjee’s Guddi, with a protagonist who travels to Bombay, meets many real-life stars, and watches the shoots of actual films being made at the time. But 1971 was also the year of another self-referential film that was about movie stars without explicitly being about movie stars: an indulgent but poignant Kapoor family project with Prithviraj, Raj and Randhir as three generations of a family. 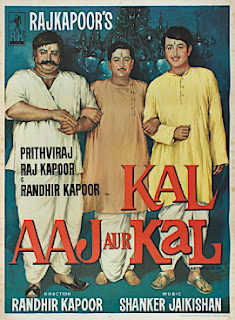 The characters in Kal Aaj aur Kal were fictional, and the plot very formulaic, but it drew on the actors’ screen personas – and on viewers’ perceptions of what they might be like in real life. So here is Prithviraj as the stern but sentimental grand-patriarch harrumphing away at his grandson (this could be an older Emperor Akbar roaring at a nightclub-going Salim), and there is Randhir as the brash and impatient “modern” boy (much as the actor himself was a youth idol for viewers who jived to songs like “Saamne yeh kaun aaya”). And here, caught in the middle, is the martyred Raj Kapoor, standing at the centre of the mansion’s enormous staircase, arms spread out like a sad joker. The film even ends with the arrival of a fourth generation (birthed by Babita), and a mystical suggestion that the grandfather has been reincarnated and the circle of life – via a new “kal, aaj aur kal” – will continue. (Real life obliged, though not so neatly: Prithviraj Kapoor died a few months after the film came out, and Karisma was born two years later.)

There is obvious sentimentalism built into a film where an ageing performer shares screen space with his real-life grandchild, but another sort of hagiographic peril lies in a scenario where a contemporary star might play his own (long-deceased) grandfather. Fine actor as Ranbir Kapoor is, I’m not sure I’d look forward to a film that cast him as Raj Kapoor. (Sanju, in which he only played Sanjay Dutt, was already reverential enough towards its subject.) But it seems likely that we will be treated to such sights at some point, given that cinema – both internationally and now increasingly in India – has been mining its own history with relish. 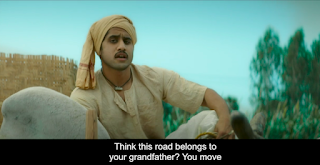 Here, as in other areas, one can expect competition between the northern and southern film industries. The 2018 Telugu film Mahanati, a fine biography of the actress Savitri, had a fun little scene where Naga Chaitanya played his own grandpa, the legendary Akkineni Nageswara Rao, and spoke the dialogue “Think this road belongs to your grandfather?” when accosted by a honking car – a nudge-wink moment in an otherwise matter-of-fact portrayal. Just as tellingly, Mahanati depicts Prithviraj Kapoor in a very short scene, but the actor they picked looks nothing at all like the Prithviraj of the period, or like any other Kapoor for that matter. Clearly they didn’t want the casting to be influenced by big bad Bollywood.

Posted by Jabberwock at 7:58 AM