Last Night in Soho: a film about monsters in the Swinging Sixties 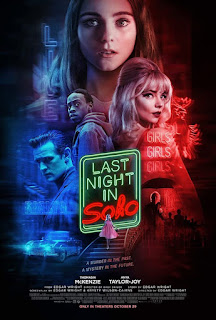 “The past is a foreign country,” goes the famous opening of LP Hartley’s novel The Go-Between, “They do things differently there.” These lines could serve as a very generalised epigraph for Edgar Wright’s new film Last Night in Soho, though the following might be more suitable: The past is a monster that doubles up as your security blanket, providing warmth and reassurance before smothering you in its labyrinthine folds.

Last Night in Soho starts off very promisingly, maintains that promise till past the midway mark – and then goes somewhat bonkers in its second half. But disappointed as I was by how the film ended up, I never stopped feeling a connect with the state of mind of its protagonist: a young woman named Eloise (or Ellie) who lives in the present day but idealises and yearns for a bygone period that she never experienced firsthand: in this case, the London of the Swinging Sixties.

Shortly after moving from rural Cornwall to London for a fashion-design course, Ellie – who, we gather, has the “gift” of seeing things, including the spirit of her long-dead mother – begins to have dream-visions of the mid-1960s where she becomes a sort of doppelganger to a young woman named Sandie, an aspiring singer. As Ellie moves between her own contemporary life (slowly gaining confidence despite the bullying of city-bred classmates) and participating invisibly in the past world (populated by theatres showing films like Thunderball and Darling, and nightclubs where Cilla Black and Petula Clark perform), she is privy to the gradual shattering of Sandie’s dreams. The visions become darker, she gets increasingly concerned about her new “friend”, uncertain about who or what to believe. 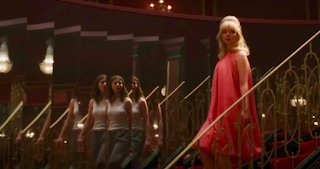 All this places the film in the fantasy-cum-psychological-horror genre, and it is hit and miss in this regard, with a couple of tonal shifts that won’t be to all tastes – though some of the dreamscapes created by Wright and cinematographer Chung Chung-hoon are vivid and unsettling, as subtly creepy encounters yield to full-blown horror. (Some night-time scenes play like tributes to Dario Argento. A parade of the ghosts of predatory men, their features indistinct, faces appearing to melt, is evocative of the famous “Return of the Dead” sequence from Abel Gance’s silent film J’Accuse, though it could just as easily have come from a modern slasher film.)

However, I was more interested in the film’s treatment of nostalgia and the use of time travel (real or imagined) as a therapeutic tool. Perhaps because I could relate to Ellie, a misfit who says things like “If I could live anywhere in any time, it would be 1960s London” and gets puzzled looks from classmates when she completes a reference to “Kylie” with “Minogue”. (Even the 1980s/90s star feels like a relic now compared to the much more contemporary Kylie Jenner!) She uses old music as a cocoon that enables her to shut out her immediate surroundings – to the degree that she almost misses her first class because, lulled by the music, she over-sleeps.

Watching these scenes, I was reminded of a conversation with a much older colleague when I was in my first job. I was in my early twenties, she was in her fifties, and we were at a copy-desk together, tracking changes on a cinema-related article. Gathering that I was somewhat into “old cinema”, she started talking about mid-1960s films, and about actresses like Jane Fonda, Julie Christie and Audrey Hepburn. After going on for a while, she laughed self-consciously. "Why am I saying all this to you?" she said. "It's so far before your time."

“Actually,” I replied, “the reason I’m being quiet is that Jane Fonda is way after my time – though I know everything there is to know about her dad’s career. Also, my preferred Hepburn is Katharine, who predates the other one by around 20 years.” Then as always, I was in my 1930s and 1940s Hollywood phase. When I was much younger and even more precociously intolerable, I had annoyed a visiting aunt by interrupting her proclamations about old films (high on her own version of nostalgia, she claimed among other things that Audrey had won an Oscar for My Fair Lady, and didn’t take kindly to being corrected – “no aunty, she wasn’t even nominated” – by a 14-year-old).

This is a long-winded way of saying that I know what it’s like to be a freak who constantly fantasises about being transported to another time and place – say, a place where your favourite films were being created. I can imagine gliding, mouth agape, from one studio lot to another in the 1940s or 1950s, watching iconic scenes being performed for the first time, or the playing out of personality conflicts that derailed or strengthened film history. Or watching the first Live performance of a soon-to-be-legendary song from a major album. Or just feeling a strong desire to visit the period when your own parents were growing up, to get a sense of the texture of that world and how it shaped their personalities and lives.

Though Last Night in Soho is broadly speaking psychological horror, it has kindred spirits in other genres – in Woody Allen’s delightful Midnight in Paris, for instance, where an American writer visiting Paris finds himself back in the 1920s, rubbing shoulders with Salvador Dali and Gertrude Stein and F Scott Fitzgerald . (That film was different in tone from Last Night in Soho, but it also slyly warned of the pitfalls of idealising the past, or of thinking of a specific period as a “golden age”.) I also thought of Stephen King’s novel 11.22.63, which was on the one hand an intense nostalgia exercise with its plot where a teacher goes back in time to the Eisenhower era, the period of King’s own adolescence – but also a sharp caution about the not so savoury aspects of the past (with one vivid scene involving a clump of poison ivy near a ramshackle toilet for “Coloured” people in the segregation era). 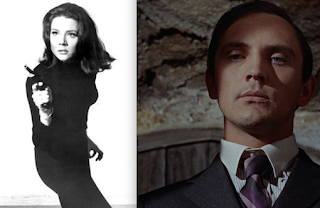 Last Night in Soho also has a self-referential side, in its casting of the veteran actors Diana Rigg (who died last year, after the film was completed; it is dedicated to her) and Terence Stamp. Both were an important part of the British pop-cultural landscape of the swinging 60s: Rigg became a star in that decade with her iconic role as Emma Peel in the TV series The Avengers, and by playing arguably the first “Bond girl” of real substance, in On Her Majesty’s Secret Service; Stamp, though best known to my generation for playing Superman’s arch-enemy General Zod, was genuinely sinister in the 60s in such films as The Collector and Spirits of the Dead. In a sense, these actors – or their youthful versions – are as much ghosts of that decade as the spirits in this narrative are. Wright’s film knows this, and uses their wrinkled faces and still-striking personalities to good effect. (Minor spoiler alert) The film also derives some tension from a similarity in features between the octogenarians and the much younger actors Anya Taylor-Joy and Matt Smith.

In any case, one immediate effect of this film for me was that it made me want to re-watch a few 1960s films starring Rigg and Stamp (and Rita Tushingham, who is also here, in a more peripheral role as Ellie’s grandmother). The past, as LP Hartley didn’t say, can turn out to be a dangerous country – too much nostalgia can cloud one’s vision, there is peril in living somewhere other than the present – but for many of us it is an irresistible lure. “Do you have any plans tonight?” a nice young man in the present day asks Ellie shortly after she has returned from her first time-traveling excursion. She is tempted to go out with him, but then faces from the previous night’s adventure encroach into her mind, beckoning her back to them for some old-world fun and games, and she realises that she does have somewhere better to be. Or so she thinks.

[My earlier First Post pieces are here. Related post: on Danny Boyle's Yesterday, about a world in which the Beatles never existed]

Posted by Jabberwock at 8:49 PM