(I have been doing some very small – barely 300 words or so – reviews for Reader’s Digest in recent months. Not my preferred writing format, but it does sometimes feel like a nice throwback to my first journalistic stint 20 years ago. Am putting some of these reviews here in this combined post)

In a small town, an autorickshaw driver named Veera finds a big video camera that someone accidentally left in his vehicle. With the help of his friend Gana, he sets about trying to make a film himself. Who knows, it might become a pan-India hit and fetch lakhs of rupees? 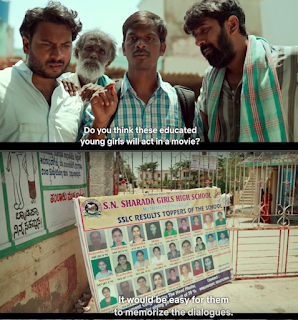 The charming new film Cinema Bandi probably derives its inspiration from the fact that in recent years, thanks to mobile-phone technology and apps like Tik Tok, it has become possible for underprivileged people to become “filmmakers” themselves – often displaying commendable levels of creativity as they work within constraints and learn on the job. In this case, the plot begins with unexpected access to an expensive device, and the endeavour becomes more complicated with the hunt for a suitable crew (including a girl who sneaks away on college time because her father won’t let her act). But slowly they figure out the vagaries of shot-taking, continuity and costume. Everyone is infected by the project – in one scene Veera and his wife even behave a little “filmi” when they quarrel. One is reminded that much of human behaviour and self-perception over the past century has been influenced by the tropes that we have been exposed to as movie-goers.

Fittingly, this tribute to small filmmaking is itself a small, low-budget film – one where the actors are first-timers (only a little more polished than the hired-on-the-fly “actors” within the narrative). This means that you have to be a little patient with Cinema Bandi, tolerant of its rawer moments, a couple of cliches, and the over-earnestness of some of the storytelling. Ultimately, though, its sincerity and gentle humour carry the day.

And in one of the wittier touches, the “writer” of the amateur movie is an old man who is always around for the shoot, but quiet, passive and summarily overshadowed by what is going on around him. He does get to speak the film’s hilarious last line, though.

Chaitanya Tamhane’s lovely tribute to the world of Indian classical music – and its many forgotten practitioners – could just as well have been titled “Discipline”. This is the quality that Sharad (Aditya Modak) has to organise his life around, and we witness both his patience and his frustrations as he comes to term with the possibility that he might never find a proper foothold in the world he loves. Is he even good enough, as a singer or as a student?

Slow-paced as The Disciple might seem, it becomes a hypnotic experience as you get invested in the central character and his journey. The narrative moves around in time, giving us glimpses of Sharad’s childhood as well as the present day, where he tries to draw succour from audio recordings of talks by a long-deceased teacher named Maai (voiced by the late Sumitra Bhave). Tamhane’s long takes and almost-static shots – also a characteristic of his earlier feature Court – work wonderfully for this subject matter: in the musical performances, the camera sometimes moves only very slightly forward, as if mindful of intruding on the performers’ space. Throughout, one is aware of the contrast between this deliberate, measured pace of life – and the patience required for it – and how the world moves elsewhere.

The Disciple is driven by its attention to detail and its many little vignettes – such as the mildly chastened look on Sharad’s face when his guru tells him, mid-performance and in front of a seated audience, “No, you aren’t listening … sing with an open throat.” Or the plaintive scene where he goes to donate recordings of Maai’s voice to an archive that doesn’t seem to care much. Or the very slow escalating to hostilities when the mother of one of his students comes to him asking that her boy be allowed to take time off to perform with a “fusion” band. It is a story about the relationship between art and artists, as well as a lament for things that have come to be seen as elitist, outdated or both.

To understand the breadth of the current Malayalam cinema – responsible for perhaps the most vibrant filmmaking in the country today – consider the last two collaborations between writer-director Mahesh Narayanan and actor Fahadh Faasil. In 2020, with pandemic-generated restrictions on conventional filmmaking, they made the low-budget, experimental “computer screen film” C U Soon, a story told through video calls and online chats, and needing only very basic real-world sets (Faasil offered the use of his own flat).

Their latest, Malik, on the other hand, is a big-canvas gangster film spanning five decades, with a large cast of characters. It begins with a very long, single-take sequence that introduces us to the household of the aging Sulaiman or “Ali Ikka” (Faasil) as he prepares to leave for a Hajj pilgrimage. He is arrested, though, and plans are made to get him killed in prison. This provides the framework for flashbacks – narrated by different characters – that detail the rise to power of a man who becomes a hero in the Ramadapally region. Though Sulaiman, a Muslim, falls in love with and marries a Christian girl Roslyn (Nimisha Sajayan), he also finds himself caught in communal tensions exploited by politicians and police – leading to a parting of ways with his brother-in-law David (Vinay Fortt).

While being about the politics of a specific area, Malik draws on some templates and character types that have been genre staples since The Godfather (some scenes also feel like a homage to Mani Ratnam’s Nayagan). Accordingly, crime-movie aficionados might find it over-familiar at times. But watched on its own terms – and without comparing it to the very best that Malayalam cinema has recently given us – this is a solid, well-acted film with a sense of the broad sweep of history and of the small, intimate moments which forge that history.

Posted by Jabberwock at 9:42 AM