(In my First Post column about opening sequences, Ray’s marvelous film Joi Baba Felunath, which is a detective story as well as a critique of pious hypocrites)
---------------- 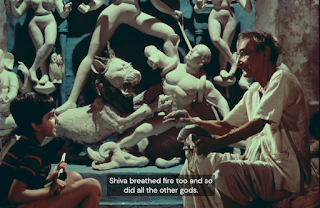 A statue-maker is telling mythological stories to a boy: about the creation of the goddess Durga so that the demon Mahishasura might be vanquished; about the various mounts used by the Gods – a tiger for Durga, a rat for Ganesha, and so on. “Is all this true?” asks little Ruku, the doubtful look on his face emphasized by his gum-chewing (a detail that will work its way into the plot later).

“It must be true, since the old sages say so,” replies the sculptor.

“The buffalo demon is real,” mulls the child, “The monkey god is real. So are Captain Spark and Tarzan.” Comic-book superheroes and “official” Gods belong in the same tier of worship-worthiness.

But the conversation is interrupted, because someone has arrived in a car that has drawn up to the house in the dark, dark night. This isn’t the Mahishasura of legend but a contemporary villain – an unscrupulous businessman named Maganlal Meghraj, who covets a diamond-studded idol belonging to Ruku’s family.

Thus begins Satyajit Ray’s Joi Baba Felunath (English title: The Elephant God), the second of his films about the adventures of the detective Feluda (played by Soumitra Chatterjee). The opening credits have rolled (they appeared over a series of beautiful scrolls depicting religious rituals and stories across a map of Kashi) and now we are in the narrative proper, set in modern-day Benares. The devious Maganlal (Utpal Dutt), this film’s embodiment of the idea that criminals often make ostentatious shows

of piety, shows up and proclaims that he wants the family heirloom – and shortly afterwards, the idol is stolen. Meanwhile Feluda has arrived for a holiday with his cousin Topshe and the mystery-writer Jatayu. Naturally he finds himself on the case, and the film settles into being an engrossing, good-natured detective story.

And as a set-up for all this is that little exchange in the first scene, where a child shows forthrightness about things that adults are often evasive about.

“Kids get crazy ideas from these books,” Ruku’s father complains in a later scene, trying to dissuade the boy from wasting time on superhero fantasies. But that opening scene is a reminder that kids (and the adults that those kids turn into) can get crazy and dangerous ideas from religious stories too – especially if they treat them as the infallible truth.

In fact, one reason why I enjoyed this scene – and identified with Ruku – is that in my own childhood, saturated with Amar Chitra Katha comics, I became besotted with the god Shiva – as a super-cool superhero, not as a divinity. And I would get annoyed with family elders who approvingly referred to my Shiva-love in terms of “bhakti” or religious devotion. Their keenness to have me in the fold as a true believer might have seemed harmless at the time, but years and decades later, in other conversations and proclamations by those same aunts and uncles, I would see the nastier aspects of that religiosity play out. 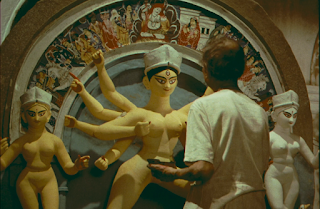 In the Joi Baba Felunath opening sequence, we also get our first view of something that will become a running motif in the film: the yet-to-be-painted statue of the goddess Durga, far from finished but already arranged in her characteristic pose, looming over the supine demon. Dare one say it, especially given that this is a film for young viewers, there is something crude and unseemly about these visuals. When you see a Durga statue in full finery, painted, clothed, trident in hand, astride her lion, the impression is one of grandeur and awe. But see the same figure as a blank slate, legs splayed suggestively, and you have something very different. Bereft of paint and accoutrements, she is nothing more than an unclothed Barbie doll or a mannequin. This harks back to the opening-credits sequence of Ray’s 1960 film Devi, which showed a statue’s unadorned face gradually transforming into the goddess through the addition of makeup, jewellery and hair.

Given Ray’s own scepticism about religion – or at least religious rituals – and his concerns about the perils of unquestioning faith, it’s no surprise that over the course of Joi Baba Felunath he gives us these matter-of-fact reminders of what Gods look like naked.

A few years earlier Ray’s first Feluda film, Sonar Kella, had also opened with a nighttime scene involving a little boy – Mukul, whose memories of a past life in a golden fortress somewhere in Rajasthan set the plot’s wheels turning. The tones and assumptions of the two scenes are very different: while Feluda’s detection methods may be logical and precise, Sonar Kella in its denouement is not a “rational” film– it allows for the likelihood that Mukul really does remember details of his previous life. And that opening scene is imbued with a sense of otherworldly mystery created by the child looking through the drawings he has made. In the stories he wrote, Satyajit Ray wasn’t averse to the supernatural or para-normal. 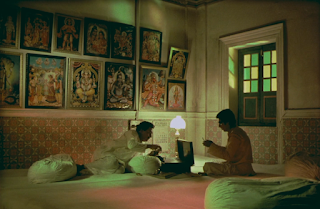 But the opening scene in Joi Baba Felunath is like a counterpoint to the Sonar Kella one: here, the child is questioning, doubtful about the fantastic stories he is hearing. And it sets a different sort of narrative in motion – one that is about debunking religious pretences and hypocrisies. We see this elsewhere in the film’s visual scheme – for instance, in the elaborate religious iconography decorating the walls of Maganlal’s den, a space where underhanded transactions are also carried out.

In superficial terms, Joi Baba Felunath takes the form of a cosy detective tale with warm, familiar characters as well as sinister antagonists: there is a theft, and an investigation around it. But being set as it is in Benares, with its many shots of temples in labyrinthine lanes, there is a more metaphysical quality to this film just

below its surface: it plays out almost like an investigation into the nature of blind faith and idolatry. Consider the probing camera movements in a scene where Feluda moves from the imposing exteriors of the ancient city into a space occupied by a “holy man” who is known as Machli Baba, and sees various items lying around his room – including the wig and the other disguises this unremarkable-looking fellow dons to appear grand and magisterial. Or the vividly shot nighttime scene where a freshly stabbed man stumbles through a narrow lane, with the “holy” city impervious to his plight.

And yet, as this film suggests, there are other forms of (more personal, more individualistic) worship too, and other types of temples. The old man, meticulously painting the statue over many days, is an artist for whom doing his work well is as much an act of devotion as the feelings that will be generated by the finished idol. The bodybuilder with 17-and-a-half-inch biceps who shares a guesthouse room with Feluda and friends thinks of his body as a holy space and as a work of art comparable to Michelangelo’s David.

And of course there is little Ruku with his firm belief that the superhero Captain Spark can protect even kidnapped Gods. He turns out to be right, too.

[Earlier First Post columns here. And here is an essay I wrote about Satyajit Ray as rationalist and fabulist]