On Mahanati, Maya Bazar and a “replica scene”

Anyone who has spoken with me at any length about cinema recently will know about my deep love for the 1957 Telugu classic Maya Bazar (it’s a film that made more than one appearance in the Mahabharata course last year; if we had had enough time, Karthika Nair and I would happily have shown multiple scenes from it just because we wanted to re-watch them). I have also crushed on Savitri’s performance as Sasirekha (Vatsala in the Tamil version which was shot simultaneously) – both she and Maya Bazar were icons of Telugu/Tamil cinema for decades, but they weren’t part of my cultural education while I was growing up, and I discovered them relatively late.
A couple of days ago I got around to watching the 2018 Mahanati, a dramatisation of Savitri’s life, with Keerthy Suresh in the lead and Dulquer Salmaan as Gemini Ganesan. I liked the film a lot – though there must be many nuances that I missed, and I’m not really in a position to say how “authentic” the narrative is. *** 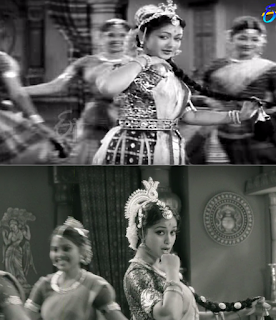 There was one thing I felt ambivalent about: the recreation of a couple of iconic moments from Maya Bazar, especially the brilliant “Aha Naa Pellanta” song sequence. This is an author-backed scene that Savitri had really sunk her teeth into, as she shifted between Sasirekha’s dainty gestures and Ghatotkacha’s manspreading (rakshasaspreading?) ones. (Context: Ghatotkacha, disguised as Sasirekha, is trying to maintain the appearance of a young woman singing about her upcoming nuptials.)
This being among my favourite scenes in Maya Bazar, I enjoyed that Mahanati had paid a full-fledged tribute to it. But I couldn’t help wondering if it was the right decision from an actor’s point of view. For most of Mahanati, Keerthy Suresh is very good as Savitri (or rather, as the Savitri constructed by the film) – but in a studiously recreated scene like this, she is required to be more mimic than actor. In the original Maya Bazar scene, Savitri had the freedom to build her mannerisms and gestures from the inside-out, and it came across as joyful and spontaneous; the Mahanati version feels more schematic; one is uncomfortably aware that Keerthy has the onus of faithfully copying Savitri’s legendary act. And game though she is, if you have the original scene at hand and you know that the new scene 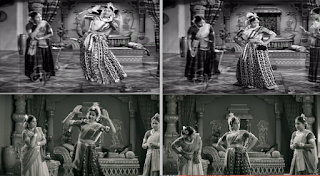 is meant to be a facsimile, a few little things won’t seem right: in a movement here, or an expression there, Keerthy comes across as more cerebral, more controlled than Savitri did in the original. (It was just a teeny bit like watching Sridevi dance to “Jumma Chumma” at that 1990 Wembley concert and thinking how different it was from the uninhibited energy of Kimi Katkar’s performance in the original.)
It also struck me while watching this Mahanati scene that though so many films have been made about the making of earlier films (especially in the past two or three decades when cinema has been mining its own history with relish), it is still rare to see a recreation of this sort. The wiser move seems to be to try to capture the spirit or general tone of a character/scene rather than to do a straight imitation with the exact same camera angles and set design. 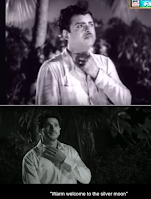 There are a couple of other such recreations in Mahanati itself – such as the wonderfully goofy moment in the “Vaarayo Vennilave” song from the 1955 film Missiamma where Gemini Ganesan is about to start singing the next stanza but clutches his throat, bemused, when a woman’s voice seems to emerge from it. (Savitri, standing behind him, has taken over the singing.) Mahanati’s recreation of that scene worked a little better for me, even though (or perhaps because) Dulquer Salmaan doesn’t look very much like Gemini Ganesan. Or maybe it worked because there are fewer layers involved here. In “Aha Naa Pellanta”, Savitri wasn’t just playing a singing princess, she was playing Ghatotkacha pretending to be Sasirekha and slipping in and out of character: this is a performance within a performance; an actor who does brilliantly in such a role tends to get canonised for all time, and no imitation can ever match it. 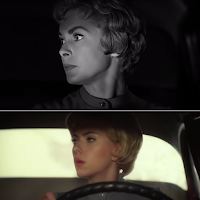 In the event that anyone is still reading this post: any thoughts about other cinematic recreations of this sort (in Indian or non-Indian films) and whether or not they have worked? I’m finding it surprisingly difficult – offhand the only one I can think of just now is from the 2012 film Hitchcock, with Scarlet Johansson as Janet Leigh as Marion Crane driving the car early in Psycho. But as I recall it, that was a fleeting moment.
*** P.S. About authenticity in the Mahanati narrative. One thing I realised was off: the film’s implication that Gemini Ganesan was so wholeheartedly in love with Savitri that at least for the first few years of their marriage his attention was focused completely on her. In reality, Gemini’s extra-marital relationship with Pushpavalli was very much in high tide around the same time that he married Savitri in 1952: Gemini and Pushpavalli’s daughter, later famous as the actress Rekha, was born in October 1954.

P.P.S. here is another fun little moment in Mahanati, where the dialogue (which you can see in the subtitle) feels like an inside joke. Because this is Naga Chaitanya playing his own grandfather, the legendary Akkineni Nageswara Rao (ANR).
(ANR was one of the superstars of Telugu cinema, but until a few years ago I knew nothing about him. Back then, the only way the inside reference in this scene would have made sense to me was if someone had told me that Nagarjuna’s son is playing Nagarjuna’s father.)

Amusingly, Mahanati has at least one other moment that would have allowed a popular current actor to appear in a cameo as his own *great-grandfather*. The film depicts Prithviraj Kapoor in a brief scene where he gives the young Savitri a citation after watching a dance performance. Weirdly, the actor they picked looks nothing at all like the Prithviraj Kapoor of the late 40s/early 50s when the scene is set. If resemblance wasn’t going to be a factor, they may as well have bunged Ranbir Kapoor into the part. It could lead to a few dissertations with subheads like “The dialectics of intercultural nepotism in Mahanati”.
[A post about Maya Bazar is here]
Posted by Jabberwock at 8:47 PM