Nostalgia post: on a Prakash Mehra-Bachchan audiocassette (and listening to films before watching them)

I have held on to a lot of memorabilia from the deep past – diaries, video recordings, newspaper clips – but there is one item, a treasured childhood audio-cassette, that I wish I still had with me. All the more so because even in the internet age, where you’d think it would be possible to get information about something like this (it was an HMV release and featured many high-profile Hindi-film songs), I haven’t been able to find anything. 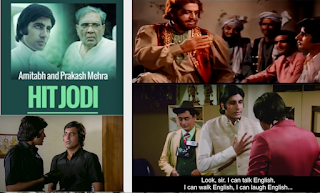 Which means the picture on the top left here is only a representative one, the closest I could locate online to the image I have held in my mind for decades: the cassette cover, which had a photo of the director Prakash Mehra (looking much younger than he looks in this “Hit Jodi” picture) alongside one of Amitabh Bachchan, each man in a separate square box.
Most of my favourite audio-tapes of the early 80s (including one that was a Naseeb/Amar Akbar Anthony combination) had busy, colourful covers featuring the most popular stars – so it was strange to see this uncluttered cover, with a melancholy-looking Bachchan (probably from Muqaddar ka Sikandar) sharing space with a chubby man who was unlikely to be recognised by a casual movie viewer. (I definitely didn’t know who Prakash Mehra was when I first laid eyes on the cassette – I may have thought he was a playback singer like Kishore Kumar or Mohammed Rafi.)
The tape was a collection of songs and dialogues from the films the two men did together, starting with the 1973 Zanjeer and continuing till the 1982 Namak Halaal. (Sharaabi, which came out in 1984, wasn’t included – the cassette pre-dated that film.) I spent a great deal of time listening to the songs, but also to the fragments of dialogue – the famous comic scene in Namak Halaal, for instance, with AB in a monologue about Wasim Bari and Wasim Raja and Vijay Merchant and Vijay Hazare and English being a very phunny language.
One of my sheepish confessions as a movie buff is that I’m almost sure I heard most of the dialogue track of Sholay (on its famous double cassette) before I watched the film in its entirety. This was also the case with the films on the Bachchan-Mehra tape; it's likely that the first few times I listened to this cassette, I hadn’t watched any of the films in it. So I would try to piece together the stories of the films from the dialogues, and more often than not end up lost or confused. Some conjecturing was required, maybe some detective work too. When I heard “Yaari Hai Imaan Mera” from Zanjeer, it felt weird because the male playback voice didn’t sound like it could be for Amitabh – but when I heard part of the dialogue track on the same cassette (a confrontation between AB’s Vijay and Pran’s Sher Singh), I realised that Sher Khan must be doing the onscreen singing (Manna Dey got the voice just right). Similarly, having read in magazines about the 1970s rivalry between Bachchan and Vinod Khanna, I was curious about the storylines of Hera Pheri and Khoon Pasina, both of which featured on this cassette (Khoon Pasina was produced by Prakash Mehra, not directed by him). From the few dialogues available on the tape, I couldn’t for the life of me tell whether the AB and VK characters were friends or enemies in Hera Pheri, and this added to my curiosity about the film (and hastened the process of seeking it out to watch).
And then there were the pain-soaked dialogues from Muqaddar ka Sikandar, including Bachchan’s references to Raakhee as “memsaab”, which became a motif in the film (in the same way that the more sarcastically uttered “sakhi” was a running thread in Bemisaal years later, with the same two actors). I remember being both intrigued and irritated by that repeated word “memsaab” – how did it fit if this was a romantic relationship? – and again, I had to wait to watch the film to make some sense of it.

But something else from Muqaddar ka Sikandar became my favourite thing on the album: I grew to love “O Saathi Re” so much (I think the cassette had only the male version of the song) that for the first and last time in my life, aged 7 or 8, I made an effort to record my warbling, with the aid of a double-deck tape recorder. First I would play a couple of lines from the Mehra-Bachchan cassette in one deck, to grasp the words and the tune; then I would quickly switch it off and record myself on an empty cassette in the other deck. (I don’t remember any more about this, I was probably very unimpressed with the recording and deleted it quickly, and thus ended my singing career.)
P.S. another song I really loved – the very first one on the cassette – puzzled me by its inclusion, because it wasn’t from a Bachchan film: “Chale Thhey Saath Milke” from Haseeena Maan Jaayegi, which Mehra had directed in 1968. At first I thought its inclusion was a mistake. Then I saw that the track listing had described this song as the “mukhda” for the album, but I had no idea what that meant: it was only later that I figured the lyrics were meant as a refrain, a tribute to the Mehra-Bachchan relationship, their “chalenge saath milkar” which spanned a decade’s worth of very popular films – and would eventually last till Jaadugar in the late 80s, a film that mercifully fell way outside the ambit of this collection. (I’m not sure I could have felt the same mushy affection for this audio-cassette if it had included that classic about an excited c̶o̶c̶k̶ rooster, “Padosan apni murgi ko rakhna sambhaal/ mera murga hua hai deewaana”.) 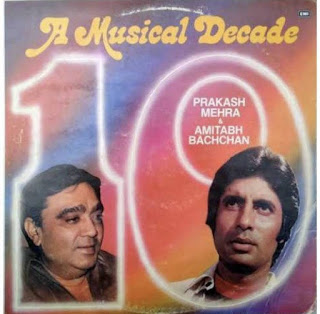 UPDATE: the excellent Yasir Abbasi has located a version of the album I remembered. I'm almost sure that the cover of the tape I had (as opposed to the vinyl cover you see here) was less colourful, but this is definitely the same album. (Or an updated version, since it has Sharaabi on it and doesn't have Khoon Pasina.)
Also, the title "A Musical Decade" stirred another memory: I had to ask my mother what "decade" meant because it was the first time I had come across this word.
Posted by Jabberwock at 11:28 AM