Well Begun: Colonel Blimp and the fountain of youth

For my First Post column about establishing sequences, here’s a look at a brilliant scene from Powell-Pressburger’s The Life and Death of Colonel Blimp – and why it feels so personal at a time when I have been trying to write chronicles centred on the movie-watching summer of 1991
-----------------

“How do you know what sort of a fellow I was when I was as old as you are now?”

When we first meet Clive Wynne-Candy, the protagonist of the classic British film The Life and Death of Colonel Blimp, he is an old major-general, rotund and walrus-like in appearance, sweating heavily in a Turkish bath. He is also about to be ambushed by a group of young soldiers – his own countrymen – who are conducting a wartime training exercise. 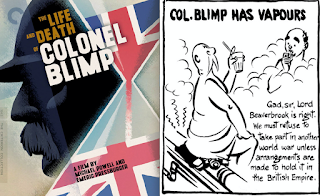 The scene is set during WWII (which is when the film was made in 1943), but Candy, being a veteran of much earlier conflicts including the Boer War, clings to old notions of valour and fair play. Now he is caught, literally and otherwise, with his pants down because he thought the training exercise would begin a few hours later, as had been agreed. But the youngsters retort that the current enemy, the Nazis, can’t be trusted to honour such pacts – the age of niceties and gentlemen’s agreements is long gone. They see Candy as a relic and mock him, while the walrus sputters indignantly at this impudence and lack of respect.

The Candy character is loosely modelled on David Low’s famous “Colonel Blimp” comic strip, which was meant to expose the pretensions of a stuffy and jingoistic old soldier. But as it happens, this film aims at a more fleshed out, multi-dimensional view of this man. It will take us into the past to show us the personal history of Candy over a period of four decades, spanning many forms of fighting and romance and friendship. And it will commence this movement with a beautiful, audacious scene.

During that Turkish bath confrontation, the enraged Candy runs after his chief tormenter, pushes the young man into the water, and plunges in after him. As they wrestle, he harrumphs:

“Puppy! Gangster! I was fighting for this country while your father was still in bum-freezers.
[…] How do you know what sort of a fellow I was when I was as old as you are now… Forty Years Ago.”

The sound of those last three words comes to us as a bubbling echo, as if from a deep underwater cavern. The two men slip out of sight, an elegant camera glide leads us along the length of the pool… and culminates in the younger version of Clive Candy emerging from the other end. 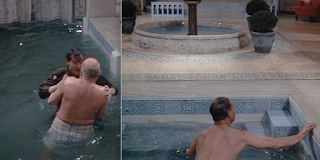 A transition to four decades earlier has been made in a single unbroken take – no cuts or dissolves or fade outs or any of the other techniques that were traditionally used to mark the passage of cinematic time.

Weirdly, the other instance of something like this that comes to my mind is from a scene in the 1973 Hindi film Yaadon ki Baaraat. It’s one of those familiar scenes where a child is about to transform into the adult star, except that there’s nothing familiar about the way it’s done here. A boy on the run has just stopped to catch his breath atop a small bridge; the camera pans down to his legs and feet, then moves slowly through 360 degrees with nary a blink (as it does this, we see a train passing below; the only real movement within the frame). When it returns to its starting point, the same space is occupied by the adult version of the character, played by Dharmendra. Again, no cuts or dissolves, just the brilliant conceit that a simple camera movement lasting a few seconds can carry us across many years of narrative time.

Unusual as that moment in the Hindi film was, the Colonel Blimp scene predates it by three decades. Which should come as no surprise if you’re familiar with the splendidly inventive 1940s oeuvre of Michael Powell and Emeric Pressburger, who made this film as well as other classics: among them Black Narcissus, A Matter of Life and Death, A Canterbury Tale, The Red Shoes, and I Know Where I’m Going.

Re-watching those films last year in preparation for an online course I taught about Powell-Pressburger, I delighted again in the rich mingling of fantasy and reality, the inner life and the external one. One thing I emphasised in the course was the use of transitions in these films, including the shifts from the present to the past and back again. The “Forty years ago” pool scene is a notable one, but there are so many others. In one of my favourite films, A Canterbury Tale, a cut from a hawk soaring across the sky to a modern fighter plane in the same space takes us swiftly from the 14th century – the time of Chaucer’s Pilgrims – to the 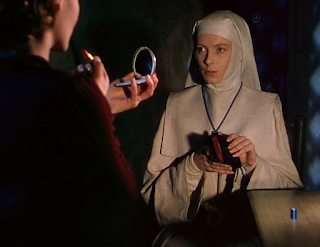 present day. And in Black Narcissus, a nun posted at a convent in the Himalayas experiences little memory triggers – visual and aural ones – to her earlier, much more carefree life in Ireland. When Sister Clodagh (played by Deborah Kerr) hears the sound of a barking feral dog in the distance, we get an instant flashback to a horseback adventure with her boyfriend, hunting dogs scampering beside them; an overheard reference to a grandmother’s foot-stool similarly takes her back to a warm family gathering (and the frame shifts from a relatively subdued palette to something brighter, more saturated).

Scenes like these, as well as countless others, can’t be described in mere words; you really have to experience the magical world of Powell-Pressburger for yourself (in good prints and preferably on a largish screen). However, there is another reason why the Turkish bath scene in The Life and Death of Colonel Blimp – and the old man’s grunted “Forty Years Ago” – strike a chord for me. This is why: in recent months I have been on many nostalgia dives of my own, some of them involving immersions into my old diaries from the early 1990s (Thirty Years Ago!), which was a pivotal time for me as a movie buff developing new tastes and entering uncharted worlds. 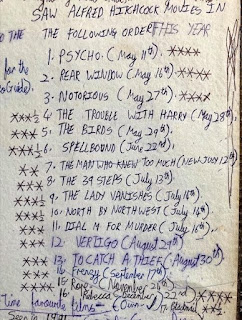 As I negotiate the turbulent waters of those diaries, I feel a bit like Candy entering the bath and coming out at the other end. I encounter a different version of myself, and the world has of course changed too. It is the world of 1991, with economic liberalisation around the corner and satellite TV about to change our viewing habits forever. I have recently become obsessed with old American and British cinema, and in the process become even more solitary than before, cut off from my friends who don’t share such interests. The internet is still many years away, and one has to work hard not just to get prints of such films but also to acquire any details about them from embassy libraries or from movie guides in second-hand bookstores. CD-ROMs containing useful information are in the near future, but it is beyond imagining that a day might come when one can interact in real time, through a computer, with other movie buffs based around the world.

In the decades since then, I have been fortunate enough to have had many online and offline conversations about cinema with a variety of people – including some young students who are genuinely curious about old films. But there are also times when I feel like an old fogey, waxing on about things that seem to have little relevance to today’s viewers. With countless new films and web series being released each week across a host of OTT platforms, when there is so much competing for a movie nerd’s attention (and when even someone who has the luxury of 12 hours’ viewing time per day might feel overwhelmed by watch-lists), how does one meaningfully curate thousands of films across genres and categories that are 60, or 80, or 100 years old? And how does one argue with a “woke” viewer who firmly believes that old films were regressive products of a backward age, that they might have some value as artefacts but can’t really “teach” us anything today?

The pragmatic answer for me is: keep trying. Write about such films in columns, host online discussions about them once in a while, hope that I might get a few people as engaged with these things as I was thirty years ago. Wrestle in the pool of argument and opinion, dunk the head of a “young un” under water if you need to, hope to infect others with your passion. But in doing all this, try not to be a boastful old blimp.

[Earlier First Post columns are here. And here is an old piece about A Canterbury Tale]

Posted by Jabberwock at 2:18 PM