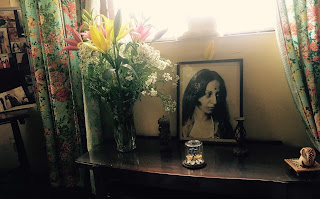 It is generally held that the day of a beloved parent’s death will be seared forever in your mind's private calendar. And this probably is true for most people, depending on (among other factors) the circumstances of the passing. It wasn’t that way for me though. Feb 27, 2018, when my mother went, feels like just another date to me. Mum had been deteriorating for weeks, the writing was on the wall, and in the final 48 or so hours she was barely there; my dominant emotion after switching off the oxygen machine that morning was relief, and the next-dominant emotion for that day was growing annoyance at the number of people who dropped in over the next few hours and bustled about the house, before we left for the crematorium.

The next morning, when I went to collect the ashes and met a couple of well-meaning relatives, they spoke in soft tones and seemed to assume that I wouldn’t have got any sleep the previous night. I was surprised by the assumption; it was the calmest and fullest night’s sleep I had had in weeks.
For me the truly devastating date when it comes to my mother was July 4, 2016 – five years ago yesterday. The afternoon I sat down to talk with mum about needing to get her treated for an old kidney ailment – which is what I thought had been causing the extreme discomfort and weakness she had been suffering from – and she told me in a deadpan, matter-of-fact way that it was something more serious; that it was almost certain to be a very advanced case of breast cancer.
I wrote about that conversation in this essay about my relationship with my mother, but no words will ever be enough to convey everything that was going on in that moment: the surreal casualness of it, the TV playing in the background, Lara watching us both from her spot on the bed (and my mother and I looking at her after the big revelation had been made, both of us thinking about how this very nervous and dependent child would be looked after if mum was admitted to hospital for a long time).
The next day in the oncologist’s room, after he had taken a quick look at her and then, face all solemn, looked at me and shook his head… followed a few minutes later by the estimate that she had maybe a year and a half left – normally you’d think that THAT would be the defining moment when blackness shrouds you. But again, it wasn’t – it was something I was fully prepared for. My mother had, in her unflinchingly direct way, already made the diagnosis a day earlier, and knowing her, I had no reason to think she was being over-dramatic or exaggerating; if anything, it turned out to be just the opposite as scan after scan revealed the extent of the disease, the havoc it had already wreaked, and the high pain threshold that had made it possible for her to continue to seem relatively “normal” when she was anything but.
Many, many stressful things – including things that one couldn’t have any way of being prepared for – would of course happen over the next year and a half, all the way to the end. I have written elsewhere about a few of those too, such as the demoralizing scan report that told us there weren’t many slivers of hope left and that a second round of chemotherapy would be required, even if it only delayed the inevitable. (This period also saw the deaths of my dadi, in December 2016, and my father, in May 2017. Those are other, linked stories) But despite all those ghastly milestones, July 4, 2016 remains far and away the most shiver-inducing date for me, the date that separates the “before” and the “after”, the moment when I knew everything had changed once and for all.
Posted by Jabberwock at 7:09 AM