People, places, nostalgia and imagination in Bombay Rose and Ottaal

It starts with abstract dabs of paint, mainly shades of brown. They spread slowly across the screen – a brush-stroke here, another there. At first there is no telling what they will add up to, but soon there are enough of them to form a larger picture: the skyline of a city, or a ramshackle section of a city. More specific images now crowd the frame: a busy road, people walking, vehicles zipping by, movie hoardings. A setting has been established, a narrative begun.

Gitanjali Rao’s animated film Bombay Rose opens with this movement from haziness to clarity; with nebulous blocks used to construct something sharp and defined. A little later, similar blurry boxes of colour will resolve themselves into a small marketplace where we are introduced to two of the film’s protagonists – a flower-seller named Kamala and her school-going sister Tara. 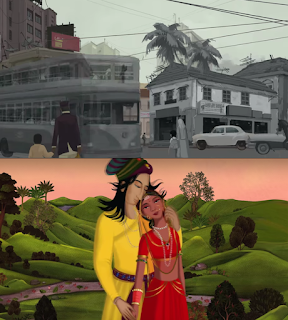 These opening scenes depict one version – or one specific experience – of Bombay, and others will soon follow: this is a set of interlinking stories about people from different backgrounds and religions, facing various demons and various types of loneliness. For each of them, “Bombay” is as much a state of mind as a place – the city is of course a bustling physical entity, but it is also a fluid one, constantly shaped and reshaped in the characters’ imaginations. Kamala fantasises about being a princess in a genteel bygone era (and is brought back to rude reality by a dalaal who wants to send her to Dubai). Her boyfriend Salim is nourished by the escapist dreams of Bombay’s cinema – and its heroes who can make the impossible possible – but also haunted by memories of the Kashmir he was forced to flee when his parents were gunned down. And, in some of the film’s most elegiac passages, when Shirley D’Souza – an old actress who worked in the 1950s – walks through her nook of the city, colour yields to black and white and the landscape she passes transforms into what it once was – what it still is in her mind’s eye.

This depiction of the past moving alongside the present is one of the most striking things about Bombay Rose. Old songs like “Aaiye Meherbaan” fleetingly grace the soundtrack. A reflection of Shirley in a mirror shows a younger version of her. Ghosts dance in a graveyard. The sleeve of a shirt – draped across a chair as a stand-in for a long-dead lover – appears to move as if in response to a remark (before one realises that a cat had brushed against it). A weary clock-maker – seemingly a relic of a bygone world, no longer “relevant” – comes alive when presented with a task that only someone like him can do; he asks for his tools – “mota chashma! chaabi!” – like a surgeon focused on his work.

While this is a Bombay film, and is about the many possibilities of that city, one can also argue that it isn’t about any one place: it is about people and the things they carry inside them, from memories of the past to projections of an imagined future. Watching it, I was strangely reminded of the 2015 Malayalam film Ottaal, even though there isn’t much surface similarity between these two works or their settings.

Ottaal, intelligently adapted from a Chekhov short story, begins with ethereal images of the Kuttanad backwaters where a child – soon to be sent away from the only home he knows – spends much of his time minding ducks with his grandfather, their boat rowing across a breath-taking network of canals. To a viewer who is more interested in the quick movement of plot than in the establishing of mood, these scenes might feel self-indulgent or pretentious or slow – but as the film progresses, their importance will become clear. These images are essential markers of a childhood that is about to end: they show how much this boy is part of his setting, and what he is going to be separated from. They are also sights that he desperately needs to preserve in his mind – how fitting it is, then, that the film does everything it can to make these images unforgettable.

A decade and a half ago, when it seemed likely for a while that I would have to shift out of the south Delhi neighbourhood I had lived in since age ten, a sudden burst of nostalgia crept up on me and I wandered the length of the colony for an afternoon, camera in hand – taking photos of the many little sights and landmarks, however unremarkable and non-photogenic, that I thought I was going to lose. A few moments in Ottaal reminded me of that rush to collect images. 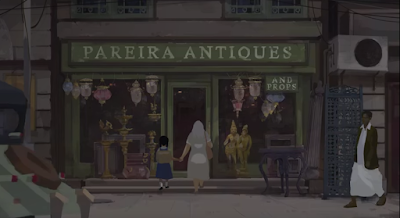 Similarly, watching Shirley D’Souza and Tara on their walks in Bombay Rose, I thought about the ways in which my neighbourhood has changed over the decades, through a gradual accumulation of events: how a leafy park where we used to play cricket as children turned into an overcrowded parking space where residents scowl at each other while manoeuvring their cars; how a large mall complex sprang up in what was once vast barren land occupied only by a dying old tree; how a video-cassette parlour morphed into a DVD store and then disappeared altogether, and a single-screen hall became a shining multiplex. And about how one’s sense of self also changes along with these things, so that you might find yourself – during a walk through the colony – alternating between being a child and an adult with just a small shift in perspective, or with a change in the play of light as you glance at something.

What these two films have in common is how they create a sense of a setting as something inseparable from the inner lives of the protagonists. They are plaintive depictions of how places define us and are defined by us. For both the old actress in Bombay Rose and the little boy in Ottaal, there will be no going back to their secure spaces – except in the world of the imagination.