(Things being the way they currently are, there is much reason to want to escape into the distant past. So here's a piece about why Trial of the Chicago 7 – a political film about a real-life 1969 trial – led me into some He-Man nostalgia. Did this for First Post)

Among the pleasures of watching Aaron Sorkin’s The Trial of the Chicago 7, with its marvelous ensemble cast and careful structuring of a complex, multi-character story, one pleasure I wasn’t anticipating was a nostalgic one. It was induced by the performance of the 82-year-old Frank Langella, who I hadn’t initially realised was in the film. 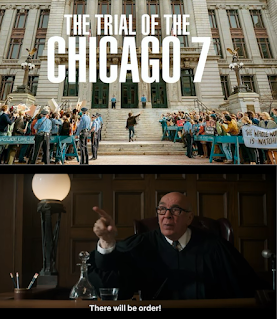 The character Langella plays is the real-life judge Julius Hoffman, who presided over the 1969 trial of anti-Vietnam War protestors charged with inciting a riot in Chicago. Hoffman often let his own political conservatism show over the course of the proceedings – scuttling the defence’s efforts whenever possible, going easy on the prosecution, barely disguising his disapproval of the defendants – and he sits comfortably in the role of antagonist in this film. (That’s assuming the viewer to be someone who doesn’t think protesting government policies automatically makes one unpatriotic; or, as we like to say in India, “anti-national”.)

The first major exchange involving Hoffman is played as wry comedy: apparently very concerned that the jury might confuse him with a defendant who shares the same last name – the Youth International Party founder Abbie Hoffman – the old judge repeatedly interrupts an opening speech to clarify that they are not related. This gives the cheeky Abbie (played by Sacha Baron Cohen, an Oscar nominee for best supporting actor this year) an opening to retort with a deadpan “Dad! No!”

It’s a fun little scene, sharply played by Langella and Baron Cohen, but in a way it is also a set-up for the viewer. Lulled into complacency by this banter, you might think “Ah. Grouchy old man, probably a bit of a pest, but basically harmless.” If so, the carpet will soon be pulled out from under your feet. Because as the film continues, the judge’s biases, combined with his stature, build towards darker moments – culminating in a depiction of the infamous real-life incident when Judge Hoffman ordered Black Panther Party co-founder Bobby Seale to be gagged and shackled in the courtroom.

Here is a denizen of the old order, a guardian of status quos, someone capable of using his power to do real harm – and this is of course something that we still see around the world. You don’t have to look much further than some of the extraordinary statements made by judges and chief justices in India in recent times, such as the one where an alleged rapist was politely asked if he was willing to marry his victim (in which case he would be let off lightly). Or the gratuitous persecution of student activists and farmer protestors in courts of law that are meant to be impartial. 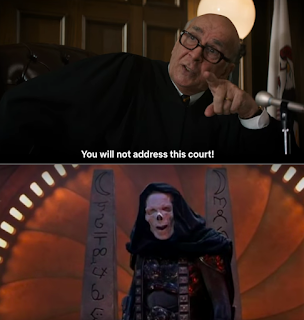 But to return to my moment of nostalgia: the sight of Frank Langella, shot from low camera angles, framed as a magisterial figure in a black robe, dispensing injustice, struck a chord for a much younger version of me. It reminded me of another antagonist that Langella had played in a very different sort of film that I cherished for a while in my childhood. The film was the 1987 Masters of the Universe, based on the He-Man comics, with the Swedish beefcake Dolph Lundgren as He-Man, a pre-Friends Courtney Cox in a supporting role… and Langella, unrecognisable beneath makeup, as the skull-faced fiend Skeletor.

****
Like many Indian kids in the mid-1980s, I had developed an interest in the Masters of the Universe franchise through the cartoon series that played on TV (with Prince Adam’s roared “By the power of Greyskull…”) as well as the little plastic “He-Man toys” available in the market (I called them action figures, but my mother never missed a chance to point out that they were dolls for boys). Only around six or seven such toys were available in India, but during a two-month vacation in London I discovered dozens of Masters of the Universe characters I’d never even heard of before. On every trip to the Selfridges store, I bought a few of these, along with the accompanying comic books that usually explained a character’s provenance; at the end of our stay, my mother and grandmother had quite a time packing the “dolls” into our suitcases, but eventually we managed to bring them all back home, to the astonishment of my Delhi friends.

Having also heard that a live-action Masters of the Universe film was coming out that summer, I picked up a promotional book that had a plot synopsis, movie stills, and a page featuring information on all the main characters, with blanks where the mug-shots of the characters were supposed to be. You had to fill those blanks by collecting stickers from candy stores – they came with purchases of specific chocolates – and I made multiple trips to Tescos to get as many as possible.

Shortly after returning to India, I acquired a videocassette of the film and watched and re-watched it, showing it to friends. I could tell that it was a less sophisticated cousin to other fantasy franchises like Star Wars or the Christopher Reeve Superman series. But I had a fascination for Langella’s Skeletor – for the commanding walk and the stentorian voice emanating from behind the cheesy makeup. Here was a super-villain to relish, in a similar league as Darth Vader and Mr India’s Mogambo and a few others. 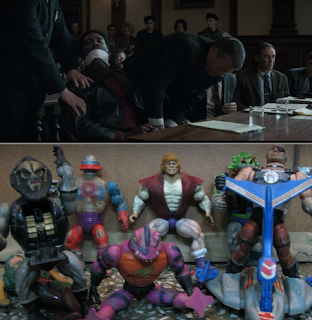 In Trial of the Chicago 7, the Bobby Seale scene includes a moment where Langella’s judge comes close to sounding like a larger-than-life villain from a fantasy film. “Marshals, take that defendant into a room and deal with him as he should be dealt with,” he says imperiously; this is followed by shots of Seale being “dealt with” – pushed and punched around some, bound and gagged – before being brought back into the courtroom. Seen in isolation, this plays almost like a depiction of a super-villain’s sadistic henchmen toying with a victim. And it reminds me oddly of the Masters of the Universe scene where Skeletor, incensed by his minions’ failure to capture He-Man, dispatches one of them with a colourful death ray (or something such).

Scary as Langella’s Skeletor once was for me, it should be obvious why, as a politically aware adult, I find his Hoffman portrayal a little scarier. But if you’re a nerdy enough movie buff, the world of realistic films and the world of mythical-fantasy ones keep colliding in surprising ways. An important scene in Trial of the Chicago 7 involves the testimony of a former Attorney General who takes the stand and says things that discomfit Judge Hoffman, the prosecuting attorneys and anyone else who has pegged the Chicago 7 as incendiary riot-mongers. Though this witness’s testimony is not admitted in the trial, it causes a shift in the proceedings. Watching the film, I was amused that this short dramatic part, of the saviour who shows up the bigots, was played by… Michael Keaton! Back in the late 1980s, we kids mainly knew Keaton as Bruce Wayne of Gotham City. For my child-self, this scene – in a serious, grounded and “respectable” film – felt like a momentary melding of superhero universes. Batman 1, Skeletor zero. 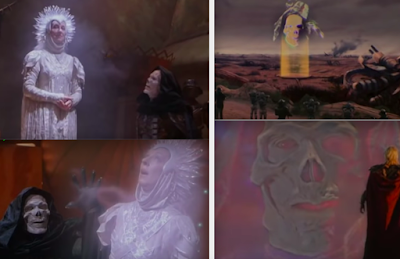 BONUS: in light of the latest Address to the Nation by an Indian leader last night, here is an early scene from Masters of the Universe: Skeletor singlehandedly vanquishing a Coronavirus and then boasting about it to the people of Eternia through special telecast. No viruses or prime ministers were harmed in the making of this screen-grab.