I have started a new column for First Post, which centres on opening scenes (or establishing sequences). The first entry is about a film that I properly discovered while preparing for the online Mahabharata course that Karthika Nair and I taught a few months ago: the 1957 Maya Bazar, a magnificent musical-comedy-fantasy that is as good as anything Indian cinema gave us in that very important decade. I still revisit its songs often on YouTube, especially “Aha Naa Pelliyanta”, which has Savitri’s superb performance as Ghatotkacha disguised as a princess, and "Vivaha Bhojanambu” (which borrows its tune from the music-hall classic "The Laughing Policeman".
Here is the piece.
--------------------------

The opening credits begin, and you can tell that a period epic is about to unfold. But first there is a brief, mood-setting interlude: a confrontation between an earthbound archer and a burly, mace-wielding fellow in the sky. They launch their weapons; the arrow and the mace race towards each other and collide in mid-air, as these things tend to do in our mythological films.

And then the main title appears. 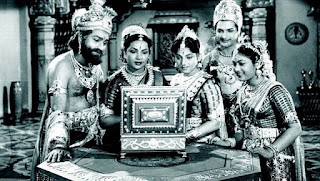 A few months ago, while teaching an online course about the Mahabharata, I re-watched KV Reddy’s magnificent 1957 film (made in both Tamil and Telugu), and was again enthralled – by the humour, the visual grandness, the music, the performances, the ceaseless sense of wonder. But I was also struck by that opening moment, which is a taster of an important later scene.

A viewer who doesn’t know about the plot of Maya Bazar might – on the basis of visual cues accumulated from other mythological films and TV shows, or the iconography of Amar Chitra Katha comics – conjecture what is going on here thus: the archer is the hero; the heavily moustached mace man (who slightly resembles the Ravana of the 1980s television Ramayana) is the antagonist; perhaps even a wicked asura.

But as it happens, these combatants are both the progeny of the heroic Pandavas, both destined to play key roles much later in the great epic. Abhimanyu, the son of Arjuna and Subhadra, has strayed into the enchanted realm of Ghatotkacha, the son of Bheema and Hidimbi. They don’t yet recognise each other, but when they do a joyous brotherly reconciliation will take place – and their mothers, one a Yadava princess, the other a rakshasi who rules over a forest, will greet each other as sisters. Like cousins going to a film together during the summer holidays, Abhimanyu and Ghatotkacha will even settle down to watch a stage performance of a famous Puranic story (the one about the asura who acquires the boon that he can destroy anyone by placing his hand on their head).

Shortly after this, Ghatotkacha will use his powers to help Abhimanyu reunite with his love Sasirekha – and this becomes the pretext for a delightful comedy involving action and impersonation and a lavish wedding feast.

All that comes later, though. The first narrative scene of Maya Bazar (after those opening credits) is set in Dwaraka, the abode of Lord Krishna, who is the other magician or “maya-vi” figure in this film. The early scenes will stress both the magic in the air (a box-shaped device, which can be opened to communicate with people who are far away, is like a bejewelled prototype for an online video-call) and Krishna’s divinity – most notably in a beautiful sequence that points to how he has been mythologised in his own lifetime. But these scenes are also about family politics, romance, and the casual chatter that takes place in everyday life, even when the people involved are legendary figures like Krishna or Balarama. 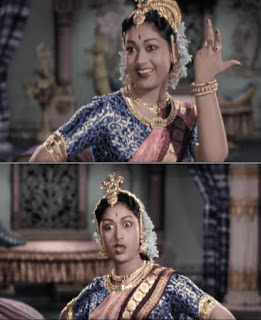 If you grew up watching Tamil or Telugu films anytime from the 1950s onward – or even had some knowledge of these cinemas – you would know Maya Bazar, and its towering reputation, in the same way that Hindi-film viewers know of Sholay or Mughal-e-Azam. Apart from its exceptional qualities as a musical-comedy-fantasy, it brings together some of the most notable names in south Indian cinema – starting with NT Rama Rao in the first (and possibly the most endearing) of his many performances as Krishna, and SV Ranga Rao as Ghatotkacha, who goes from being fearsome to childlike in the blink of an eye. The young Savitri is superb as the heroine Sasirekha (known as Vatsala in the Tamil version), particularly in the scenes where Ghatotkacha, disguised as the princess, shifts from daintiness to demoniac swagger and back again. And across the two versions of the film, the role of Abhimanyu is played by two major stars: Akkineni Nageswara Rao in Telugu and Gemini Ganesan in Tamil.

On the other hand, if you did not grow up with those languages and cinemas, you might go decades as a movie buff without knowing much about Maya Bazar. I was in my late thirties when I got to watch a good print with subtitles, and halfway through I knew I was in the presence of cinematic brilliance. For me it now ranks alongside any of Indian cinema’s finest achievements of that decade, from Satyajit Ray’s Apu Trilogy to the best work of Guru Dutt, Raj Kapoor and Bimal Roy.

To some degree, this has to do with my Mahabharata-love; to be able to appreciate Maya Bazar in all its dimensions, one has to appreciate its fresh, whimsical slant on characters who are already familiar from the great epic. It is based on the folk-tale Sasirekha Parinayam, which had been filmed as far back as the 1930s, and the ways in which the story departs from the canonical Mahabharata are very telling. 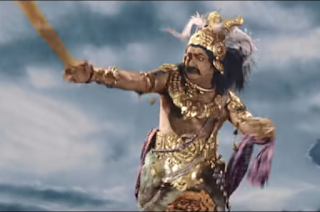 For instance, it might seem strange to say that this is a comforting, heart-warming film, considering that in the mainstream Mahabharata both Ghatotkacha and Abhimanyu end up dying in tragic circumstances – it might even be said that both of them are sacrificed as a gambit by Krishna. (Ghatotkacha’s death is the one that is explicitly presented as a ploy – Krishna wants Karna to use his lethal weapon against the dispensable rakshasa rather than against Arjuna – but Abhimanyu’s killing also serves the function of harnessing Arjuna’s fury and raising the stakes and intensity of the war.) Watching the interaction of the central characters in Maya Bazar – especially the camaraderie between Krishna and Ghatotkacha – it is hard to imagine these same people in that distant, calculated scenario on the Kurukshetra battlefield.

But the thing is, Maya Bazar exists in its own bubble or vacuum. It is unconcerned with what is to come in an uncertain future, it is rooted in a fantasy present where all the good guys will emerge unscathed after having had some fun with the bad guys. Viewed in isolation, it plays a bit like a moralistic but comical and (mostly) non-violent version of the Mahabharata. The Pandavas never even appear in this three-hour film; Draupadi only appears in one fleeting moment early on, which provides a signpost for the depth of the Kauravas’ evil.

As Vamsee Juluri put it in his book Bollywood Nation: India Through its Cinema, “Some of the most popular [Telugu] mythological films of this time focus not on a pedagogic panorama of well-known episodes, but instead on minor, seemingly unimportant tales […] they are less about the whims and fancies of the Gods, and more about what happens when they are enmeshed in the web of human relationships.”

In critical renderings of the Mahabharata – the ones that are concerned with the big picture – Ghatotkacha and Abhimanyu occupy very different positions when it comes to the question of legitimacy. Despite Ghatotkacha being the oldest child of a Pandava, and the many references to their affection for him, it is clear that he is not an official heir; he exists on the margins of their kingdom. (“I live in another world, and I must go back with my mother,” he tells his father Bheema in a poignant scene in Peter Brook’s film version of the epic, “But if one day you need me, I’ll hear your call.”) Yet the effect of folk-takes like Sasirekha Parinayam – and other similar variations on the main Mahabharata story – is to reclaim this “rakshasa” prince as a member of the inner circle.

One of the themes of Maya Bazar is that appearances can be deceptive and that identity can be fluid (a princess celebrating her upcoming wedding through a song might make un-ladylike expressions and “manspreading” gestures) – and we are prepared for this theme by that opening scene, which briefly places Abhimanyu and Ghatotkacha in opposition, then unites them. Here they are, one the legitimate Pandava heir, the other an outsider who (in conventional Mahabharata tellings) is treated as a distant ally summoned to make a sacrifice; and yet here is a moment where they are enjoined together in genuine kinship, all boundaries falling away. It is one of the loveliest conceits of this film about a marketplace of illusions where anything can happen.

Posted by Jabberwock at 6:27 PM

Email ThisBlogThis!Share to TwitterShare to FacebookShare to Pinterest
Labels: Mahabharat