The eye of the artist: on Roger Corman’s A Bucket of Blood and The Little Shop of Horrors

(the second entry in my “establishing sequences” column for First Post – this one about a low-budget 1950s genre film that offers a chilling, and funny, view of creative people as entitled predators)
--------------------

Those are solemn opening words for any film, and they are intoned by a solemn, bearded man who is looking straight at the camera from behind the opening credits. The camera draws back, as if startled into retreat, and the man – soon to be revealed as a Beat poet reciting at a club – continues his portentous verse to the accompaniment of a trumpet solo.

“For there is nothing else to talk about.
For there IS nothing else.
Life is an obscure hobo, bumming a ride on the omnibus of art.”

On that last line – which can sound goofy or profound, depending on the mood you’re in – the film’s protagonist enters the frame. Walter Paisley, an obscure hobo if there was one, is serving food and drinks at nearby tables, watching the poet, fascinated by the recital. As the credits (and the poem) end, Walter is at the table of the girl he fancies, looking at a 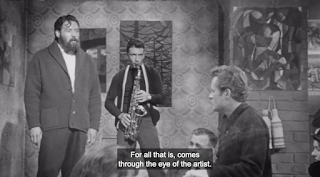 drawing she has made. “What kind of people do you like, Carla?” he will ask her later. “Thinking people, I guess,” she drawls. “Artistic people.”

Roger Corman’s 1959 film A Bucket of Blood will turn out to be a wry comment on the idea that artists – “thinkers” – are superior to other, “ordinary” people. But to describe this film primarily in such terms might be pretentious. Because this is, first and foremost, an entertaining and fast-paced B-movie, a horror-comedy made by Corman and his writer Charles B Griffith on a tiny budget in just five days.

Only then is it also an unusual and intriguing look at the parasitic relationship between a creative person, his subjects, and his audience.

Artistic recognition will come to Walter in macabre circumstances, after he accidentally kills a cat and then covers it with clay to make a “sculpture”. But once the spiral of fame begins, he finds that he is addicted to it. “What am I going to do next?” this confused young man asks himself at one point, “I’ve got to do something before they forget. I know what it’s like to be ignored.” 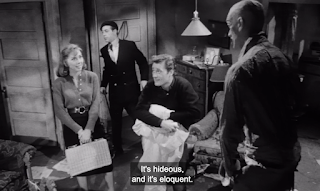 It’s the fear of every insecure artist: that the last thing you did – however well-received it might have been – will be forgotten very soon and you need to find a way to stay relevant. Speaking those words, Walter could be a writer or filmmaker hoping to reach out to a younger audience, fearful that they might think his work dated (or that they might even be unaware of it); or a painter keeping a worried eye on new movements that might make his accomplishments seem quaint. His art demands sacrifice, Walter realises – not only from him but from others too.

But back to that opening sequence, which establishes the film’s mood – its strange mix of the languid and the urgent – and foreshadows what will happen in the story. The Beat poet, Maxwell, drones on about artists as exalted beings.

“Let them become clay in his hands, that he might mould them,” Maxwell says, “Stretch their skins upon an easel to give him a canvas. Crush their bones into a paste.”

For all that is comes through the eye of the artist. The rest are blind fish swimming in the cave of aloneness. Swim on, you maudlin, muddling, maddened fools, and dream that one bright, sunny night the artist will bait a hook and let you bite upon it. Bite hard, and die. In his stomach you are very close to immortality.

Incidentally, having watched the film with subtitles enabled, I felt it was useful to be able to “read” the poem at the bottom of the screen as one heard it. It’s likely that many people who watched A Bucket of Blood during its initial run missed the import of this scene. Apart from the fact that you don’t expect such intense verbal imagery from a B-movie of this sort, in those days the part of a film that played while the credits were still running was easily dismissed as not being vital to the narrative. (In 1950s America, there was also the bizarre tradition of people sauntering in to watch a film at any point, with little respect for show timings.) So this could be a case where subtitles – used even where the viewer has no trouble understanding the dialogue – can add a dimension to a scene, encouraging us to pay attention. 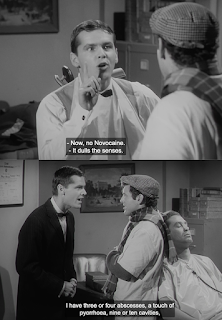 A year later, in 1960, Corman and Griffith made a better known horror-comedy, The Little Shop of Horrors, a delightfully weird story about a florist-shop employee tending to a bloodthirsty plant. It’s a film full of manic humour, including goofy non-sequiturs, neologisms (“It’s monstrositive!”) and malapropisms (“it’s a finger of speech!”); the oddball characters include a customer who likes to eat flowers, and two detectives who have impossibly terse exchanges; and there is a short appearance by the 23-year-old Jack Nicholson (the Satanic grin of the future already plastered on his face) as a masochist who visits a dentist hoping for pain.

The structural similarities between A Bucket of Blood and The Little Shop of Horrors are obvious: each deals with an awkward young man who, initially through circumstance rather than intent, becomes a celebrity in his social circle, and then finds that building on this popularity requires crossing an ethical line (to put it mildly).

While The Little Shop of Horrors is probably a funnier film on the whole, the grim – even unpleasant – humour of A Bucket of Blood is surprisingly effective too, as Walter goes from genuine regret (about the provenance of his first couple of sculptures) to becoming seduced by praise; the need for creative validation quickly overcomes other considerations. (“Let it all crumble to feed the creator,” intones Maxwell during that opening poem; one is reminded of Audrey the insatiable plant in The Little Shop of Horrors.)

Just as notable is A Bucket of Blood’s depiction of various aspects of the Beat culture of the time: the endearing idealism, the casual chatter about organic food and wheat germ oil, the “groovy” exclamations like “Too much” and “Man, we have to make this scene”. And the pretentiousness of a certain type of intellectual manque. It’s easy to see why the sage-like Maxwell is a revered figure in club circles, but as the story progresses his impressiveness wears off to reveal something more banal (much like the clay wears off Walter’s creations at inopportune times). 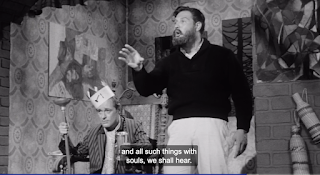 For instance, in a late scene, Maxwell, noting the public interest in Walter’s sculptures, says: “You could get 25000 on these pieces alone.”

“I thought you put money down,” Walter replies.

“I do!” Maxwell says, looking more animated than we have ever seen him before, “But 25000?!” Here he is, the high-minded poseur scoffing at materialism only as long as the reward isn’t too tempting.

1959 and 1960 were years when major filmmakers around the world were doing some of their best work, and this was also a key period for the horror genre. A Bucket of Blood came a year before Michael Powell’s Peeping Tom, in which a disturbed young photographer’s quest for a “perfect” image of fear leads him toward murder as a sort of art form. Peeping Tom was denounced as an “evil” or “immoral” film by many contemporary critics, but even those reactions indicated that people took the film (and its director) seriously enough to be offended, or scared about its impact. Roger Corman’s films were rarely given that much importance; they were treated as second-rate fare that didn’t need to be seriously reviewed, and which wouldn’t reach respectable viewers anyway. But that’s an injustice to a film like A Bucket of Blood. It isn’t as polished or as well-crafted as Peeping Tom – or some of the other seminal horror films of the time, like Hitchcock’s Psycho – and it suffers from its budgetary limitations. (For instance, the final shot – I won’t reveal what it is – could have been much more effective, and poetic, with better makeup or more time.) But it has its own special strengths, and sly things to say about both a particular subculture and about artists in general. In the end, it lives up to that promise made in its opening declaration.

[Earlier First Post columns - on literature and cinema - are here]

Posted by Jabberwock at 1:14 PM