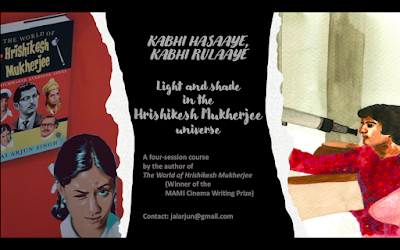 Here are the details of the online course I will be teaching about Hrishikesh Mukherjee's cinema, starting January 24. Anyone who would like to sign up, please mail me (jaiarjun@gmail.com) -- and please spread the word to others who might be interested.

Starting in the late 1950s – when he went from being an editor and assistant director to making his own films – Hrishikesh Mukherjee became the best-known practitioner of the Middle Cinema, a term for gentle, grounded Hindi films that occupied a niche between the larger-than-life mainstream movie and the self-consciously realistic or minimalist “art film”. Working in this middle space for four decades, Hrishi-da, as he was popularly known, helmed dozens of films including such all-time favourites as Anand, Gol Maal, Guddi, Chupke Chupke, Anari, Bawarchi, Abhimaan, and Anupama. His best work struck a fine balance between fun and solemnity, using soufflé-like narratives to express thoughtful ideas about people, how they relate to each other and the world around them, and about the vital link between fantasy and life.

This four-session course will look at some of Hrishi-da’s most beloved films as well as some of his neglected gems. Talking points will include his use of music, recurrent themes such as role-playing and masquerade, the inspirations behind some of his best-known work, and how he managed to practice a form of personal, intimate cinema even as he consistently worked with the industry’s biggest stars. We will look at and discuss specific clips during these sessions, and also talk about some of the criticisms that have been leveled at him by those who were dissatisfied with either the form or content of his films.

It will be useful for participants to have a degree of familiarity with a few of Hrishi-da’s films, but it isn’t imperative. In any case, while keeping the focus on his work, we will also be talking more generally about different filmmaking styles and approaches, of which the Middle Cinema is one.

While the main course will be spread over four sessions, in the fifth week there will be a bonus session for extended, informal discussion as well as some music.

A few of those who have mailed me expressing interest are in time zones that make the above hours impractical. Accordingly, I am offering an additional option for each of the four main classes, on the same dates:

If you mail me confirming your interest in this module, please also mention your preferred time. If a reasonable number of participants apply for the morning slot, I will conduct each of these sessions across both timings.

(Recordings of each session will be sent to all the participants.)

Fees for the course

For participants in India and Asia:
Rs 4000

For participants outside Asia:
$125

(For any other information, please mail: jaiarjun@gmail.com)

Posted by Jabberwock at 8:42 AM