(Wrote this for Money Control)

An early scene in the new series Escapye Live follows a template familiar from the classic superhero movie – namely, the rousing moment where regular-feller Clark Kent zips into the phone booth for the first time and emerges as the Man of Steel. The Escaype Live scene involves another form of role-play and empowerment, though. It has a young woman named Hina (Plabita Borthakur), who works as a server in a fancy restaurant, taking matters into her own hands after being pawed once too often by male customers. Hina’s circumstances don’t allow her to take direct revenge, but she finds another way to assert her agency in a world that treats her as an object: out comes a mask, a dominatrix’s costume, a whip and other accessories, and here is a new persona, the sexy “Fetish Girl” whose teasing videos keep men in thrall. She soon becomes a star on a new, Tiktok-like App called Escaype Live. 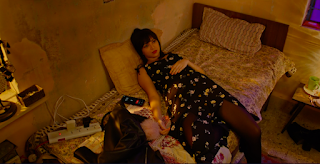 What adds frisson to this transformation is that we have met the “constructed” Fetish Girl before we meet the “real” Hina. The show’s first episode introduces Fetish Girl as a skimpily dressed character, purring “Hello boys” in provocative poses, and getting hearts and diamonds as rewards from her salivating audience; our feelings about her at this point may be similar to those of the puritanical Krishna (Siddharth), a new employee at Escaype Live who is starting to get repulsed by his company’s activities. But after we encounter Hina in episode two, the character becomes sympathetic and relatable (this is partly a function of Borthakur’s fine performance).

To varying degrees this is also true for the show’s other protagonists, underprivileged people who get a shot at the big time via the new App. The participants hoping to win its Rs 3-crore competition include a 10-year-old Rajasthani girl named Rani (encouraged by an ambitious uncle who gets the girl injected with hormone-altering drugs to make her look more “grown up” while performing very adult dances) and a young slum-dweller named Nilesh who uses his parkour skills to impress viewers and rise up the rankings… but who must first overcome his own fandom of one of Escaype Live’s biggest stars, a sneering prankster named Darkie.

Along the way, these people must also deal with parents who dissuade them. Stop dreaming of penthouses and hot showers, Nilesh’s father tells him: “Naali ne hee paala hai tumhein.” (This slum’s sewers have raised you.”) In an intriguing touch, Rani’s father – a “simple” man who has barely ever seen a smartphone – wants his little girl to study instead of wasting her time on dance competitions. There is a sense of an older generation who never had such opportunities and can’t understand the youngsters’ hunger; but there are also a few people like Rani’s mother (played by the always-engaging Geetika Vidya Ohlyan) who are curious enough about the possibilities of this new medium that they allow it to override their fears and misgivings.

This App is an inevitable culmination of the affordable-smartphone era, a democratising medium that can either make or destroy the lives of millions of users (many of whom have no real idea what they are getting themselves into or how dangerous this addiction can become). Explaining the awkward “Y” in “Escaype”, the company’s founder Ravi Gupta (Javed Jaffrey) says: “People become successful when they start asking themselves the Y/Why questions: Why am I not rich? Why am I not successful? Why should the world not accept me?” 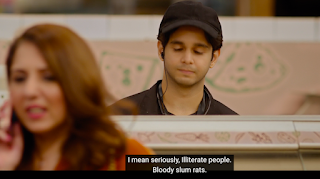 What the show is trying to do with this theme is clear, but I had conflicted feelings about its depiction of class struggle and aspiration. Some scenes are simplistic and on the nose; as viewers increasingly used to grit and realism in the OTT world, the tendency is to draw back from – or feel embarrassed by – anything that seems heavy-handed. But it’s also worth asking the question: when such conflicts take place in a society as complex and multi-tiered as India, isn’t reality itself often melodramatic?

In one scene set in a shop’s trial room where Fetish Girl is rehearsing her moves, an aggressive male employee goes from snarling at her to obsequiously mumbling “Ok ma’am, yes ma’am” when she says she’ll buy all the expensive clothes she tried. In another scene Nilesh, working in a departmental store, is on the receiving end of classist abuse from a hoity-toity customer who is outraged that he touched her cheese with ungloved hands. Both these scenes, and others like them, are far from subtle – they are calculated to wring an emotional response from the most naïve viewer. And yet, one reflects: don’t many privileged people behave exactly like this? Why demand subtlety and nuance from every situation when those things don’t necessarily exist in real-world interactions of this kind? 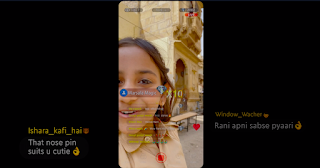 It should also be kept in mind that a show like this, by the very nature of its story and its character types, can be potentially annoying to the eyes and ears of “sophisticated” viewers. (Many such viewers will respond to it in exactly the same condescending way that they have responded over the years to the TikTok universe, made up of all those “uneducated” types trying to be “cool”.) Almost from the opening scene, our senses are assailed by loud, disruptive sights and sounds: flashing images of smart-phone videos featuring garishly dressed or made-up aspirants, along with glimpses of ungrammatical viewer comments and emojis that come and go so fast one can’t process all of them. Or songs with lyrics like “Oh my little Bulbul, I’m Banjovi / Dance my little bulbul, you’ll get money”, which might seem lowbrow to many viewers, but which serve a definite function within this narrative – an invigorating soundtrack for someone trying to pull themselves into a better world.

This is not to gloss over or excuse Escaype Live’s own flaws of execution. Some of the acting, especially by the supporting players, is mediocre, the writing is often dull exactly when it needs to be intense and focused, and at a technical level there are scenes that look impressive on the surface but collapse on further examination. Consider the one where Nilesh – having set a video challenge for himself – jumps and swings and vaults across a jumble of houses and slopes in his slum, to get home with a bag of eggs unbroken. We privileged viewers get to watch most of this scene through a camera that is purely for our convenience: it shows us the whole topography in detail, records Nilesh’s movements up close and from many different angles, for the most thrilling effect. But the video that is being taken for the challenge – the one that is supposedly impressing Nilesh’s audience – is being recorded on a phone camera by his friend Aslam; and as the scene unfolds, it becomes obvious that Aslam is lagging well behind Nilesh and certainly not replicating his gravity-defying feats – so how is a good video even possible?

However, the single most tedious thing about Escaype Live may be its one-dimensional use of the Siddharth character Krishna as the sole voice of conscience. Here is a software engineer who presumably knows a thing or two about the workings of social media, and about the company he has joined – and yet, after a single day on the job and one encounter with Fetish Girl, he is suddenly awakened to how sordid this whole set-up is. While everyone else applauds what the CEO is saying, Krishna is the one person standing in the hall with a morose expression. The cutaways to him looking solemn every time something complicated happens, the righteous pain on his face as he watches the world go sour, his relentless, soul-numbing goodness… all of this is so annoying, I wanted to throw bags of marijuana at him, along with a cartload of Vat 69 bottles and maybe a few naked belly dancers.

Later in the show, a character named Sunaina (Shweta Tripathi, who makes her first appearance in episode 3) has to similarly bear the cross of being a mouthpiece for progressiveness; in her case, by helping and encouraging a young man who identifies as a woman. Tripathi’s piquant directness and likability, combined with the fact that her scenes are more intimate (her character doesn’t have the onus of taking on a Big Evil Corporate), makes Sunaina easier to tolerate than the humourless Krishna – but the principle is much the same. While Krishna tells Fetish Girl “Behind your mask, your soul is pure”, Sunaina speaks anodyne inspirational lines like “Accept yourself first, then the world will accept you sooner or later.”

These good-guy/bad-guy stereotypes can make Escaype Live tiresome going, especially over the multi-episode format – but if you stick with it you’ll find a few gems within the dross, along with a sense of how affirmation and danger can run together. In the look on a little girl’s face when, scrolling through her feed late at night, she comes across a complimentary message from a young man who seems interesting. Or in Darkie’s constant warnings that he doesn’t want anything to do with “poor people”, which one guesses is a form of defensive self-loathing as much as anything else.

Note: So far, seven of the show’s nine episodes are available on Hotstar. This piece was written after viewing the first five episodes.

Posted by Jabberwock at 4:03 PM