King and worm: on the new slow-burn thriller Puzhu

(Reviewed the new Mammootty-Parvathy film for Money Control. Note: Sony Liv appears to have a default setting that takes you to the Hindi-dubbed version of Puzhu. I watched the original Malayalam version)
---------------

“Takshakan moved around in disguises for six days to kill the king, but couldn’t get into his palace. Then a tiny worm came hiding in an apple…”

The new Malayalam film Puzhu opens with a reference to a mythological story – the last days of King Parikshit, grandson of the Pandava hero Arjuna. Following an act of anger, or foolish pride, Parikshit is cursed to die of snakebite within seven days. Efforts are made to protect the king during this period, but eventually the powerful serpent Takshaka slips into the palace disguised as a worm-like creature in a fruit, and does what has been foretold.

When I first read the Parikshit story as a child (it provides part of the framing device for the larger Mahabharata narrative) I was struck by how similar and yet how different this king’s tragic ending is to that of his legendary father Abhimanyu, killed during the Kurukshetra war. Both men are beleaguered, trapped in different sorts of Chakravyuhas (in one case the danger lies within the breached circle; in the other, the danger is outside, trying to get in). But while Abhimanyu gets one of the most heroic and stirring deaths in ancient literature, Parikshit’s is pathetic, cautionary, unromantic.

The title of Ratheena PT’s directorial debut means “worm”. If one goes for a direct mapping with the Parikshit tale, the arrogant king here is Kuttan (Mammootty), a former police officer who seems trapped in a chakravyuha of his own making. Kuttan has reason to believe that someone is trying to kill him. But who? And which of his misdemeanours, past or present, is the trigger?

This plot summary might make it seem like Puzhu is a regular narrative film, perhaps even a fast-paced cop thriller, but that is far from the case.

One of the many things that contemporary Malayalam cinema does well is the slow-burn mystery – which includes the film that doesn’t initially play as a thriller but unobtrusively glides into edgy or dangerous terrain (and does this without sacrificing its subtle, grounded tone). Notable recent examples have included Aarkkariyam (which starts off as a family-oriented drama about a young couple visiting the woman’s father… then the old man casually makes a shocking disclosure) and Kaanekkaane, in which a bereaved father starts to get suspicious about his former son-in-law.

Puzhu is comparable in tone and texture to those films, but it has a looser, more detour-laden narrative, one that’s made up of vignettes. First we meet Bharati (Parvathy) and her theatre-actor husband KP (Appunni Sasi) – a recently married couple who are looked on with suspicion by the many caste-conscious people around them (she is relatively fair-complexioned and a Brahmin; he is clearly “below” her in status). It is only later that the narrative introduces Kuttan – Bharati’s estranged brother – and his young son Kichu. Gradually we learn, or conjecture, little things about Kuttan, his dealings and his relationships. Much about this unlikable man, his personal and professional history, his attitudes to various “others” and to his own motherless boy, is left open-ended, but Mammootty’s magnetic presence helps keep us invested, eager to know more.

For instance, looking at Kuttan’s offhand casteism, one can speculate that when he was a policeman, he was an important cog in the machinery of caste oppression. In a few scenes, there are traces of a mellowing, of genuine fondness for his son, and of physical vulnerability: he has sleep apnea and uses a CPAP machine at night. (At a non-diegetic level, there is also the viewer’s knowledge that Mammootty is seventy now – incredibly fit though the actor looks.) But the aura of danger and cruel authority around Kuttan is never quite lost, partly because we so often see him through the eyes of Kichu who has much to fear from an obsessive, controlling father. 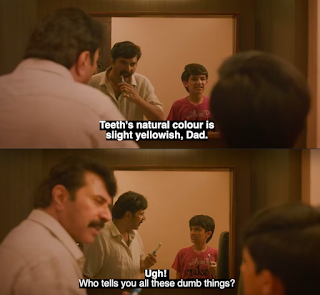 Some of the most sinister early scenes have Kuttan interrogating Kichu about school, or telling him with conviction that a tomato, contrary to what he has been taught, is a vegetable, or showing him an old home video which is always paused at the point where baby Kichu has fallen down and is encouraged to get up unassisted. Their regimented daily routine includes brushing their teeth together, so Kuttan can emphasise “four times horizontally, then four times vertically”. He moves between mature-sounding advice (“don’t take your anger out on your food”) and strange infantilising, speaking as if he and Kichu are toddlers learning to negotiate the world. This is both an alpha-male patriarch and a man who is himself still a child, possibly haunted by his memories of his own physically violent father.

The puzhu of the title can be seen as having two meanings: Kuttan himself being a worm because of his callous behaviour; or his perception of the people around him, including “low-castes”, as insects (who might kill him after contaminating his fruit, or his airway machine). It is obvious from early in the film – with the first slurs directed at Bharati and KP – that caste is an important part of this story. But the narrative, as it proceeds, also makes it clear that there are different ways of being oppressed or underprivileged. You might be the Dalit who has been bullied or tormented by a police officer (or by your future brother-in-law who thinks you are only fit to clean toilets) – but you might also be the young boy living in apparent comfort but undergoing parental hegemony. (It isn’t such a surprise that the paranoid Kuttan at one point even appears to suspect his son of being the worm in his apple, out to kill him!)

If Puzhu is an engrossing (for patient viewers) existential thriller, it is sometimes also loose-structured to the point of becoming unfocused. There are many narrative strands, some of which don’t come together. One startling scene midway through the film is very similar to a visceral moment in Michael Haneke’s Cache, but its occurrence in Puzhu feels a bit random, even derivative, since there hasn’t been enough context built toward it.

Ultimately, despite being diffused in its storytelling, this film works as a jigsaw puzzle that tries to put together a picture of a man who may be a dutiful son and a well-intentioned father but who is also the sum of many other unsavoury things. “The cruel king tramples the soul of our forest, and pulls the tusks off elephants,” goes a lament in the theatre performance that opens the film. By the end, as the line between Kuttan the king and Kuttan the worm has been blurred, one may recall Hamlet’s caution about emperors and worms both finishing in a beggar’s gut, thoroughly equalised.

Posted by Jabberwock at 5:00 PM