Munich: The Edge of War – an elegant, often-engrossing historical thriller (with an unintentionally funny Hitler)

In the opening scene of a film that has just released on Netflix, a young nationalist speaks of a new era that is beginning in his long-suffering country, and of the larger-than-life leader – with a personality cult having grown around him – who is making it possible. “They are a bunch of thugs and racists,” replies his friend, referring to the leader and his party, but the first young man is having none of it. “We are now the proudest nation on earth,” he says.

It’s the sort of conversation that might well happen in the India of today – between two people who pejoratively call each other “sickular” and “bhakt” – but the scene is from Munich: The Edge of War, and the reference is to 1930s Germany. Paul von Hartmann (played by Jannis Niewöhner) is the German student in Oxford, while Hugh Legat (George MacKay) is his English friend, and their ideological differences will eventually rupture their relationship (after an argument that includes Paul’s hair-raisingly familiar claim that “voting for Hitler is not voting against Jews – it’s voting for the future”).

Years later, their paths will cross again – at the site of the 1938 Munich Agreement between Hitler and the British PM Neville Chamberlain, where the fate of Czechoslovakia is to be decided. That’s the premise of this political thriller, adapted from Robert Harris’s 2017 novel Munich (with “The Edge of War” awkwardly added to the film’s title, presumably to avoid confusion with Steven Spielberg’s Munich).

History tells us that the Munich agreement (also known as the Munich Betrayal) was a case of European leaders falling over themselves to appease a fascist who would never be content with simply annexing one small country; as Hitler’s ambitions and claims grew over the next year, the Second World War became inevitable, and the Munich pact is now generally viewed as a giant folly. But in Harris’s dramatized alternate history – starring the fictional Hugh and Paul – more complex games of realpolitik were afoot and Chamberlain is cannier and wiser than he is usually credited as being.

Those who find that too much of a leap of faith will do better to focus on the fictionalised espionage story, convoluted as it sometimes is. Former friends Hugh and Paul are on the same side now, since Paul has come to recognise the damage being wrought in his country and is part of a secret anti-Nazi resistance. But it takes Hugh – now a secretary in the British 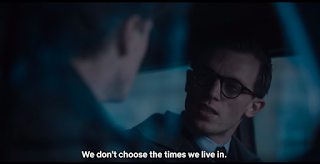 Foreign Ministry – some time to fully process what the stakes are. Like many others, he clings to the hope of lasting peace. Paul, who is more urgent (“To hope means waiting for someone else to do it”), more passionate (“The great characteristic of the English is distance. Not only from one another but from feeling”) and understands Hitler better, knows that war is coming. The question is when, and how prepared can the Allies be for it.

This is an uneven, sometimes perplexing narrative. At its best, it’s a touching story about friendship, about the ways in which the personal and the political can collide, and about the gulf between youth and experience. (On the one hand, there are young men cocky enough to believe that the world’s fate lies in their hands; on the other, an old man, committed to protocols, says “This is most improper” when asked to participate in an urgent secret meeting.) The lead performances are very good, and as Chamberlain the veteran Jeremy Irons effortlessly shifts registers between a doddering relic from a PG Wodehouse book and a dignified statesman determined to see peace. There are some nice supporting turns too – including one by the cleverly cast August Diehl, as sinister and watchful a Nazi as he was in the guessing-game scene in Tarantino’s Inglourious Basterds. The film elegantly suggests the dilemma at the heart of its story: when a situation is so bad that the only options are to embrace disaster right now or to risk much greater disaster in the future, can one find the hope or resolve to do the right thing? Is there even a “right thing”? 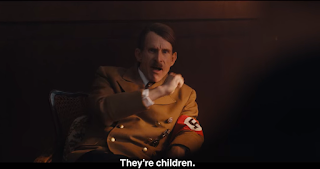 In its more underwhelming moments, though, there is much ponderous dialogue (“Friends, history is watching us.” Really?) along with some strange choices. Almost every time the Führer (played by Ulrich Matthes, who looks about as Hitler-like as Raghubir Yadav did in Dear Friend Hitler, or as Asrani did as the jailer in Sholay) appeared on screen, I wanted to giggle – which was probably not the intended effect. As portrayed here, Hitler shows the same disdain for Oxford education as Narendra Modi once did for Harvard; there is also a bit of business involving Paul’s wristwatch that was probably meant to make the dictator seem menacing but felt like slapstick comedy to me. You don’t want the Hitler in this film to remind you of Inglourious Basterds, though the story does steer close to providing a similar wish-fulfilment ending.

Also, even as one acknowledges the horrors of Nazi Germany and the need for that regime to be defeated, for an Indian viewer with knowledge of colonial history and British atrocities (even around the time of the events depicted here), there is naturally some ambivalence built into watching a film like this where the good guys and the bad guys are so clearly defined. It’s hard not to raise an eyebrow during a scene where Hitler’s imperialist expansion is described as being the opposite of everything the British PM stands for.

In fairness the film does touch on this at one point. “You’re one to talk about exploiting others, Englishman!” Paul says. “I know I’m a hypocrite, but I know fanaticism when I see it,” responds Hugh. Their conversations – where we see two young men weighing ideological positions, recognising the contradictions in themselves and in their world – are ultimately at the heart of this odd but engrossing film.