Mix and match: Aranyak, The Leopard Man, The Power of the Dog

The opening image of the new series Aranyak involves a movement from a dark space to a well-lit one: the camera follows a man in a leopard costume through a “cave” onto the stage of an auditorium where fond parents are watching a school production. It’s fun and games at first, but then the music becomes minatory, there are unsettling close-ups of the “leopard” holding a “rabbit”, and we realise that this is a performance within a performance. A human, mimicking a predatory animal, turns out to be a predator himself. 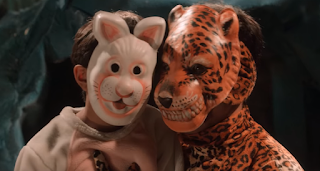 The transition from wilderness (or an impression of wilderness) to civilisation, and the blurring of Man and Beast, are central to this story, which is actually set a few years after that school-play scene. The main Aranyak narrative centres on a murder in a fictional hill town, and the widespread local superstition that a mythical creature – half man, half animal – is on the rampage. Early in the show, police inspector Kasturi (Raveena Tandon) finds a snarling leopard (a real black leopard, albeit one that’s obviously computer-generated) in her house’s compound, menacing her daughter. But we are also invited to reflect that this creature is one of many victims of human encroachment into the natural world. (An important character, a smarmy parliamentarian, is trying to convert forest land into a tourism project. “If it continues like this,” someone says sardonically, “all the wild animals will enter our homes.”)

Structurally, Aranyak is comparable to the acclaimed series Mare of East Town, which is also a crime investigation with a solid lead role for a middle-aged actress (Kate Winslet), and set in a place where everyone knows everyone else – resulting in a tangled weave of suspects, personal histories and interrelated motives. But one of the joys (and hazards) of being a full-blown movie nut is how often you see connections between generally unrelated works: how a similarity of name, or a character arc, or just a particular scene, can lead you down various rabbit-holes. Or leopard-caves. Just one whimsical example: watching a scene involving a cute rabbit – fussed over but eventually disembowelled for medical purposes – in Jane Campion’s new film The Power of the Dog, I thought of the kidnapped “Rabbit” in Aranyak. The Campion scene was also a reminder of the different contexts in which someone can be victim or prey: the bunny-killer is a shy, bullied young man who we are meant to be rooting for but who turns out to be steelier than expected. (Along similar lines, Aranyak ends with the suggestion – heralding a second season – that the “victim” from its opening scene may have become a threat.)

Much as I liked the threads that jostle for our attention over Aranyak’s eight episodes, I also fixated on a specific aspect of it: the repeated references to the much-feared “nar-tendva” – or “leopard man”, as the subtitles had it. This had me thinking about a 1943 film by that name, produced by Val Lewton, who was a master of low-budget psychological horror in that decade. 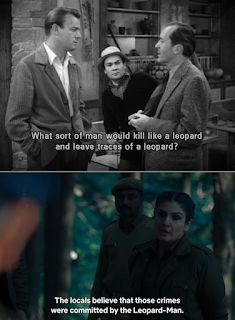 The differences between The Leopard Man and Aranyak are more pronounced than the similarities, given the changes in filmmaking styles and tones over eight decades (from the world of the 1940s B-movie to the polished and expansive OTT universe of today). The Lewton “flick” – as it would have been described by most people in its time – is in black-and-white, looks creaky to modern eyes, and at 66 minutes it is one-fifth the length of Aranyak. But like the new series, it involves a human criminal who may be using fear of the unknown – or fear of wild beasts – as a cover for his own dark pursuits.

Once a broad connection between two such works is made, other little things fall in place. Both film and show make references to wild creatures wanting to stay away from concrete and cement dwellings unless they have no other option. If the real leopard in Aranyak looks like a CGI creation (hence not “scary” to the eyes of discerning viewers), the black leopard shown in The Leopard Man is underwhelming too: it looks puny and out of its depth in a scene where a nightclub performer brings it (on a leash!) to a crowded party. In both cases, though probably unintended, the effect is that the relative harmlessness of the “wild creature” is emphasized. The bigger menace, as is often the case, comes from humans – especially when they combine the feral side of their natures with the big-brained ability to contrive and manipulate. Run, rabbit, run.

Posted by Jabberwock at 9:32 AM