The Green Knight – a short review of a lovely-looking film (watched in a movie hall!)

(I have a couple of short pieces in this week’s India Today. The first is this brief review of the new film The Green Knight. At the bottom of the post you can see a few images from a rare visit to a movie hall – the revamped PVR Priya, where the preview screening was held. I was there with Uday Bhatia, and apart from the film we got to experience a burger described as “an icon of layered circles that has made french fries famous”)

In one important sense, David Lowery’s The Green Knight is an easy film to watch: it is a beautiful sensory experience, especially if you’re brave enough to go to the theatre for it. The stately compositions and art design, the beautiful Irish settings (complemented by some computer-generated imagery that one might feel ambivalent about), the mesmerizingly dark, hushed tone – all this adds up to a sweeping canvas that never loses its intimacy. 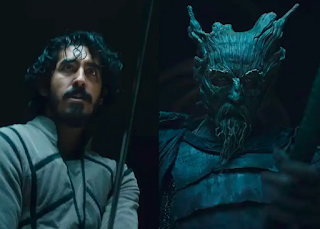 But in narrative terms, this medieval fantasy is determined not to make it easy for a viewer, even one who is broadly familiar with the Arthurian legends. For instance: early on, you’ll see King Arthur, Queen Guinevere, the Round Table, the sword Excalibur and even Merlin the wizard, but the film doesn’t underline who they are or try to give the viewer an “Aha!” moment. Also, if you have been mollycoddled by OTT films and series during the pandemic, consider yourself warned: here be no subtitles. You might feel the need for those, given some of the dense accents and even the rune-like chapter heads that appear on the screen.

Adapted from the 14th century Chivalric poem “Sir Gawain and the Green Knight” (which you might want to quickly look up beforehand), this is the story of Arthur’s nephew Gawain (Dev Patel) and his fateful encounter with the mysterious, magical Green Knight. A game of “exchanges” requires that after Gawain has beheaded this tree-like being, the latter will return the favour a year hence. Thus begins a version of the Hero’s Journey, with Gawain setting out to meet his nemesis and having a string of strange encounters along the way – including one with the ghost of Saint Winifred, and another with a red fox that might appear sweet until you realise it is CGI.

Without giving away spoilers, The Green Knight builds to a very moving climax that might remind some viewers of The Last Temptation of Christ (the book and the film), or some of the stories about “maya” (illusion) in Hindu mythology. By the time Gawain asks someone “Are you certain the Green Chapel is that close?” late in the narrative, we can tell that the Green Knight waiting in his “chapel” is a symbol for the protagonist’s personal arc. Does he choose a dramatic destiny or a safe one, and is it really possible to make such a choice? Or as another character puts it, “Why greatness? Is goodness not enough?”

But looked at from another perspective, those are very limited, human-centric themes. Given the altered Covid-19 world we live in, The Green Knight also feels like it is about something much bigger: our relationship with nature and our destruction of the ecological balance; about the “greenness” that we try to bend to our own puny wills. If you hack away at a green knight’s limbs, will it pay you back manifold? We are all learning the answer to that question now.

Regardless of how you interpret its meaning, this is a haunting film that rewards more than one viewing – as long as you don’t go into it expected a fast-paced, action-filled adventure.

Pics from a PVR Priya expedition with Uday Bhatia: 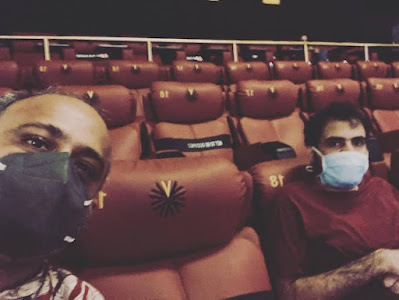 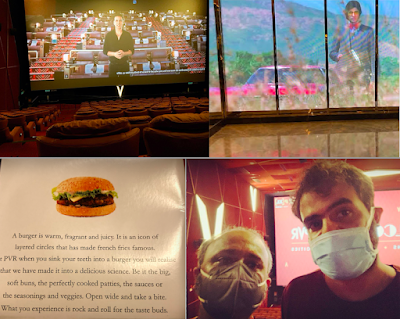 Posted by Jabberwock at 8:17 PM