Screenplays and petticoats: a book about Hindi cinema's women screenwriters 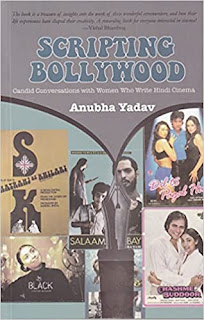 (Along with the Green Knight review [in the previous post], this is the other short piece I have in this week’s India Today – a review of Anubha Yadav’s very engrossing Scripting Bollywood: Candid Conversations with Women Who Write Hindi Cinema)

Juhi Chaturvedi says she reads dialogues out loud while writing them: “My staff sometimes comes to my room to check if everything is fine.” Shama Zaidi reads big novels non-linearly – “I decide how much I want to read and I read in stages” – and believes a web-series can be experienced the same way. Sooni Taraporevala decided to direct the film of her script Little Zizou because she wanted to maintain its quirkiness. Screenplay structure is like a petticoat, says Shibani Bathija – without it, “you will not get the form you need. The sari will fall right off”. The late Kalpana Lajmi says she finds depictions of romance in the films of Gulzar and Shyam Benegal dry, and that “there is more ras in a woman’s gaze”.

Little details like these – observations, back-stories, personal whimsies – provide the beating heart of this collection of interviews with 14 woman screenwriters. They give Scripting Bollywood the same free-flowing, unpredictable quality that Taraporevala wanted her film to have. 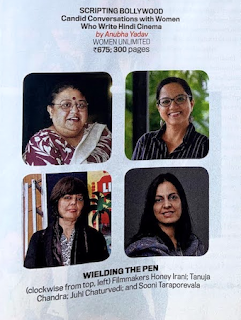 This book is a response to two levels of “invisibilising”: the neglect of, or glossing over of, a writer’s contribution to filmmaking; and the more specific neglect of female writers over the decades. The subjects include veterans like Zaidi and Sai Paranjpye as well as younger writers like Chaturvedi and Devika Bhagat who work in the exciting new worlds of the indie film and the web-series. This means that all sorts of cinematic idioms are contained here: from “parallel” to “commercial”, from overtly progressive films to the ones that get labelled “problematic” because of their politics. And the stories, personalities and viewpoints are equally varied.

Yadav invisibilises herself in a sense by presenting the conversations in the “as told to” format – we get only the voices of the subjects, which creates a hushed, intimate, stream-of-consciousness effect. Some writers speak a little more about craft or routines, others focus on formative experiences or influences. Rapports with directors – Urmi Juvekar’s work with Dibakar Banerjee, for instance, or Honey Irani’s with Yash Chopra or Bathija’s with Karan Johar – are discussed in terms of conflict or cooperation. Some see being a woman as central to their experience, others appear not to give it much importance. There are different perspectives on the female gaze in scriptwriting, and insights into the challenges of various periods in film history: here is Kamna Chandra relating how she wrote Prem Rog for Raj Kapoor, who made some changes “to suit a more mainstream film”; and here is Chandra’s daughter Tanuja, decades later, writing in the multiplex era or for independent American producers.

Importantly, before moving on to the main interviews, Yadav provides context about some of the women who played key roles – as producers, directors, writers, or sometimes all at the same time – in the early years of the talking Hindi film: figures like Fatma Begum, Ratan Bai and Jaddan Bai, whose contribution to screenwriting has barely been noted in the historical record. This is also a reminder of the value of the present book – and, hopefully, others that will follow it – as a chronicle of cinema’s undervalued creators.