Politicians and actors: notes on Thalaivii

(Did this piece about Thalaivii for India Today. Note: I watched the Tamil version with subtitles, not the Hindi version. Think that’s important to clarify since I suspect the effect would vary quite a bit for non-Tamil speakers. Watching the film in Hindi would make suspension of disbelief more difficult, you’d tend to see Kangana playing Kangana, and become a little more conscious of the politics of casting a well-known north Indian star as a south Indian icon)
----------------- 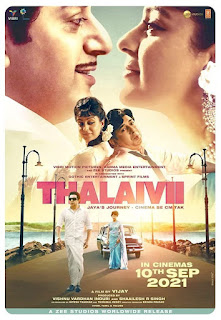 Two dramatic sequences – set 24 years apart – open the new Jayalalitha biopic Thalaivii. One of these shows the young Jaya (Kangana Ranaut) performing in the florid mode of 1960s Tamil cinema – writhing under a waterfall, jiggling her hips – and a glimpse of her soon-to-be leading man, superstar MJR (Arvind Swamy). But just before this comes a scene that is as theatrical in its own way. It is set in the Tamil Nadu legislative assembly in 1989 and depicts Jaya – new to politics – being manhandled during a scuffle between opposing parties. Whereupon she compares herself to Draupadi, with a fiery denouncement of men who don’t know how to respect women – and the implied promise of revenge.

This could be seen as a case of showboating by a former actress (who also worked in mythological films), but another way of looking at it is that all successful politicians – even the relatively restrained or “dignified” ones – are to some degree performers: putting on a show, presenting a version of themselves for public consumption. Films about politicians or lawyers, set in parliaments or in courtrooms, have always known this well. To watch Thalaivii is to be reminded (and this is independent of the film’s quality) that political arenas are theatres, and what happens in them – especially if you have followed Indian parliamentary proceedings over the years – can be more melodramatic, more outlandish than anything in an over-the-top film.

Those opening scenes suggest Thalaivii might go on to be a film about politicians as actors, and actors as politicians – a clever, insightful look at the workings of realpolitik. Instead it settles conservatively into a depiction of Jayalalitha as pure-hearted saint, wanting to acquire power only so she can use it for a good cause. One of the film’s conceits – a pleasing but over-idealistic one – is that a woman can help clean up politics through empathy and a willingness to go to the grass roots. (“I will never like or understand politics,” Jaya says at one point, but later an epiphany hits her when she realises how cut off MJR is from the people his party is supposed to be serving – and how a caring touch is required.) This results in a manipulative, one-dimensional film, full of shots of Jaya being talked down to or pushed around – the main agenda being to create sympathy for someone who is trying to bring compassion to a callous or apathetic space. 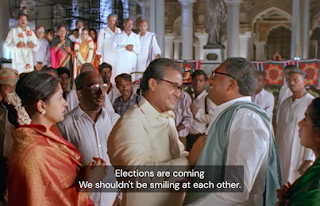 We don’t exactly have a tradition of robust cinema built around real-life political figures. One can’t help compare Thalaivii with Mani Ratnam’s 1997 Iruvar, a fictionalised account of the friendship between MG Ramachandran and M Karunanidhi (with Aishwarya Rai as a character who marginally resembled the young Jayalalitha). A confession: I spent the more tedious bits of Thalaivii day-dreaming about Iruvar. Part of the reason why that earlier film was so effective was that by shrugging off the need for saphead verisimilitude, it could reach for more poetic truths about friendship and politics, ideology and lived experience – while also revealing something important about 20th century Tamil history and the celebrity cult. Thalaivii, on the other hand, is supposedly a straight Jayalalitha biopic, and yet, in the interests of prudence, given the statures of the real figures involved, it slightly alters character names (MGR becomes MJR) and offers sanitised depictions of events along with a highlights reel of Jayalalitha’s life, built around this basic thesis: she is underestimated and patronised – but then she hits back and Shows Them All.

Worse, it does this lifelessly. What’s most surprising about Thalaivii is not that it is hagiographical, but that it is so dull. Kangana Ranaut has been such a controversial figure herself in recent times, using social media as a personal kingdom for shrill, gratuitous and self-aggrandising pronouncements, even being banished from it before making a dramatic return – the way Jayalalitha did at various points during her political career – you’d think the casting alone could make for an entertaining movie that moves through multiple layers of artifice, reality and meta-references. Unfortunately that doesn’t happen. For every playful touch (e.g. the teenage Jaya reading Caesar and Cleopatra as she prepares for a tempestuous relationship with a much older, deified man), there are ten other moments where the dialogue is tiresomely on the nose. (“Now respect has come from my heart,” Jaya says out loud when she finally deigns to stands up as MJR passes her – after he has made a dubious gesture of compassion towards an injured junior artiste.)

Tell, don’t show is mostly the motto here – and the showing, when it happens, happens in slow motion. During the duller stretches, it feels like the entire film was shot in that mode, each moment milked dry for emotional effect. Ironically, by presenting her only as someone who is constantly condescended to (“This is not a cinema shoot, why are you here?” Karunanidhi asks her when she comes to see MJR in hospital), and must goad herself to new heights in response, the film itself diminishes and makes her one-note.

P.S. I thought there were a couple of subtle Iruvar tributes – as in the staging of a scene where Karunanidhi feels slighted when an audience listening to his speech turns its attentions to MGR. And in the casting of Nassar as Karuna (he played the Annadurai figure in Iruvar).