The "30 years ago" series: my Guinness Encyclopaedia 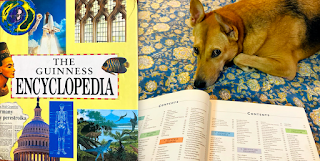 This big fat single-volume encyclopaedia was one of the most exciting things that happened to me in the summer of 1991. If it looks new for a book that has been collecting dust in a corner of my room for decades, here’s one reason: last week, for the first time, I removed the thin plastic jacket that had been wrapped around the book (with scotch-tape!) to prevent it from early wear and tear. (I don’t remember now if this is how the book was delivered to us, or if it’s something my mother did after it arrived – we middle-class soft-socialists routinely did such things to car seats and even sofa covers.) When the cover was off, along with the dirt trapped in it, the encyclopaedia was bright and shiny apart from a rip or a scratch here and there.

I don’t remember where we first saw an ad for it, but I know it was ordered (by “demand draft”, courtesy a visit to the Malviya Nagar post-office) sometime in early 91, and I had to wait many weeks before it was delivered – on April 30, my diary tells me. Other things I was doing that week included: watching a videocassette of Ajooba for a second time and feeling rueful that the film had been confirmed a “flop” (I wrote about this a few months ago); watching Afsana Pyaar Ka with its lilting “Tip Tip Tip Tip Baarish” song (in later years I keep confusing this film in my head with the Aamir-Madhuri-starrer Deewana Mujhsa Nahin); buying and obsessively listening to the audio-cassettes of soon-to-be-released films like Lekin and Saajan; continuing my discovery of writers like PG Wodehouse and Saki and Somerset Maugham; nurturing my recent interest in serial-killer literature, especially Jack the Ripper (and being very scared by the miniseries starring Michael Caine and the London fog); fretting about class tests and diligently listing the marks of at least 15 of my classmates whenever the results of any test, however minor, came out. 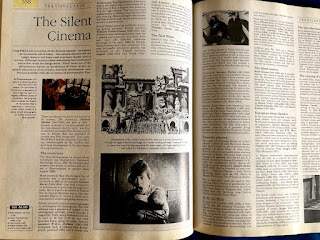 All of that faded into the background for a while when the Guinness Encyclopaedia arrived. I returned one afternoon from school to find it on my bed, and spent most of the rest of that day greedily flipping through it, marveling at the vividness of the photos and illustrations, the quality of the paper, the sheer size and breadth of the thing. (It was unquestionably the most expensive book that had ever been bought for me, priced close to 2000 rupees if I remember right.)

“The Guinness Encyclopaedia is a completely new kind of single-volume encyclopaedia,” began the introductory note by the editor, Ian Crofton. While other single-volume encyclopaedias were arranged as A to Z listings, “useful for looking up a quick reference or checking a fact, but unable to present the reader with a complete overview of a subject”, this one was divided into 12 main sections – the physical sciences, animals and plants, history, the visual arts, and so on, with each section then sub-divided into a series of indepth articles on key topics. "It does not just list facts – it explains them, and puts them in context." I remember being very impressed by this claim, and by the large, elegantly laid out Contents page that confirmed it. 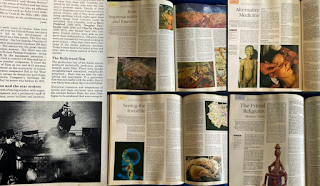 Some of the inside pages you see here are among the ones I returned to very often. When I opened the book recently – for the first time in years – the very sight of these pages (just the arrangement of the photos, the familiarity of the captions, a memory of seeing an action image of John Wayne in Stagecoach, long before I had watched the film) was a Proustian trigger. (Inevitably, since my Old Hollywood obsession began in earnest around the same time that the encyclopaedia arrived, I spent a lot of time looking at the film pages – not that there were many of them. A couple of the other, more prosaic-looking encyclopaedias I bought around the same time – the A-to-Z ones, like the Hutchinson Encyclopaedia – served the important function of telling me about the birth dates and years of the film personalities I was interested in.) 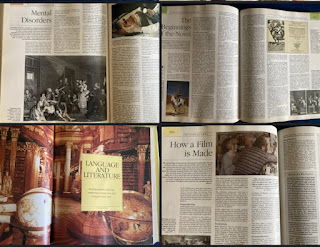 I don’t think my fascination with the book lasted more than a few months – and I never read a whole section of it from beginning to end (it was more about browsing through it a lot, and revisiting specific pages or sections) – but it had pride of place in the house for the longest time. It had a specific spot on a small table, and was never left lying around like the Wodehouses or Maughams or magazines or Archie comics. While other books could be reached for while lolling on the bed, picking up the Guinness and carrying it to a table to pore over it was a full-blown ritual; the size and weight ensured that. I had no idea back then what a coffee-table book was (and I’m sure we didn’t have any others in the house), but the Encyclopaedia was treated with the same care and respect that a very expensive coffee-table publication would be. I’m not sure it would make any sense to put it on a list of “My Favourite Books”, but it was certainly one of the most special.

Ten years later, when I left my first job at Encyclopaedia Britannica, a parting gift was the 32-volume set of the EB. Highly valued as that set is (both as a prestige possession and as an oversized memento of my time at Britannica), it was relegated first to a steel cupboard and later to a box-bed, and has stayed out of view for months at a time. But the Guinness Encyclopaedia remained in my room long after I had ceased reading it, usually in plain sight, as one of those things that can help raise a small table to a desired height, or as something to keep my laptop on. (Try doing that with Wikipedia.)

Posted by Jabberwock at 8:15 PM