Yeh dil maange gore: on marriage and homicide in Haseen Dillruba (and elsewhere) 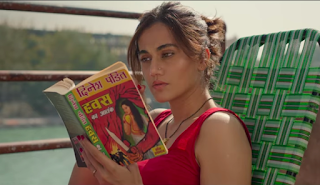 The climactic scene of the new film Haseen Dillruba involves inadvertent murder with a mutton leg – wielded, ironically, by a vegetarian – as the weapon. That detail probably comes from the famous Roald Dahl story “Lamb to the Slaughter”, which ends with policemen feasting on a heavy roast served to them in the house where they are investigating a murder. They wonder what and where the weapon is. “It’s probably right here under our nose somewhere,” one of them grunts as he digs into the meat.

“Lamb to the Slaughter” is one of a few blackly funny tales Dahl wrote about spouses who slay or torment each other – others include “The Way up to Heaven” and “William and Mary” – to go with his wicked stories about a by-product of marriage, children: read “Royal Jelly” or “Genesis and Catastrophe” to feel the shudder of revulsion that is exactly the opposite experience of looking at a cute baby and going “awley”.

But the Haseena Dillruba scene also involves something grislier – an act of self-mutilation, a chopping off of a human limb. And what’s more interesting: even as blood decorates the walls, this is a stirringly romantic scene. It is the moment when a marital pact is sealed, when two people know for certain that they belong together.

I was reminded of a similar moment in the climax of the 2001 Hannibal, adapted from Thomas Harris’s novel, the sequel to The Silence of the Lambs. Hannibal Lecter, having decided not to eat his long-time nemesis Clarice Starling, briefly transforms from psychopath to valentine, making a heart-warming sacrifice so he can escape while keeping Clarice intact in body and soul. This was a notable change from the denouement of Harris’s novel, which many purists had found unacceptable: Hannibal the book had ended, in the ornate prose that Harris had adopted by this time, with Lecter and Clarice together in a diabolical romantic relationship. (You could even think of it as a sort of marriage.) The film version reworked the ending to retain Clarice’s moral integrity. And yet, in its own way, the movie’s resolution is sexier than the book’s was. When Lecter brings his chopping knife down to a swell of lush music, it’s more poignant (if you’re a certain sort of viewer) than Jack letting Rose hog the wooden panel in Titanic.

In other words, true romance often goes surprisingly well with gore. There is a long line of literary and cinematic explorations of this idea, in different contexts: from couples trying to kill each other to those who bond by committing crimes or exploring the possibilities of folie à deux (a madness shared by two). A notable recent instance in Indian cinema was in Bhaskar Hazarika’s Aamis, which employs soft lilting music and a dreamy, Vaseline-on-lens aesthetic even as it tells the story of a man and woman who fall in love over her enjoyment of meat-eating (which leads to unsettlingly varied types of meat-eating).

In Haseen Dillruba, the protagonist Rani quotes her favourite pulp writer as saying that eternal love should be stained with a few drops of blood. The narrative isn’t unconditionally respectful of this insight – it serves as the build-up for a funny moment where a frustrated police officer explodes in anger – but it does suggest one way of looking at this film: Rani and her husband Rishu, divided by personality differences and social circumstances, find common ground as they become more amoral.

An earlier film also scripted by Kanika Dhillon, the wacky Judgementall Hai Kya, hinted that games of romantic one-upmanship can be a form of psychosis (as well as cathartic). Haseen Dillruba doesn’t live up to its promise – it is dull and plodding, which is especially disappointing for a film with so many references to lurid small-town detective novels. But there are flashes of something subversive in its depiction of two people in a regimented arranged marriage. You haven’t had any time to get to know each other, nosy in-laws are keeping an eye on your every move (so that a susheel ladki can’t even drop her pallu to excite her husband without her saas snapping at her) – in these circumstances, one way of creating adrenaline is by trying to kill each other (or fantasise about killing each other) in inventive ways. Put slippery paper soap on the stairs, or engineer a gas explosion – do this often enough and maybe she’ll find you irresistible (if she survives).

Its flaws notwithstanding, this film knows that marriage can be a cannibalistic endeavour in which two people gnaw at each other over the years, with results that can vary: you might leave each other depleted and hollow, or you may feel replenished and hungry for new adventures. I don’t know what Dinesh Pandit, the fictional pulp writer created for this narrative, may have thought of Rani and Rishu’s antics. But Roald Dahl, Patricia Highsmith (who once opened a story with the line “A young man asked a father for his daughter’s hand, and received it in a box — her left hand”) and other chroniclers of gruesome love would probably approve.

Posted by Jabberwock at 8:30 PM